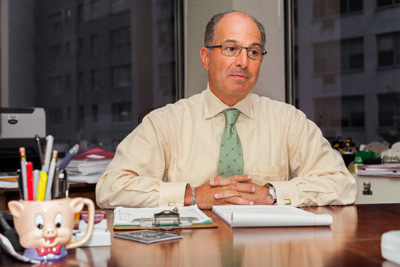 Partner and Chair of the Real Estate Group

What is the biggest portfolio loan deal you worked on this year, and what were the highlights of that deal?

We worked on a $2 billion first loan and second loan portfolio, which was secured by, among other things, approximately 400 grocery stores and distribution centers in 14 states owned by or purchased by Albertsons. Financing was provided by a syndicate of lenders led by Citibank, Bank of America and Merrill Lynch. The loans closed in April, but we are still completing the task of perfecting the mortgage liens since we closed in such a timely and efficient manner that not all of the mortgages were recorded at the time the loans closed.

This financing consisted of a $1.2 billion first mortgage lien and an $800 million revolving working capital second mortgage lien. A combination of real estate lawyers and corporate finance lawyers worked together to finalize the transaction. A major issue was how to close the loans in such a short time frame. It went remarkably well, and we closed the transaction in 60 days. One major reason that we were able to do so was the fact that we were dealing with lenders who were very cooperative in working with us to conclude the transaction in such an orderly and expeditious manner.

With big portfolio transactions like this, what points are most heavily negotiated?

Have the legal procedures and requirements for portfolio loan originations changed at all over the years?

We rarely hear about the possibility of a double-dip recession anymore.  Real estate professionals, for the most part, seem to believe that we are solidly entrenched on the road to recovery.  But lawyers still engage in conversations about the possibility of not being able to bridge the gap between the prolific amount of mortgages that will mature in the next few years and the refinancing proceeds that borrowers will be able to obtain when these loans come due.  If you look at the value of commercial real estate in 2006 and 2007 compared to now, you see that the appraised property values are still substantially lower. If you look at the loan-to-value ratios of loans being made by portfolio lenders, we are no longer at the 80 percent to 85 percent LTV levels of 2006 and 2007. We are closer to the 60 percent to 70 percent LTV range. If the values are less and the loan-to-value ratios are lower, there is a gap in the refinancing proceeds that are available when a loan on a commercial property matures.

Who’s going to bridge that gap? Will it be portfolio lenders, CMBS lenders, mezzanine lenders or preferred equity? I believe that private equity will be a major source to bridge this gap. Private equity is entrepreneurial, less risk averse and eager to put out money. Private equity is already replacing many institutional lenders in their activities and are a mainstay in the commercial real estate finance world.