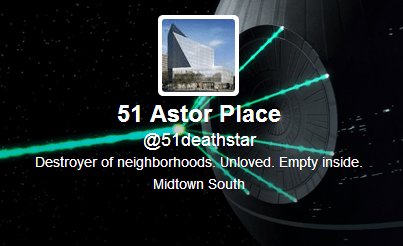 A new Twitter handle mocking the absence of tenants at 51 Astor Place has popped up under hashtag @51deathstar. “Destroyer of neighborhoods. Unloved. Empty inside. Midtown South,” reads the satirical description on the page, which has racked up 51 followers so far.

The person or persons behind the handle poke fun at Edward Minskoff’s so-called “spec tower,” which means he built it without any tenants signed on.

“I’m so depressed… Been thinking about demolishing myself,” read one tweet on the page earlier this month.

“Shhhh. I think I just heard a pin drop in my lobby,” read another.

The latest tweet: “’If you build it, they will come.’ I hate that movie.”

Jokes aside, months of speculation over pending deals at the tower have proven fruitless, despite Mr. Minskoff’s insistence in the past that, if you “build it,” they will in fact come.

“Tenants want to see a building,” Mr. Minskoff told The Commercial Observer in April, one month before the building’s grand opening. “They want to see reality. They don’t want conjecture.”

That article noted Mr. Minskoff’s ability to capitalize on building “spec” in the past. More than three decades ago he started construction on the sprawling, 7½-million-square-foot World Financial Center (renamed Brookfield Place), without a single tenant in contract, patiently securing giants like American Express, Merrill Lynch, Oppenheimer and Dow Jones as the development played out.

But 51 Astor is up and ready to go, still with no word of a deal. The LEED Gold-rated building towers above the rest of the neighborhood, where a 24-hour McDonald’s, a Ray’s Pizza and an array of small shops and restaurants harbor strong foot traffic that is accentuated by the perpetual buzz of college students.

Three storefronts wrap around the ground floor, and a school will occupy a second-floor space. A black-and-white granite lobby is anchored by a “14-foot candy apple red balloon rabbit” sculpture by Jeff Koons.

“51 Astor is among the most sophisticated office properties in the city, and it is an ideal location for a company that wants to leverage the creativity and energy of the surrounding neighborhood,” Mr. Glickman said. “We have tremendous leasing activity and we are currently in lease negotiations with three tenants for a substantial portion of the building.”

The @51deathstar page is following just one other user, a page belonging to the East Village/Lower East Side blog evgrieve.com. It was not immediately clear if there was any connection between the two pages.

This post was updated at 4:27pm, Thursday, August 29, to reflect a response from JLL.