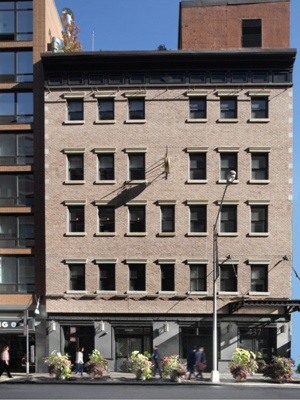 Restoration Hardware will launch its first commercial art gallery this fall at 437 West 16th Street under the auspices of RH Contemporary Art, an initiative aimed at increasing the visibility of international artists.

The company has signed a long-term lease for the five-story, 23,538-square-foot building owned by the Kleinberg family. Per a confidentiality agreement, specific terms of the deal were not disclosed. The building, located between 9th and 10th Avenues north of Chelsea Market, has undergone significant renovations but has retained many of its most distinguishing features including exposed wood beams and cast iron structures.

In order to accommodate the RH Contemporary Art gallery, the Kleinberg family, who had operated offices on the building’s fourth and fifth floors, needed to relocate. In a multi-layered transaction process, the property had also been marketed for potential sale by Newmark Grubb Knight Frank Capital Markets.

“The retail leasing team started on the transaction and then as they were in the market it became clear the overall demand for restored properties in the Meatpacking District was generating tremendous interest from investors,” Ken Zakin told The Commercial Observer.

Despite being marketed for sale, the Kleinberg family instead elected to lease the building to Restoration Hardware, using the proceeds of the deal to refinance the building.

RH Contemporary Art was launched earlier this year with the acquisition of the first edition of Rain Room by rAndom International. The piece, described as a large-scale environment of failing water that allows visitors to control the rain, was on loan at the Museum of Modern Art from mid-May to late July.

Mr. Schwartzman and George Graf of the NGKF retail team represented the Kleinberg family in the leasing transaction, reported yesterday by The Wall Street Journal. Mr. Zakin and Carol Ann Flint of the firm’s capital markets team marketed the building for sale and helped to arrange financing.