Elizabeth Berger, President of Alliance for Downtown, Dies at 53 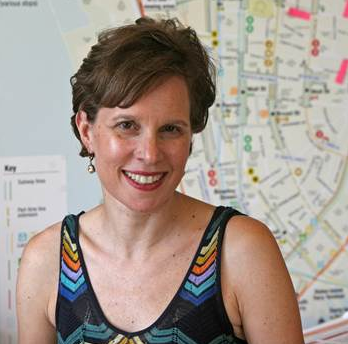 Elizabeth Berger, president and CEO of the Alliance for Downtown New York and president of the Downtown-Lower Manhattan Association, has died at 53 after a battle with pancreatic cancer. Ms. Berger helped shape the reimagining and rebuilding of Lower Manhattan after the 9/11 attacks and recently led a multifaceted effort to assist Lower Manhattan businesses and residents following Superstorm Sandy.

The Alliance remembered Ms. Berger for her “indefatigable energy and exacting intellect” in a statement regarding her passing, “driven by a vision of Lower Manhattan as a place teeming with vitality and potential and a proving ground for municipal innovation.”

“Liz Berger’s passion, sophistication and drive shaped Lower Manhattan as surely as any skyscraper or bull dozer,” said Robert Douglas, chairman of the Alliance for Downtown New York and the Downtown-Lower Manhattan Association, in a statement. “Her strength as an advocate and strategist was only exceeded by her loyalty as a friend and her dedication as a mother and wife. She will be sorely missed.”

Ms. Berger became president of the Alliance for Downtown New York, which promotes lower Manhattan through a variety of services, in November 2007, having previously served on its board for several years.

During her tenure, the Alliance and Downtown-Lower Manhattan Association successfully advocated for full funding and timely completion of the Fulton Street Transit Center; the reconstruction of Fiterman Hall; and the enactment of post-9/11 commercial leasing incentives.

The Alliance also turned construction sites into large-scale canvases for public art and was an early provider of free wi-fi service throughout the square mile of lower Manhattan below Chambers Street. It expanded its bus service, the Downtown Connection; established the Hive at 55, a co-working facility for freelancers and entrepreneurs; and undertook comprehensive planning studies of Lower Manhattan.

“What I love about Lower Manhattan is that it has the biggest buildings on the smallest streets,” she told the New York Times in 2010. “It’s an internationally known destination but it’s a little village… intensely walkable and at the center of a regional transportation hub.”

Prior to Alliance, she established and built government relations practices at the law firms Lord Day & Lord Barrett Smith; LeBoeuf, Lamb Greene & MacRae; and the law offices of Claudia Wagner. She also created the Department of Government and External Affairs at Lincoln Center and served as an Assistant Mayoral Representative to the New York City Council during the Koch administration.

At Yale College she graduated with the degree she created, The Study of the City, and she was involved in a variety of civic organizations in New York City. She was at various times a board director of The Municipal Art Society, Film Forum, Second Stage Theatre, American Museum of Natural History Planetarium Authority and the New York Building Congress. She was also a mayoral appointee to the board of the Trust for Governors Island.

“Liz Berger loved our City with passion and gave her great intelligence and inventiveness to New York without reserve,” Mayor Michael Bloomberg said, in a statement Monday evening. “She was more than an advocate for Lower Manhattan, she was a partner in building its future. As new transit hubs, skyscrapers, full access to our waterfront and a fresh vitality emerge downtown, Liz’s influences are everywhere to be seen.”

“We shared a vision of Lower Manhattan as a model 21st century business and residential district, and thanks to her tireless work, it’s being realized before our eyes. The City mourns the loss of a great civic leader,” he said.