Picturing the Office Stairwell of the Future 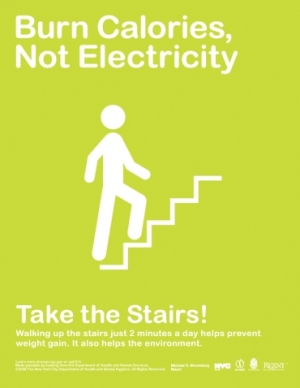 Instead of dark and drab, imagine the stairwell of a commercial building with windows looking out to the street and vibrant colors on the walls. These simple steps could be the first stages in promoting stair use in New York office buildings.

Earlier this month, Mayor Bloomberg announced that New York City would promote the use of stairs in buildings and public spaces through the Center for Active Design. In light of the announcement, Rick Bell, executive director at the American Institute of Architects New York chapter,  likened stair use to bicycling, a healthier, though not necessarily more popular, alternative to other transportation methods. “The idea of stair use is healthier and it is very, very similar to bicycling in New York,” Mr. Bell told The Commercial Observer. “Is it normal? Not quite yet.”

The Center for Active Design, a nonprofit resource for design professionals and developers, will promote, though not require, physical activity in buildings through building code and design changes.

In order to promote stair use, simple steps, such as leaving doors open or installing windows in stairways, could be effective, according to Mr. Bell. AIANY, for example, received fire code approval to hold the doorways open on the fire stairways with electromagnets.

“With the doors held open and more attention paid to paint color and lighting, stairs are more attractive,” Mr. Bell, a Center for Active Design board member, noted.

The installation of windows in stairwells would help to enhance tenants’ sense of security.

“If the fire stair is exiting outside and on the perimeter anyway, why not put a window in?” Mr. Bell questioned. “It gives people a sense that if something nefarious happens it might be seen by the outside.”

Despite the potential benefits, developers are not likely to expend large amounts of capital promoting stair use, industry experts cautioned.

“I don’t see developers spending a lot of money on this,” said Barry Hersh, an associate professor at NYU Schack and former real estate developer. “But, by adding it to the equation, they’re making it into a bit of a marketing amenity.”

Building design, which was once predicated on stair use, has focused more elevator transportation in recent decades. Older buildings, such as many hotels and the New York Public Library, included grand staircases in the lobby, a design trait that should be emulated, Mr. Bell suggested.