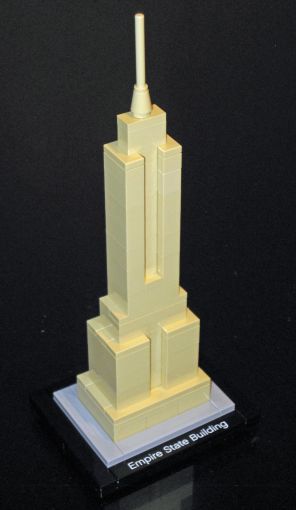 A modern building feat has occurred.

In a new YouTube video that surfaced yesterday, user “Homeschooledman” alleges that it took him just “five minutes” to build the Empire State Building – and it wasn’t even challenging.

Homeschooledman said he purchased the 77-piece plastic replica of the historic building – made by toymaker LEGO as part of the LEGO Architecture line – at the Lego store in Kansas City.

He awards the LEGO model 4.5 out of 5 stars (it looks great on his shelf), but the spire detaches from the rest of the building too easily, the structure lacks sturdiness, not to mention he didn’t break a sweat building it.

“Like I said, this is not a challenging build,” he says.  “It took me all of like five minutes to build.”

Calls placed to LEGO confirmed that the five minute build time was exceptional, but feasible after extensive training.  LEGO customer service adviser Katrina said she could probably pull through the build process in 10 minutes, but that her skill was a product of experience.

“If I were to give it to my mother it probably would take her hours,” Katrina told The Commercial Observer.  “If you have experience, I couldn’t imagine it taking any longer than 20 minutes.”

“The pieces are very small.  I will warn you of that… so it might be a little bit of a challenge,” added LEGO customer service adviser Anna.

Homeschooledman’s review of the product goes on to include a 360-degree look at the building, a measurement of its height, which shows that it is 18 LEGO Bricks tall (or four-and-a-half mini-figures) and a flip through the manual, which includes some fun facts about the building.

The Empire State Building (the real one), built in 1931, actually took 410 days to build, or seven million man hours, according to the manual.

“That is totally nuts,” says the host of the brickshow in a previous review of the model, worth a watch if only for its opening sequence.  “They built four-and-a-half floors per week… They were just like ants up there, just cranking away at the Empire State Building.”

LEGO Architecture celebrates the past, present and future of architecture using LEGO Bricks.  The LEGO Empire State Building runs about $20.