King of the Yard: Related’s Jay Cross on Reimagining the Far West Side 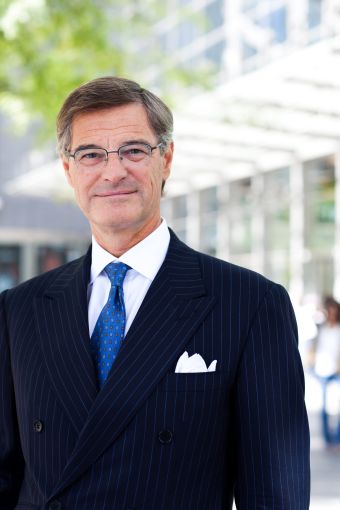 As president of the New York Jets, Jay Cross spent the first half of the 2000s immersed in the plans for the New York Sports and Convention Center on the Far West Side. The plan collapsed and the Jets’ focus shifted to the Meadowlands, but Mr. Cross kept eager watch on the Mass Transit Authority’s bid to find a new developer.

After Stephen Ross purchased the Miami Dolphins in 2008, Mr. Cross found himself fatefully reacquainted with Related’s founder and chairman through an assigned seating arrangement at an NFL owners’ meeting, setting the stage for Mr. Cross’s eventual role as president of Related Hudson Yards.

“The Jets always sat beside the Dolphins at these meetings, so I was sitting beside Stephen,” Mr. Cross said. “He asked me how I was getting home. He flew me home and said, ‘You should come and run this project for us.’”

Here’s what Mr. Cross had to say about the 26-acre, 15-million-square-foot mixed-use project that he began orchestrating on Manhattan’s Far West Side in the summer of 2008.

The Commercial Observer: Why does New York City need this project?
Mr. Cross: Any city needs to keep reinventing itself if it’s going to remain a vibrant center of commerce and living. You can look around and see cities that have fallen on hard times because they failed to do that. It’s a question of how we keep reinvesting in our residential stock, how we reinvest in our office stock and how we keep pace with the needs of commercial activities so that our city remains a vibrant competitor against cities around the globe.

One has to be mindful of what London is doing. There’s a stat out there (from Jones Lang LaSalle) showing that, between 1985 and 2010, London replaced 50 percent of its office stock and that we only replaced about 10 percent. In the late ’80s, most of the world looked to New York for state-of-the-art office buildings, and London was no exception. Now we’ve got some catching up to do.

You broke ground on the project with the 1.7-million-square-foot, 51-story south office tower late last year. What’s the status there, and how important was the commitment by Coach?
Its delivery is for mid-2015, and it should be occupied by the end of 2015. Next, we would hope that by January 2014 we would start construction to the north, where the foundations of the retail and the north office tower are.

The great thing about Coach is that they are already in the neighborhood, so we didn’t have to sell them on its potential. Nevertheless, it still took three years to convince them that we could pull this project off. It’s a big project. It’s complex, and most people think it’s got a lot of risk. They need to see some of those risk elements mitigated or removed before they make big commitments. It was important for Coach to see us do the deal with Oxford, see us go to contract with the MTA and to see us design a building with their involvement. That takes time.