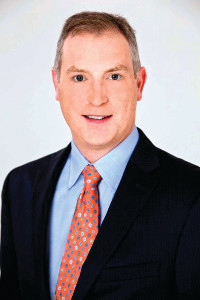 To cap off 2012, The Mortgage Observer spoke to Peter D’Arcy, a 17-year M&T Bank veteran who was recently promoted to regional president for New York City. Mr. D’Arcy spoke about his years with the bank, his new role and M&T’s plans to build its middle-market and health care lending presence.

The Mortgage Observer: How did you get started in the real estate business?

Mr. D’Arcy: My start in real estate goes back to me joining M&T Bank right out of school. This is the only company I’ve worked for in my professional career. I graduated from Vassar College in 1995 and came to M&T in a management development program. Coming into the bank, I didn’t have a business background at all. At Vassar, I received a classic liberal arts education, and at the time M&T had a strong focus, though not exclusively, on recruiting liberal arts students—people who were good communicators and writers and who could synthesize thoughts.

I started out in our retail banking business, which I did for a year, and then joined a newly created business banking group, lending to small businesses. That was exciting and gave me my first real experience on the lending side. I also worked in our foundation and community reinvestment group here in the city in my first few years with the bank.

In 1999, I came over to work in our real estate private banking lending business. That’s where I really got involved in real estate financing. About four years later, I became a manager of our New York City commercial real estate department.

I grew up in the city in a Mitchell-Lama building and went to high school at Loyola here in Manhattan, and that has actually been really important to my working with real estate financing. I have a very good understanding of New York, from the infrastructure to the cultures of different neighborhoods. Knowing how the city has evolved and how blocks have changed helps me pretty much every day with most deals.

What was your biggest accomplishment in your first few years working in commercial real estate?

The biggest accomplishment was establishing myself in the role. As somebody who was newer to the clients and the business, I had to hustle a lot. I was young, so part of that meant overcoming youthful appearance and proving myself as someone who good operators in the city could count on to help them accomplish what they wanted to with the bank. When you’re dealing with credit, especially, it’s a very experiential job where you need to know what happens when things don’t work out as well as when they do, and you need to know people.

Last week you became regional president for M&T Bank’s New York City market. How did that opportunity come about?

When M&T decided to acquire Hudson City Bancorp earlier this year, that allowed us to fill a big hole in our footprint, since we don’t have much of an existing branch network in New Jersey. Hudson City’s branch network fits like a glove into our footprint. Now our exercise is to build out a larger commercial bank in that region over the next few years. Part of that upcoming challenge involves Gino Martocci, who has been working as a regional president in New York. He’s been promoted to area manager in charge of New Jersey, New York, Long Island and Westchester. I will report to him as regional president of New York City. That’s the genesis of this opportunity.

What’s the scope of your new role and how will your day-to-day responsibilities differ?

We have a portfolio of about $8 billion in the New York area, and that includes commercial real estate, middle-market lending, not-for-profit lending, health care lending and small-business lending among other specialty business lines. The largest component of that is commercial real estate lending. My new role is overseeing those businesses and our overall activities in the New York City market, including integrating them with our recently acquired Wilmington Trust activities.

I’ll still be involved in commercial real estate lending, because it’s such a large component of our business in this market. But I’ll step back from having a day-to-day focus and now have a broader focus on all of our businesses in the marketplace. With those other responsibilities, I won’t be in as many initial deal meetings in a supervisor capacity the way I was before.

How does the market for commercial real estate lending look now compared to two years ago?

There is more liquidity in commercial real estate now, and with more investors coming into the marketplace, there seems to be a corresponding increase in the number of banks willing to lend. There are also more projects in the pipeline at the end of 2012. A year or two ago, our competition was very thin. Now there are a greater number of banks actively participating in the market, but there still is not an overwhelming amount of capital available for anything other than stabilized deals. It’s nowhere near where it was in 2006 and the beginning of 2007.

What’s on the horizon with the recent acquisitions at M&T and the new roles for you and your colleagues?

In a nutshell, we have a really strong business in New York. Going forward, we want to focus on continuing to build our middle-market and specialty business lines like health care and private banking lending, so that’s something that’s in the works.

Middle-market and health care lending are core competencies of the bank in general, but have traditionally not made up a majority of our outstandings in the New York City market. But this is quickly changing as these businesses continue to grow and expand. We have a lot of existing traction in building these commercial businesses and tremendous upside, given the size of the regional market and the bank’s strong reputation in these business lines.