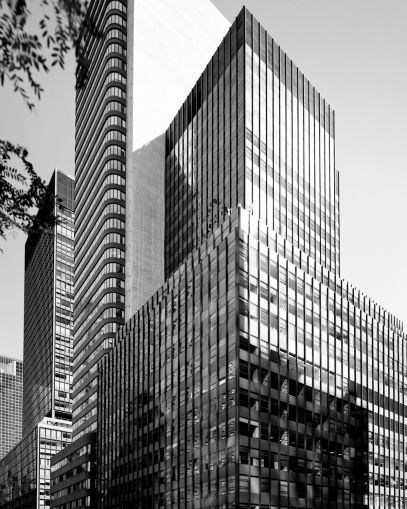 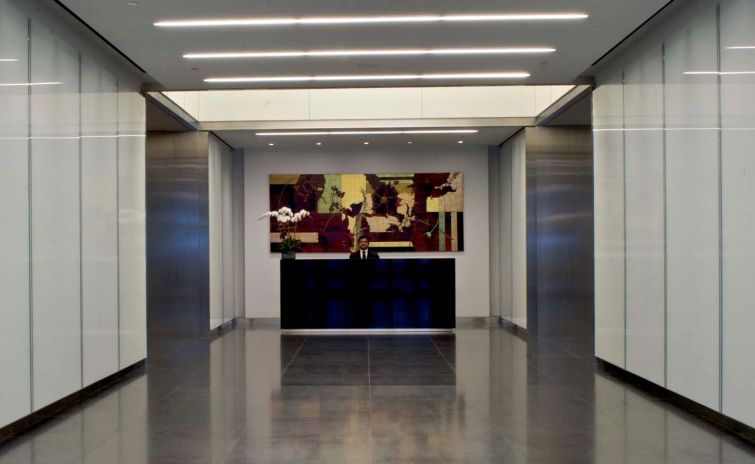 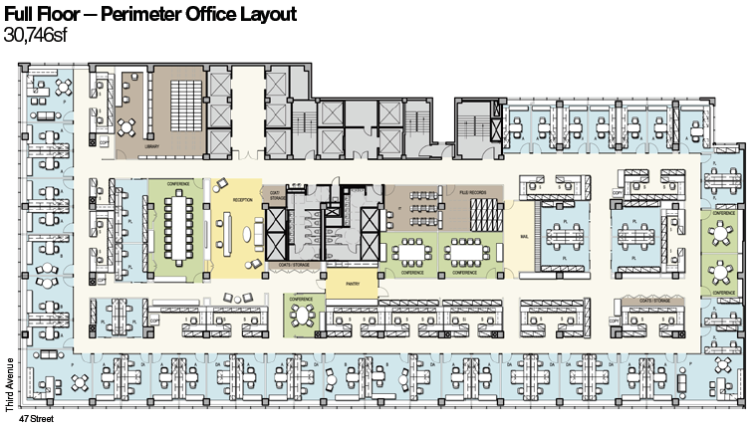 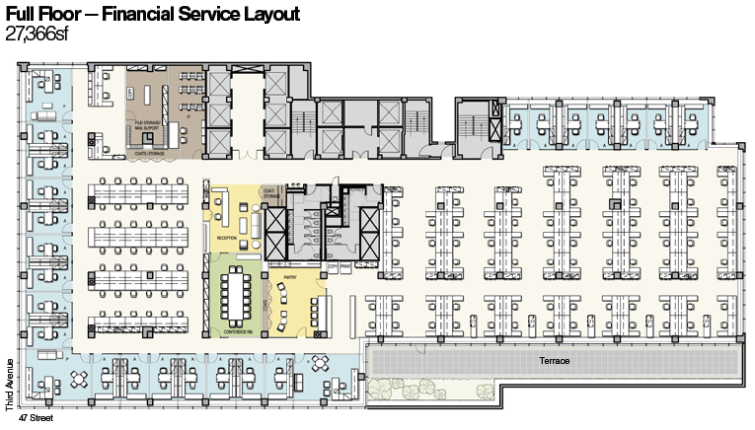 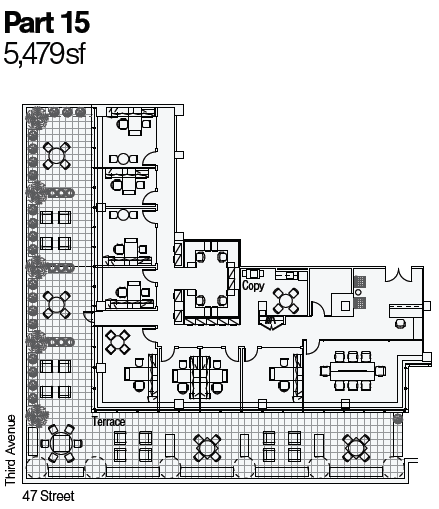 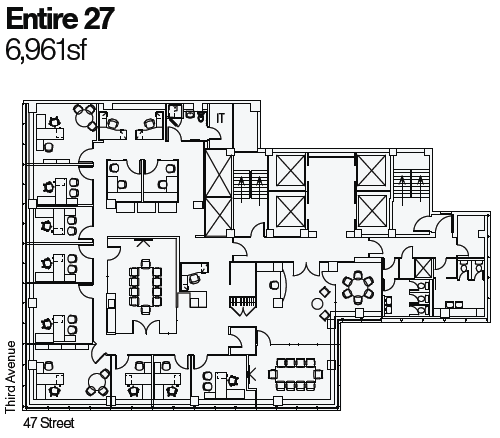 From the moment you walk through the doors of 757 Third Avenue, you know the building is different from the average, anonymous East Side office tower.

One of the lesser works of the monolithic Emery Roth & Sons—they of GM and Look and Pan Am buildings fame—757 Third is the typical wedding-cake office building. A banded obsidian glass curtain wall with those I-beam mullions, it is the sentinel we’ve seen before, cast ever so slightly anew in a thousand business districts the world over. Seagrams lite with a splash of Chase Manhattan.

That is why walking into, or really out of, 757 Third is such a dramatic experience. The 28-story building may have the nicest revolving doors in the entire city. Set into two curving, scythelike glass panels, the building’s egress does not really have an edge, and so when stepping out onto the street through those spinning doors, it is as though the building suddenly disappears. You have left the warm confines of this sleek building and are back on the cold New York City street. You might even stop to gasp at the trick if the door were not coming up behind you, about to deliver a smack in the toosh.

It should come as no surprise that the man responsible for the transformation of one of Midtown’s many dowagers is that slick rick of midcentury Manhattan, Aby Rosen. Having worked his magic on Andy Warhol and Lever House, he is using the same touch on his lesser projects, as well, as his firm, RFR Realty, sets about retrofitting and retenanting 757 Third.

“It’s an RFR building, and this is what we do,” Sheldon Werdiger, director of marketing and design at the firm, said during a recent tour of the building. He was standing on the sidewalk, just come out from those revolving doors, and was gesturing at the facade, which had recently been cleaned. Instead of peeling back the skin of the building, as has been done on so many other aging Midtown towers, RFR decided its was in good enough shape to keep intact. “It has the right look and the right feel, and we didn’t want to diminish any of the work that Emery Roth had done,” Mr. Werdiger said.

The storefronts have been refaced to create a fresher appearance at the sidewalk and greater curb appeal for retail tenants. Wells Fargo has already taken the corner. Over the magical revolving door hangs a new canopy, where Steve Morrows, RFR’s co-director of leasing, said a major tenant’s name could go, one of many name-branding opportunities offered by the developer. (The building is also being represented by Jones Lang LaSalle.)

The inside is pure RFR, as well. “We have a very clean, I don’t want to say minimal, but our aesthetic is very sleek,” Mr. Werdiger said. The lobby floors are black granite, the walls white marble. A signature artwork—rotating through Mr. Rosen’s collection—hangs behind the welcome desk. Warm tropical woods encase the elevator core.

Upstairs, nearly half the 500,000-square-foot building is available, including a 193,000-square-foot block spread between lower and upper floors catering to a marquee tenant. The building stretches along 47th Street, with numerous setbacks alongside shorter buildings providing light on almost all four sides, and a narrower floorplate offering a brighter workspace than some deeper buildings. The space has been configured for financial, legal or media tenants. Other corners of smaller space have been broken down into prebuilts, which RFR has designed in-house, doubling as a showcase for its own designers, who will help clients fit out the space, always in the RFR style. “You won’t find anyone else doing it this nice,” Mr. Werdiger said.

The buildings unusual stepped backs and cutout create a number of unique opportunities, allowing for six different corner offices and terraces on five different floors, all clever uses of space that had once been ignored as ancillary.

Mr. Morrows points to this as the last great opportunity on Third Avenue, as 777, 807 and 600 have all filled up. “In the balance of the recession, a substantial amount of space on Third Avenue has turned over,” Mr. Morrows said. “If you want to be here, in a quality building at a good price, this is it.”

Aby Rosen and his team at RFR have polished up this Mad Men-era classic.
The lobby has been transformed with new materials and a sleek new design.
A layout on the third floor, the largest in the building.
On the ninth floor, the first of the building's terraces opens up.
A corner terrace on the 15th floor, where a partial floor is available.
The 27th and final floor.
757 Third Avenue, Aby Rosen, MOED de ARMAS, RFR Realty, slideshow
Finance  ·  Acquisition
Oklahoma