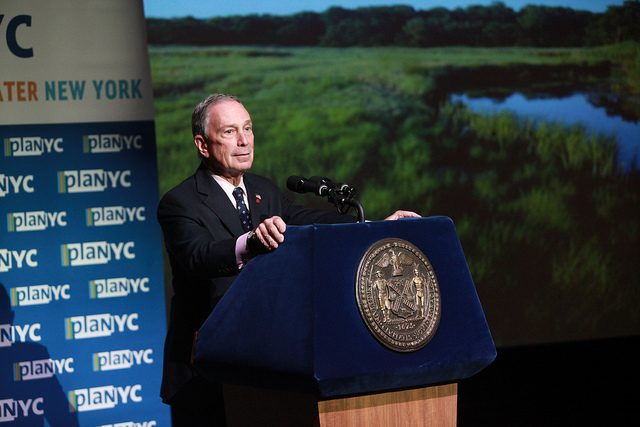 Mayor Michael Bloomberg visited Harlem today to unveil a “clean heat” campaign and other green initiatives that will become part of the PlaNYC plan, which is aimed at building “a greener, greater New York.”

The event, at Harlem Stage, gave away free reusable water bottles to the media, and distributed press releases on individual flash drives rather than on paper. A high-definition slideshow of natural and city scenes played as the mayor spoke about the updates to the plan to make New York “the most environmentally sustainable 21st-century city.”

The clean heat campaign is a public/private initiative that will phase out low-grade heating oils, which contribute to air pollution, in city buildings. The mayor also hopes to install solar panels over landfills, and potentially on some city rooftops as well. He also announced that the city will use $40 million in federal stimulus funds to help property owners make energy-efficient upgrades.

PlaNYC was launched in 2007 to increase the city’s long-term sustainability, and specifically aims to have one million trees growing in the city by 2017 and reduce carbon emissions 30% by 2030. The mayor must update the plan every four years.