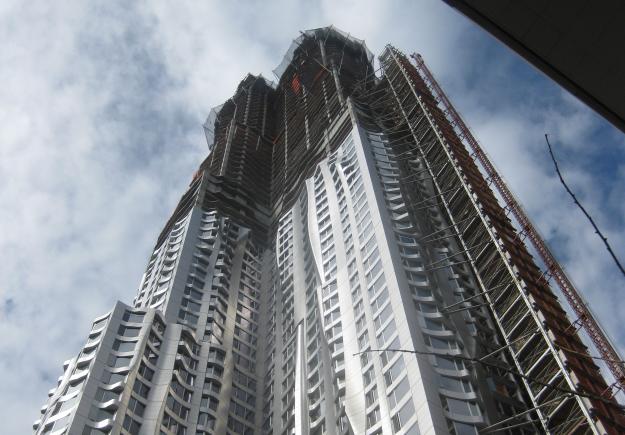 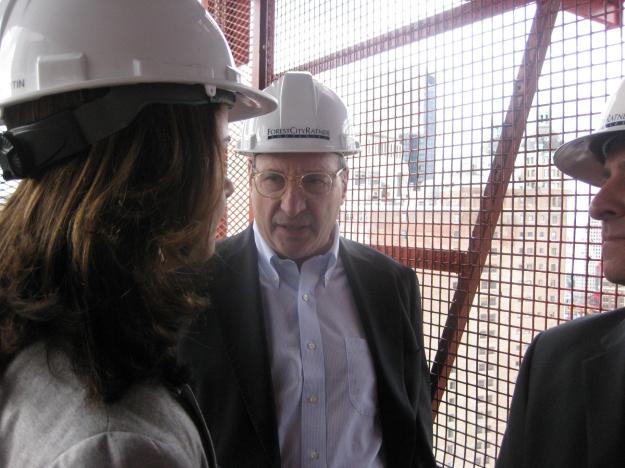 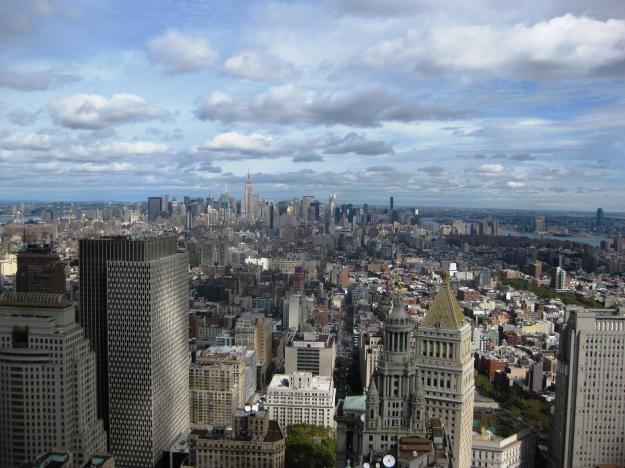 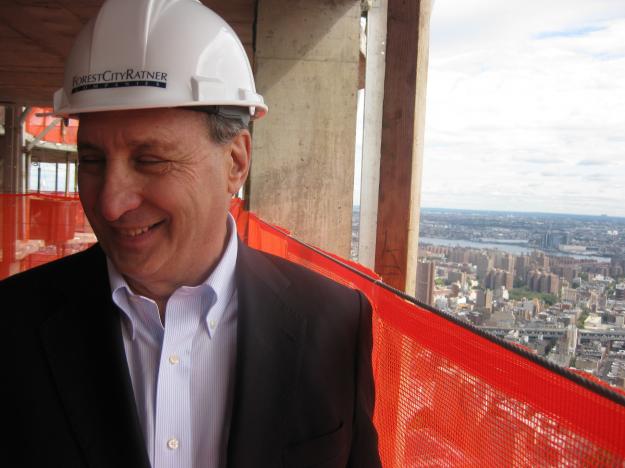 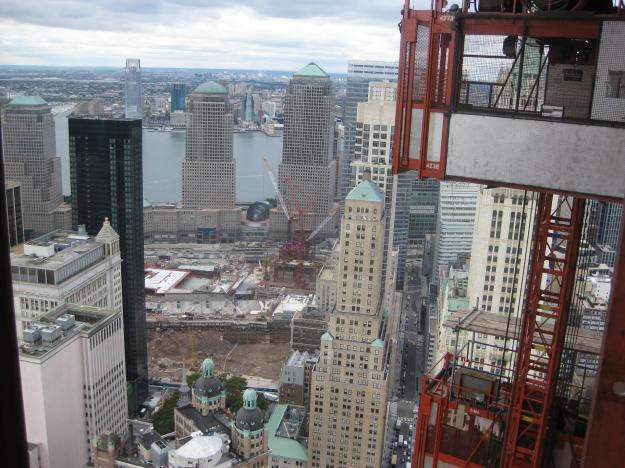 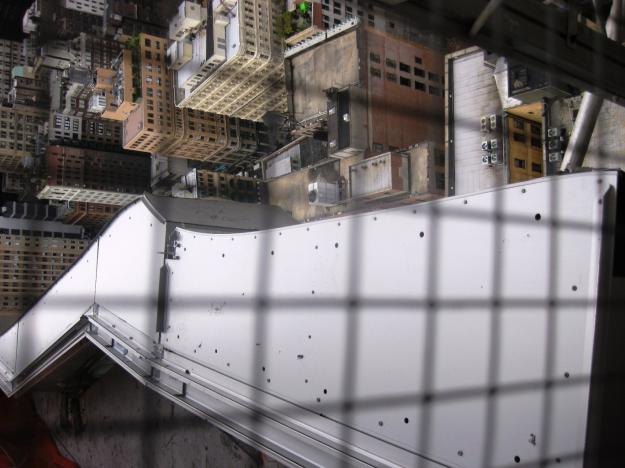 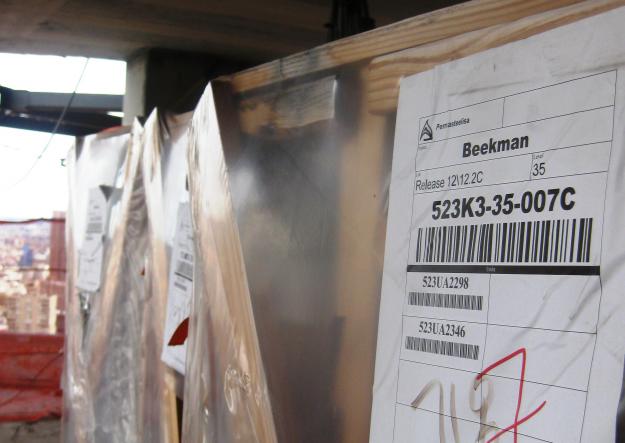 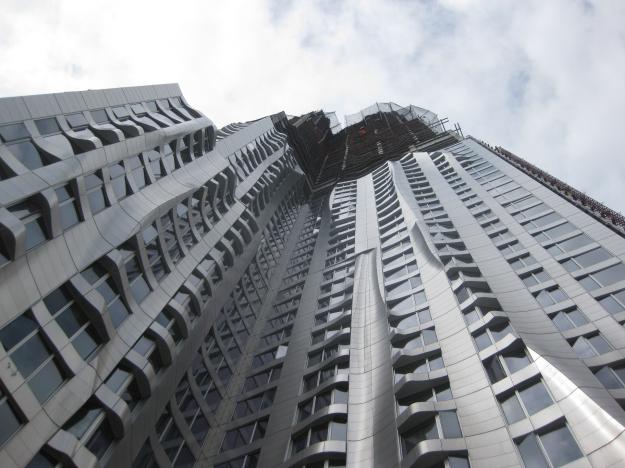 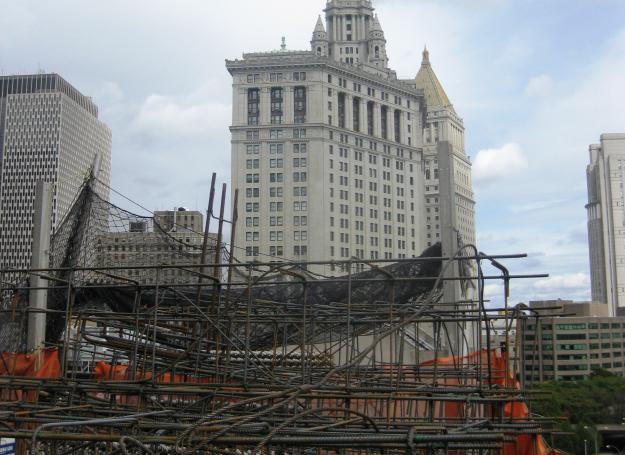 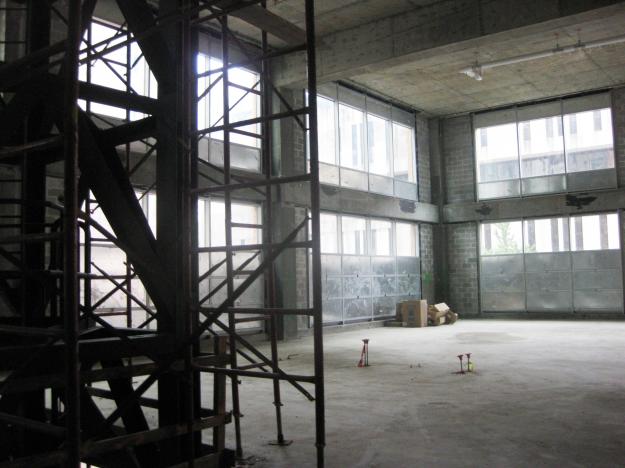 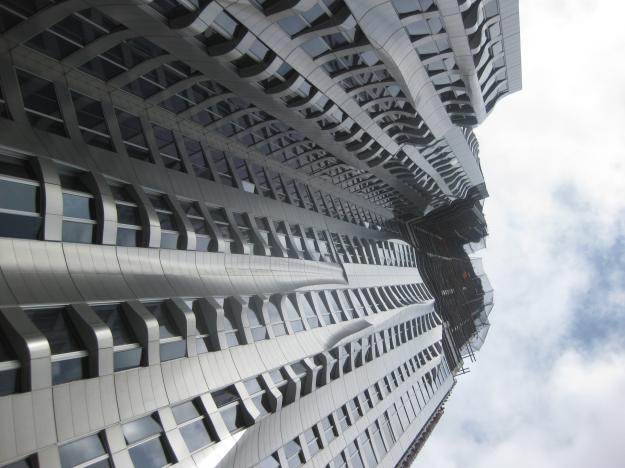 To anyone who treks west over the Brooklyn or Manhattan bridges each morning, a quick glance to the area just south of the Municipal Building will reveal a new addition to the Lower Manhattan skyline: a skinny, tiered concrete skeleton that's rapidly climbing upward.

The apartment tower-to-be—67 stories as of Wednesday—is a high-end rental building developed by Forest City Ratner, the firm that is desperately trying to build a new Nets basketball arena and accompanying 16-tower development near Downtown Brooklyn. And it is also—as the distinct, undulating aluminum façade now rising on the building's lower half might suggest—designed by Frank Gehry, his first residential high-rise.

(Forest City, to much criticism, dropped Mr. Gehry earlier this year from the Brooklyn project after years of planning, design and salesmanship in an attempt to significantly lower costs.)

On Wednesday, we got to take a look inside the tower, simply called Beekman, where Bruce Ratner, Forest City Ratner chairman, led us up to snap some photos a few floors shy of the top.

The crane was shut down for high winds when we went up, so the building was halting its growth for the day. It usually adds a floor every two days, though windy days are not that uncommon. The project’s construction manager, Joe Rechichi, said he anticipates a topping off in November.

No surprise here: The views are pretty stunning up top.

The Beekman tower will be the tallest residential building in the city at 867 feet (77 stories), and, a block east of City Hall Park, it stands separate from the other two clusters of Lower Manhattan’s skyscrapers (the financial district to the south, and the World Trade Center site to the west).

Originally, the top 200 apartments were to be (high-priced) condominiums, though Forest City ultimately changed course—probably a good decision given the status of the Manhattan luxury condo market right now—opting to make all 900 apartments in the building rentals.

The project is perhaps not the best-timed development in the world. It was the last residential building to receive a batch of tax-free bonds that were issued to help Lower Manhattan recover after 9/11—it got about $200 million in tax-free “Liberty Bonds”—and the bulk of construction didn’t start until spring 2008, after the economy had already begun to wane. (Forest City was first named winner of the property back in late 2003 in a complicated deal with the property owner, NYU Downtown Hospital, and Pace University, which was to take space in the tower.)

Mr. Ratner estimated that prices on rentals have dropped about 15 percent since when the company set up financing in 2008, and it’s of course hard to say where they’re going.

Just how expensive will the luxury rentals be?

“The market will drive it in 2011, when it opens,” Mr. Ratner said. “Hopefully, the city will be creating jobs again.”

There was a while when it was unclear whether or not Forest City was going to build out the tower in full. Back in March, it stopped construction as it tried to renegotiate costs with unions and contractors, bringing down prices (labor was working on a project-by-project basis on an agreement to lower costs).

Ultimately, Mr. Ratner got enough of what he wanted, and agreed to finish the building as planned with what he said were about 10 percent lower construction costs.

“About 80 percent of that savings came from the unions,” he said, a dig at construction management, from whom he wanted greater concessions. “I don’t think the contractors reduced their savings that much.”

Forest City hasn’t said the total cost of the project, but it has $680 million in debt financing ($200 million of which is exempt from city, state and federal taxes), and $35 million in mezzanine financing from the National Electrical Benefit Fund (which is also an equity partner).

A bit of a complicated view here—this is a cross section of the curtain wall, with the photo shot through a wire screen. We’re on the 35th floor, the top floor to which the aluminum and stainless steel skin has climbed so far. Each apartment along the faces of the building that have the undulation (the south side is flat) has its own unique shape, as the edges of the apartment curve more or less with the exterior.

The curtain wall comes from all over—Michigan to Florida to here—and is all custom made for each slot. Here’s a box with some siding awaiting installment.

The inspiration for the exterior was drapery in a marble sculpture by 17th-century artist Gian Lorenzo Bernini, according to an architectural statement released by Forest City and Frank Gehry’s office.

“Frank always told me that it gets more interesting as it goes up," Mr. Ratner said of Mr. Gehry, looking up at the curtain wall.

"Frank works with models," he said. "He works by models and drawings that he thinks are beautiful, and then he tries to make them into a building. So we worked with different ideas—at one point it was a building that twisted around and around like a corkscrew, and it was really beautiful, really nice. The problem was, in a building, you have to line up all the bathrooms and all the plumbing and we couldn’t come up with a way to do that.”

Unlike many iconic planned towers, the unveiling of the designs for this tower went without a celebratory, pomp- and speech-filled event. The reason: The event was planned for May 30, 2008, but a few hours before the unveiling, there was a fatal crane collapse on East 91st Street. The announcement of construction of the city’s tallest residential tower was called off.

Here’s the pool deck (for residents), looking out over the Municipal Building. The rebar is lounging here until it goes up to the top.

To win the site, Forest City pledged a new public school in the base of the building, for which they would pay for the core and shell. Here’s the gymnasium.

Opening day is a ways off. The company plans to open the first units around March 2011.

City May Pay Ratner for Infrastructure Work on Atlantic Yards

Will Commercial Real Estate Be the Economy's Next Shoe to Drop?