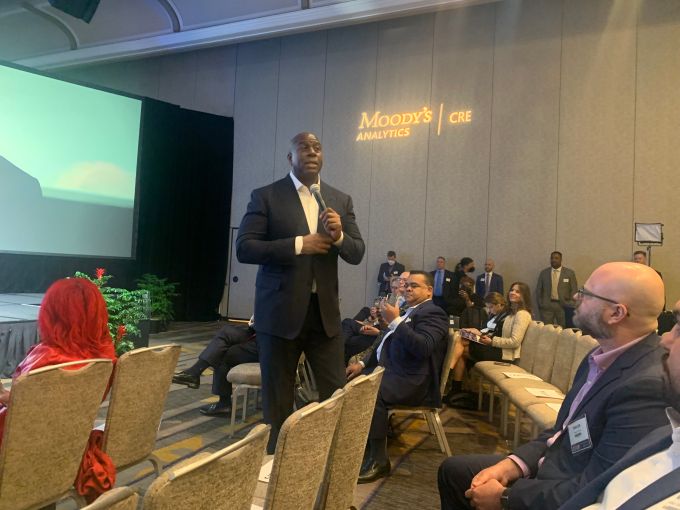 Magic Johnson, who has spearheaded developments in underserved urban communities in the decades since his ending his legendary NBA career, is pushing for more investments from commercial real estate into initiatives that benefit minority areas.

The five-time NBA champion with the Los Angeles Lakers said at Monday’s Mortgage Bankers Association CREF conference in San Diego that his successful efforts starting in the late 1990s to build Starbucks in the inner cities through Magic Johnson Enterprises (MJE) proves that investing in largely ignored neighborhoods can pay dividends for corporate America. Johnson noted that soon after convincing then-Starbucks CEO Howard Schultz to partner on delivering the coffee giant to ethnically diverse communities like Harlem, his stores were outperforming the chain’s suburban locations on a per-capita basis.

“We wanted the best of the best, but we had to drive outside our community to get it and so I wanted to make sure that we talked about that type of spending power,” Johnson told an enthusiastic gathering of CRE finance professionals about his early days as an entrepreneur convincing companies like Starbucks take more stock in Black neighborhoods. “I knew that my company was going to be successful so I just had to partner with experts.”

The discussion with Johnson was moderated by Kristy Fercho, 2022 MBA chair and head of home lending at Wells Fargo.

Johnson, who was inducted into the Naismith Memorial Basketball Hall of Fame in 2002, acquired and eventually sold 125 Starbucks locations as the only franchisee in the company’s history. He has formed a number of partnerships through MJE such as an alliance with Sony Pictures to develop Magic Johnson Theatres, which are now controlled by AMC Entertainment Holdings.

The successful entrepreneur, who is a part-time owner of the Los Angeles Dodgers, said Harlem is a perfect example of how investing in communities of color can pay off for the CRE industry. He opened a Magic Johnson Theatre in Harlem in 2000 and the community’s first Starbucks in 1998, which he said served as a catalyst for even bigger developments.

Developments have also sprouted up in Chicago’s South Shore neighborhood and South Central Los Angeles, which Johnson said is all the result of those initial decisions by the real estate community to back new projects there. He said lenders can play a vital role in continuing the momentum in minority areas.

“When I look at what I was able to do for the last over 30 years and to see that our community now has quality retailers and housing options that we didn’t have before,“ said Johnson of progress he has seen the past three decades. “Now we have to ensure that we get the loans.”