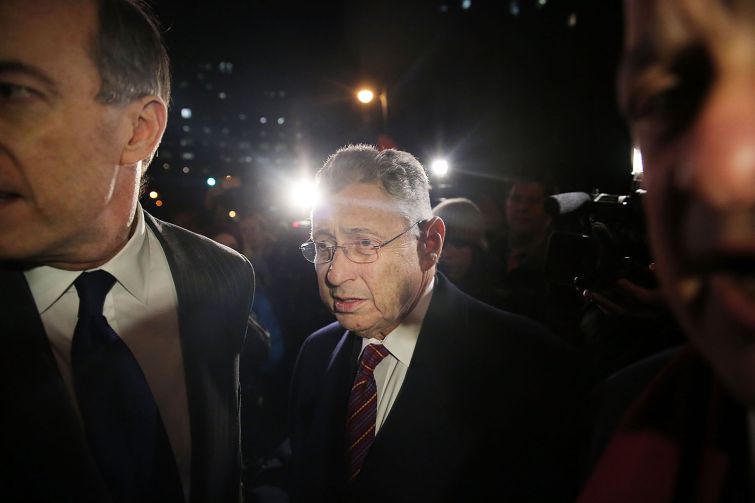 Disgraced former New York Assembly Speaker Sheldon Silver, once one of the most powerful people in the state, with veto power over vast projects and spending, has died in prison at 77 years old, sources close to the family told NY1 on Monday afternoon.

Silver was serving a six-and-a-half-year prison sentence after being convicted of receiving bribes that he attempted to pass off to authorities as legal fees. He resigned from his speaker role in 2015 after an indictment and was imprisoned since August 2020.

The U.S. Bureau of Prisons confirm Silver’s death on Monday as an inmate of the Federal Medical Center in Devens at the Nashoba Valley Medical Center in Ayer, Mass. They did not confirm whether or not it was due to natural causes.

He was elected in 1976 to represent Lower Manhattan in the state Assembly, and rose to the rank of speaker by 1994, becoming arguably the most powerful man in Albany. He was a figure that both tenant advocates and real estate developers turned to when they needed to get something done, and played a vital role in keeping what later became Essex Crossing as empty lots as he tried to get his vision for the site realized.

However, his Teflon-status ended in 2015 when federal prosecutors threw the book at him for receiving pay from a law firm that sought special reductions in New York City real estate. These were not revealed on his annual financial disclosure.

“He was a fighter for his constituents and his work to rebuild lower Manhattan after the terrible events of 9/11 will never be forgotten,” sitting Assembly Speaker Carl Heastie said. “I will remember Shelly for his many legislative accomplishments. For years he was the lone voice in the room pushing back against many regressive policies that would have harmed so many New Yorkers, and he presided over landmark laws to improve the lives of our most vulnerable residents.”

After being convicted of seven federal charges, Silver attempted to appeal his case after the Supreme Court’s ruling in a similar case involving Virginia Gov. Bob McDonnell. While his original conviction was overturned, a second trial by federal prosecutors secured another conviction in May 2018. He remained out on bond while he tried to appeal the second decision, but finally started his jail term in August 2020.

Despite his fall from grace, one New York legislator reacted with praise for Silver’s track record fighting for issues in New York such as Democratic Assemblymember Kevin Cahill who represents Kingston, N.Y.

“Sheldon Silver, a proud product of his neighborhood in lower New York, never forgot his origins and never let his love for the communities he represented be compromised,” Cahill said. “He helped with hospitals, community centers, childcare, expanding tourism and helping local direct care workers earn a dignified wage, to name but a few items. He gave voice to constituencies across our great state who otherwise might not be heard. My deepest sympathy to his large, close-knit family and also to his friends, many of whom are lifelong, loyal and today mourning the loss of, in Shelly’s words, a real mensch.”

Silver was born Feb. 13, 1944, in the Lower East Side to Orthodox Jewish parents who immigrated from Russia. He graduated from the Rabbi Jacob Joseph High School and then studied at Yeshiva University. He earned a bachelor of arts in 1965 and later got his Juris Doctor degree from Brooklyn Law School in 1968.

After Brooklyn Law School, Silver went on to practice law with Schecter and Schwartz until 1971, then served as law secretary for city Civil Court Judge Francis Pecora from 1971 to 1976. He left that post to run for state Assembly.

After being elected to office, he was assigned to the Assembly Ways and Means Committee where he was chair. In 1994, when Speaker Saul Weprin died, Silver ascended to the role he would have in government until his ouster in 2015.