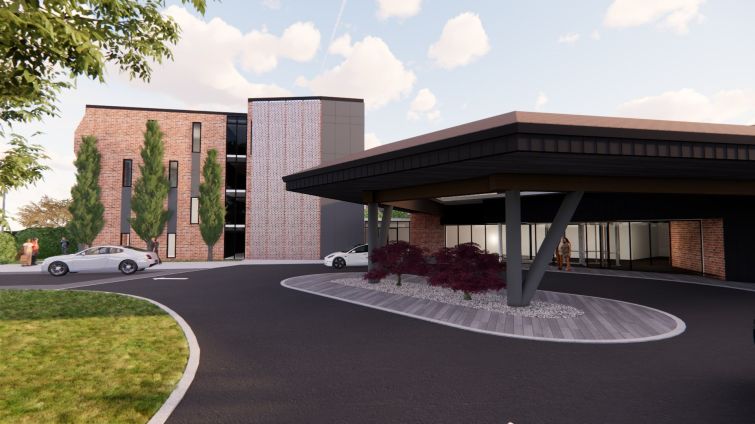 A rendering of the frontage of the redeveloped Hartford Marriott Farmington hotel in Farmington, Conn. Photo: Kriss Capital

New Jersey-based CSRE is planning to flip the vacant, 381-key Hartford Marriott Farmington hotel at 15 Farm Springs Road into a multifamily development with 225 market-rate units, according to information from Kriss, which primarily focuses on providing debt on ground-up construction, renovation and adaptive reuse jobs on residential assets.

The lender closed the two-year, floating-rate mortgage in five weeks.

CSRE recently acquired full ownership of the asset from Copperline Partners, which spent about $10.5 million earlier in the summer to buy the hotel not long after it had closed completely in May. After buying the hotel, Copperline developed a business plan and construction timeline, and secured zoning approvals and the necessary entitlements from local authorities to move forward with the redevelopment. With this financing, CSRE will now be able to pick up where Copperline left off.

Officials at CSRE and Kriss declined to provide any information related to Copperline’s sale of the property to CSRE, other than the latter was brought in by Meridian Capital Group to buy it after the former decided not to proceed with the development itself.

An executive at CSRE, who declined to be named, said the firm is “excited to execute Copperline’s vision, and it’ll come with our flavor as well. Completion is expected in the next 12 to 18 months. It’s a really nice project and a unique asset in the market given the amenity space. We’re getting started real soon and hope to get some occupancy within seven to nine months.”

The planned project will include a mix of studios as well as one-, two- and three-bedroom apartments; and the former hotel’s community amenities, including a fitness center, indoor and outdoor swimming pools and event space, will be upgraded. The property will have coworking space, outdoor dining, electric vehicle charging stations and 512 parking spaces. Copperline had also been planning to develop a coffee shop and restaurant within the three-story property.

Kriss Capital Founder Jody Kriss told CO through a representative that Copperline “did a great job getting the entitlements from the town and creating value. Now, CSRE has to execute the original business plan that Copperline put in place.”

“We expect this newly renovated property will attract significant attention and demand, given there has been virtually no new housing stock delivered in Farmington within the past few years and there is no multifamily product currently under construction or in the development pipeline,” Kriss added. He said that CSRE’s track record in renovating and repositioning multifamily properties in the Hartford region helped them get comfortable with the loan opportunity.

Copperline Principal Jason Schlesinger told the Hartford Courant earlier this year that the plan was to reposition the hotel as quickly as possible, targeting an opening of early 2022. In June, shortly after his firm bought the shuttered hotel, Schlesinger projected monthly rents for the new apartment units would range from $1,100 for studios to around $1,800 for two-bedrooms. The monthly rate for three-bedroom units was unclear.

Executives at Copperline could not be reached for comment.