The loan is secured by a roughly 488,000-square-foot portion of the enclosed regional mall in McLean, Va. 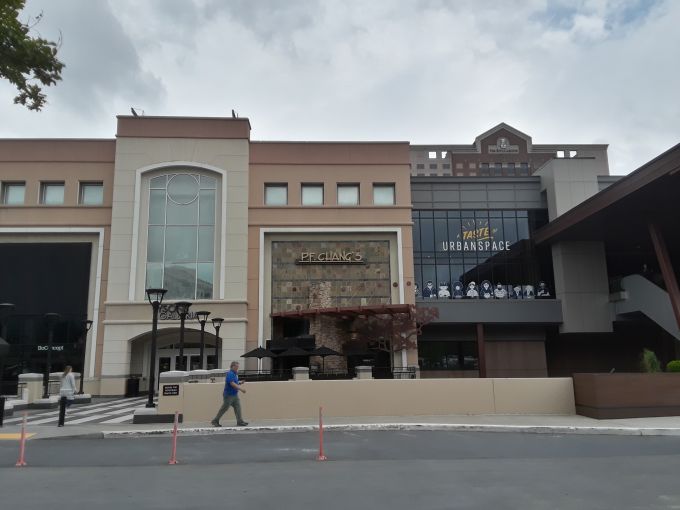 Some retail and restaurant frontage at the Tysons Galleria mall in McLean, Va. Photo: Wikicommons

Brookfield Property REIT, an entity under Brookfield Property Partners, has locked in $425 million in debt co-originated by Morgan Stanley, Barclays and Wells Fargo to refinance a portion of the massive Tysons Galleria mall in McLean, Va., according to ratings agency analysis of the transaction.

The five-year, full-term, interest-only, commercial mortgage-backed securities (CMBS) financing retired about $276.4 million in existing CMBS debt and covered about $24.5 million in upfront reserves, as well as the costs of closing the deal, according to analysis from S&P Global Ratings, which rated the single-borrower deal. The sponsor was able to recoup more than $119 million in equity as part of the deal as well, with about $39.3 million of that total being set aside for gap rent guarantees and outstanding tenant obligations for a handful of new tenants that are still building out their spaces in a new, redeveloped section of the mall.

S&P wrote that Brookfield Property REIT reported a cost basis of about $500 million, meaning that it still had about $75 million in equity in the more than 740,000-square-foot property at the time this loan closed.

The loan is collateralized by Brookfield REIT’s fee simple and leasehold interests in a 488,244-square-foot portion of Tysons Galleria, a three-story, enclosed mall that’s located about 15 miles west of Washington, D.C., in McLean, Va.

The mall was built in 1988 and is currently anchored by Neiman Marcus and Saks Fifth Avenue. Both retailers own the space they occupy, which does not act as collateral for this CMBS loan.

There is a third anchor space that had previously been owned and occupied by Macy’s. Brookfield acquired the 260,000-square-foot anchor box from Macy’s five years ago. In 2019, it moved forward with a $120.3 million repositioning to transform it into a multi-tenant space that is now geared toward entertainment uses, as well as for restaurants and smaller retailers, according information from S&P.

Redevelopment work on the former Macy’s space is still ongoing, but it is expected to be fully completed next year, according to data from S&P and DBRS Morningstar. There is still about $24.5 million worth of obligations for remaining tenant improvements and, as of late August, there was about $24.7 million worth of construction work that hasn’t yet finished. Once complete, it will span almost 195,000 square feet.

Brookfield has secured eight new tenants in the space that will occupy more than 192,000 square feet. As of the start of this month, seven were still building out their spaces, with plans to open by the end of this year or in the first quarter of 2022, while furniture store Arhaus was the only tenant that was open, occupying about 3.1 percent of total net rentable area.

The collateral for this financing was nearly 93 percent leased out at the start of this month, per DBRS Morningstar analysis; the entire property, including the Neiman Marcus and Saks Fifth Avenue spaces, was about 95 percent leased out. Overall, the regional mall includes 11 major tenants and 69 smaller, in-line tenants, all of whom were open and operating at the start of this month, according to S&P data.

In the last 15 years, the mall has held onto occupancy levels over 90 percent, per S&P.

It is also connected to The Ritz-Carlton, Tysons Corner hotel, which is not a part of this financing.