Both buildings are fully leased to Facebook and are located within the 36-acre, master-planned Spring District in Bellevue, Wash. 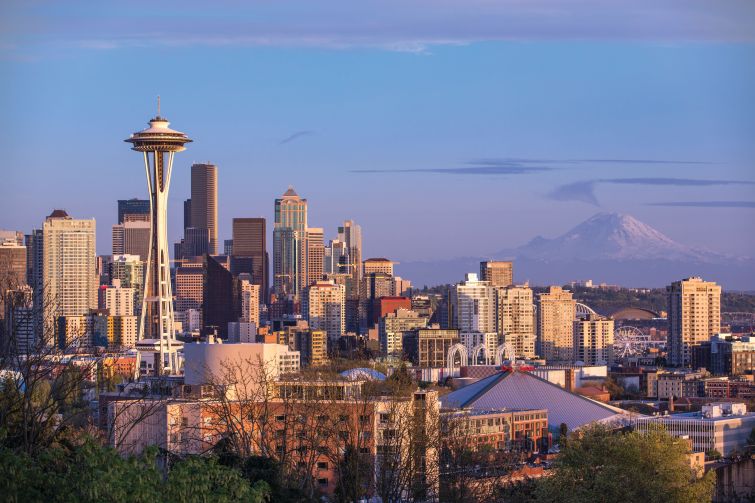 Brookfield Premier Real Estate Partners (BPREP) has lined up $205 million in debt to recapitalize its positions in Block 16 and Block 24 — two brand-new, Facebook-leased office buildings in Bellevue, Wash., that it acquired over the last nine months, according to ratings agency analysis of the deal.

Goldman Sachs and DBR Investments Co. Ltd. — a Deutsche Bank affiliate — are originating the two-year, floating-rate and interest-only, commercial mortgage-backed securities (CMBS) loan, with the former taking down 80 percent of the loan amount, according to data from Kroll Bond Rating Agency (KBRA).

The deal is set to close on Aug. 19. The first lien mortgage includes three one-year extension options and will feature an interest rate spread of about 1.35 percent over one-month Libor.

BPREP — a massive, multibillion-dollar, core-plus fund under the control of Brookfield Asset Management — acquired its fee simple interests in the adjacent Block 16 and Block 24 office buildings in November 2020 and May 2021, respectively, for a combined $565 million. Block 16 is completed, while Block 24 is nearly complete and ready to be occupied — although Facebook has delayed its return to the office until at least the end of January 2022.

BPREP, though, is planning to sell off its fee interests in the properties, keeping its leasehold interests in both and using that as collateral to secure this CMBS loan; the ground leases are for 99 years, running through 2120. The initial, combined ground rent is $7.25 million, with semiannual escalations tied to the consumer price index, according to data from Fitch Ratings.

This new CMBS financing will ultimately recapitalize BPREP for its purchases, allowing it to recoup about $199.7 million in equity, per KBRA. The remaining proceeds of the loan will fund $4.3 million in closing costs and cover reserves, as well as outstanding landlord obligations and free rent, according to Fitch and KBRA analysis.

Block 16 and Block 24 sit right next to each other at 1288 123rd Avenue NE and 12335 NE District Way within the 36-acre, master-planned Spring District campus in Bellevue. They comprise a combined 543,000 square feet that is mostly fully occupied by Facebook, which has signed on for the space at a triple-net basis through 2033; there is also a nearly 1,200-square-foot vacant retail box on the first floor. Facebook’s leases at the two properties include a total of 12 years’ worth of renewal options, per KBRA.

The social networking giant has deployed more than $59 million for Block 16’s buildout, beyond just the $95 per square foot landlord tenant-improvement (TI) package that’s in place, per KBRA. It’s unclear what the contributions towards Block 24’s buildout will amount to, since the work is still ongoing, but KBRA anticipates it will be similar to that of Block 16.

The two mid-rise structures were constructed by a joint venture between Shorenstein and Wright Runstad & Co. The pair are in the middle of a large-scale redevelopment campaign that would see the Spring District transformed into an urban, walkable mixed-use neighborhood complete with more than 4 million square feet of hotel, office, retail and residential space.

Block 16 and Block 24 are situated on a 2.9-acre site about 11 miles east of Downtown Seattle. They feature a range of amenities, including two sizable cafeterias, rooftop decks, a bike repair area and storage, lockers and showers, and also a subterranean parking garage with 1,178 spaces.

Office development in and around Seattle, specifically Bellevue — a coveted tech hub — has been hot for some time, according to appraisal information from KBRA. About 3.3 million square feet of office space has entered the east side market since 2015, including Block 16 and Block 24, and there is another 3.5 million square feet of space set to come online throughout the area in the next two or three years.