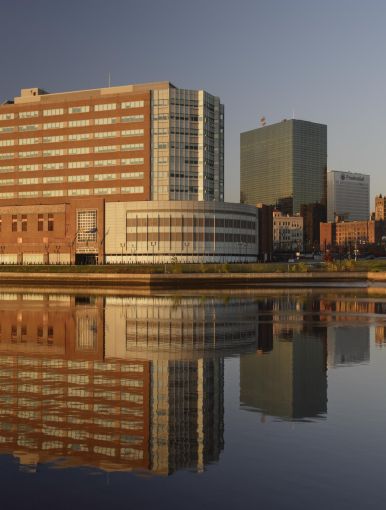 The credit-tenant lease financing has a 21.5-year term, maturing in line with a recently renewed, 20-year lease signed by the U.S. General Services Administration (GSA). The loan will pay interest at a sub-3 percent rate and includes six years of interest-only payments, sources said.

The property — officially called Claremont Tower — is located at 11 Centre Place, adjacent to Newark’s central business district, and is situated on the banks of the Passaic River.

The FBI occupies the entire asset, which spans about 500,000 square feet across a secured, attached, five-story parking garage with 400 parking spots and 11 floors of office space, according to Claremont’s website and a February 2020 lease prospectus from the GSA.

In February 2020, the GSA proposed a renewal of the FBI’s lease for 248,000 square feet at the property. The previous lease was set to expire in November 2022, according to the GSA’s lease prospectus.

Claremont built the property for the FBI in 2002, which added to its long list of field offices in major metropolitan areas across the U.S. As of last year, the FBI has 56 field offices across the country, according to information from the GSA.

The GSA detailed in its lease prospectus in February 2020, as it was exploring the FBI’s housing needs in the area, that a long-term renewal for the agency at the property was sensible, due to the fact that the “unique nature of operations requires levels of security not easily acquired on the open market.”

The stable profile of the property, with its long-term lease to the federal government, brought forth a roster of interested lenders in what W&D called a “highly-competitive marketing process.” Life companies, investment banks and other credit-tenant lease finance firms, besides CTL, jumped in to bid on the financing.