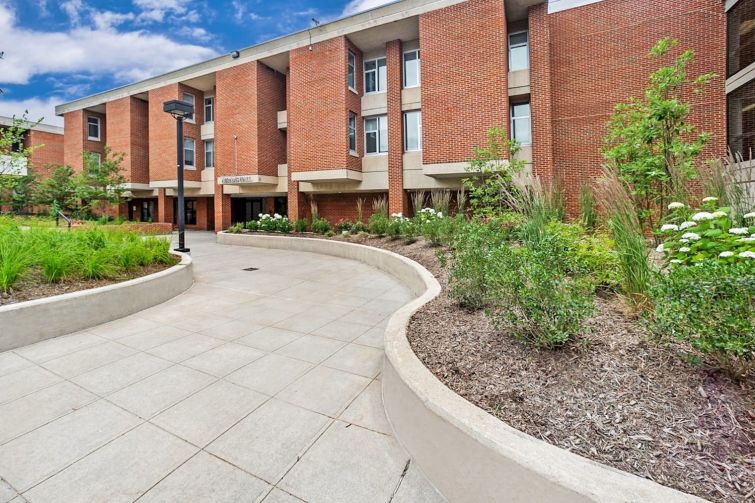 The Abrams Hall building on the Walter Reed campus. Photo: By Urban Atlantic

A joint venture between Urban Atlantic, Housing Up, and Triden Development Group received $20 million in financing to develop a 54-unit affordable assisted living apartment project at the Parks at Walter Reed, a 66-acre redevelopment of the former Walter Reed Army Medical Center in Washington, D.C.

The financing will be provided by a Housing Production Trust Fund loan by the District’s Department of Housing and Community Development, low-income housing tax credit equity from R4 Capital, and a construction loan from Cedar Rapids Bank & Trust.

The property will feature 54 furnished apartments to seniors aged 62 and older, whose incomes are below 30 percent of the Area Median Income. Furthermore, assisted living services will be provided for tenants through Medicaid’s EPD Waiver program.

“The need for affordable seniors’ assisted living in Washington is significant, as it is nearly non-existent in Washington, D.C.,” Caroline Kenney, Urban Atlantic’s managing director of public-private ventures, told Commercial Observer. “To our knowledge, only one small facility exists today, with one other under construction.”

Priority for the assisted living units to be created within Abrams Hall will be given to applicants being served through the District’s Coordinated Assessment and Housing Placement program for households experiencing or at risk of experiencing homelessness.

“Bringing 54 furnished, assisted living apartments to low-income seniors is an investment in supporting the most important members of our community — our seniors,” John Falcicchio, D.C.’s deputy mayor for planning and economic development, said in prepared remarks. “Today represents the latest step in our effort to build a diverse and vibrant community along Georgia Avenue, and brings us closer to achieving 36,000 new housing units by 2025, including 12,000 affordable units spread across all eight wards.”

The assisted living project is one part of the redevelopment of Abrams Hall, the former barracks on the Walter Reed Army Medical Center Campus. Last year, Urban Atlantic and Triden teamed with Hines and Bridge Investment Group on The Hartley, a 323-unit, luxury, mixed-use development in the Parks at Walter Reed. Other sections of Abrams Hall have been redeveloped into 77 units to house homeless veterans and 80 units for seniors.

“The Parks prioritizes inclusivity at every level, including across age, income, background and racial identification,” Kenney said. “The over 2,200 new housing units to be developed within the community include both for-sale and rental housing, apartments, condominiums and townhomes, and will serve seniors, families and individuals at 0 percent, 30 percent, 50 percent and 80 percent AMI, as well as market rate. Additionally, 20 percent of all units will be affordable.”