The ubiquitous green-hued grocer is padding its lead against rivals Aldi, Winn-Dixie and Whole Foods 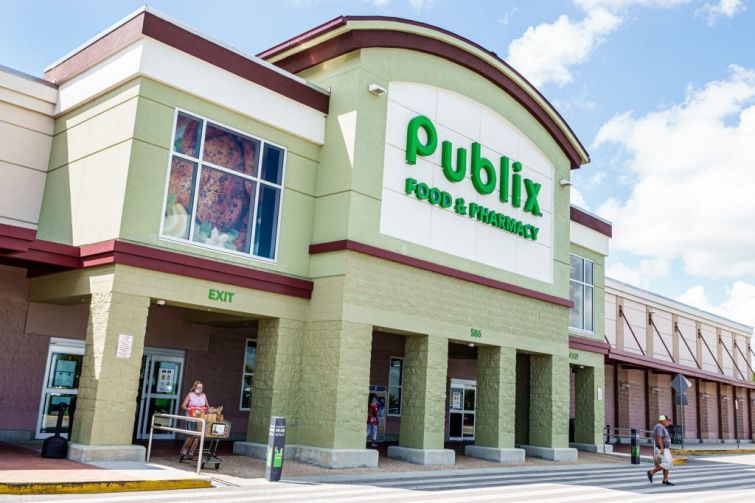 To understand just how aggressively Publix Super Markets is blanketing South Florida with stores, look no farther than the corner of Commercial Boulevard and Dixie Highway in Oakland Park.

At the northwest quadrant is a Publix that has operated for years. And just across Commercial Boulevard is another Publix. The newer location at the corner opened in 2018 and replaced a former Safeway.

Three years later, both stores continue to operate across the street from one another, defying the conventional wisdom that, in an age of wilting retailers, one store on a busy corner is plenty.

The nearby stores offer just another illustration that Publix, long the dominant grocer in South Florida, is padding its lead. The Lakeland-based chain operates 242 locations in Miami-Dade, Broward and Palm Beach counties, and no rival is close.

The next-biggest brand is Aldi, with 44 stores throughout the region, according to data compiled by Joshua Ladle, co-founder and president of Rockval, a commercial real estate marketing and research firm.

Publix has amassed more South Florida stores than its next seven largest competitors combined — and despite that massive lead, the grocer continues to scout for additional locations.

“They’re still looking to expand and grow their network of stores here in South Florida,” Ladle says. “As hard as it is to believe, there are still places where they see a hole in their network and would like to have another store.”

In the short run, the overlapping locations relieve the crowded checkout lines and packed parking lots at busy stores nearby.

“Sales can be so high in a Publix store, they need another nearby store to take the pressure off,” said David Livingston, an independent analyst who studies the industry.

In the longer run, the sheer density of stores signals to out-of-state rivals — namely Walmart, Kroger and Amazon — that South Florida’s supermarket scene is full. And for consumers considering ordering groceries online, why buy from Amazon when they’ll pass numerous Publix stores on their commute?

“Let’s say Amazon tries to replicate what Publix has,” Ladle says. “How would you even do that?”

Amazon’s Whole Foods operates 17 stores in South Florida, and the e-commerce giant delivers groceries in the region. For now, though, Publix is South Florida’s grocer of choice.

The cross-street stores in Oakland Park are just one example of Publix’s strategy. In Miami Beach, Publix operates stores within a few blocks of one another on Sixth Street and on West Avenue.

“You might think Publix is expanding rapidly but, in reality, it’s slow and methodical,” he said. “Florida is gaining population, while competitors have left. Publix benefits double.”

Albertsons and Lucky’s Market are two chains that made a splash in Florida over the years, only to retreat from the state. Walmart had been on a building spree with its Walmart Neighborhood Market concept, but while it operates two dozen such stores in South Florida, Walmart has hit pause on its grocery expansion plans.

Then, there’s Winn-Dixie, once a serious rival to Publix. In 1997, Publix and Winn-Dixie were evenly matched. Publix operated 446 stores in Florida, while Winn-Dixie had 424, according to their regulatory filings at the time.

The two rivals have followed different trajectories since then. Winn-Dixie has been in and out of bankruptcy, while Publix remained a model of financial stability. Winn-Dixie never shook its reputation for poor customer service; the chain routinely ranks near the bottom of the Consumer Reports ranking of customer satisfaction. Publix is consistently high on the list — it ranked 7th among 96 chains in the most recent standings.

Meanwhile, Publix’s investment in brick-and-mortar has done nothing to harm the chain’s financial results — the employee-owned company is more profitable than ever. According to a regulatory filing, Publix’s profit margin in 2020 was 8.9 percent — its best ever, and a huge number in the notoriously low-margin grocery industry.

A beneficiary of new shopping trends during the coronavirus pandemic, Publix’s sales soared 18 percent from 2019 to 2020, climbing to $45 billion last year.

Publix doesn’t discuss its real estate strategy publicly, and the grocer declined to comment for this story.

However, its financial filings tell a tale of a company that is not only expanding, but also changing its approach to real estate. In 2006, Publix owned the real estate under less than 11 percent of its locations. By 2020, Publix was its own landlord at nearly 35 percent of its stores.

Devoting cash to real estate ties up assets, but it frees Publix from paying rent. Acting as landlord also allows Publix to further tighten its grip on the grocery market.

“They save a tremendous amount of money in rent by owning,” Ladle said. “They can really control the tenants in the shopping center.”

For instance, Publix could nix leases with sub shops that compete with its deli counter, or reject liquor stores that might poach Publix’s alcohol sales. In the unlikely event that Publix decides to move out of a location altogether, a third-party landlord could rent that space to Whole Foods or Walmart Neighborhood Market, Livingston said.

“Owning a building, Publix has more control over its own destiny,” Livingston said. “Don’t be surprised to see a vacant Publix be used as a depot for online shopping.”

Even as Publix expands its already-daunting network, the grocer faces plenty of niche competition. For example, Latin supermarkets Sedano’s, Presidente and Bravo have built robust networks in South Florida.

Meanwhile, Trader Joe’s and discount grocer Aldi have been on expansion sprees of their own. However, both of those rivals have positioned themselves to pick away at Publix, rather than face the giant head-on. Trader Joe’s and Aldi operate smaller stores with limited inventories. Their footprints lack the deli counters, sushi stations, pharmacies and liquor stores that have helped drive Publix’s growth.

With its market-leading position in Florida secure, Publix has been adding locations in Georgia, Alabama, South Carolina, North Carolina, Tennessee and Virginia. The expansion means Publix is competing head to head with Kroger in Sun Belt markets, even as Publix wards off the nation’s largest grocer in its home state. Kroger operates stores in 35 states, but Florida isn’t one of them.