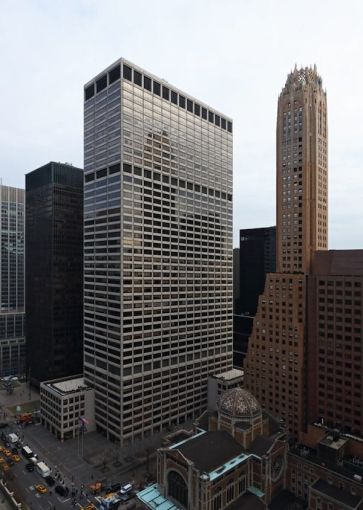 BROADER BROADBAND: Rudin Management’s 345 Park Avenue in Midtown Manhattan is one of the nation’s first commercial properties to utilize a CBRS system. The landlord says that it has effectively doubled the office building’s wireless capacity. Getty Images.

CBRS is a wireless frequency band, fully authorized for commercial use in 2020, that building owners can now utilize to set up faster, more secure, private high-speed wireless connections. It’s effectively a shortcut to upgrade an entire office building or workspace to 5G speeds.

“This is the first time in the history of the Federal Communications Commission (FCC) that they’ve done something for the real estate industry, and it’s pretty amazing,” said John J. Gilbert III, Rudin’s chief operating officer and executive vice president. “They did it with a purpose, to accelerate in-building 5G and private networks.”

The project at 345 Park won’t be the last. Rudin will add new systems as part of the firm’s ongoing renovations of properties at 80 Pine Street and 3 Times Square, said Gilbert, and “keep going” with additional rollouts through its portfolio.

Experts, such as Oren Binder of the OnGo Alliance, an industry trade group, said CBRS is both faster and more secure, and will become a huge selling point for high-value tenants in financial, education, tech, next-generation manufacturing, and film and video game production.

Last year, Virginia Tech set up its own private CBRS networks at its main campus in Montgomery, Va. Dr. Juanyu Bu, vice president of mobility strategy at telecommunications firm CTS, believes the technology can support a new generation of smart parking solutions. At a Connected Virtual Tech Event last November, Yunis Shahdad, an executive director of Ericsson, claimed that installing such systems could increase the value of commercial properties up to 20 percent due to having a private, indoor network.

The commercial deployment of such technology, which began after getting FCC approval in January 2020, hasn’t been a bigger story in commercial real estate circles because office spaces have been largely empty since COVID, and early trials were put on hold.

“People thought offices would be the most popular environment for this, but there haven’t been people in offices,” said Jim Jacobellis, vice president of Geoverse, a communications firm that sets up CBRS networks. “The general consensus is that once COVID ends and people get back in buildings, the growth engine will be offices.”

CBRS emerged as a potential commercial option in 2015, after the government identified chunks of unused broadband spectrum. The FCC then decided to create a mechanism that allowed military ships and satellites to have priority over the band, via a system called the Spectrum Access System. This still allowed others private access to the rest of the spectrum, letting them create their own high-speed LTE networks at 5G speed (it’s also been nicknamed the “innovation band.”)

Larger clients were able to buy a Priority Access License, or PAL, useful for setting up a campus or large manufacturing plant, but landlords and building owners can set up their own private networks on unlicensed parts of the spectrum. The technology has begun to take off in factories: select GM, John Deere, and Honeywell facilities already utilize CBRS for its security and broadband capabilities.

“This is different from Wi-Fi; you can do so much more,” Jacobellis said. “It’s also much more secure. Building-critical information should go over CBRS, not Wi-Fi. This will be the foundation that allows tenants and visitor smartphones to work on the same network.”

Both the American Dream entertainment complex in East Rutherford, N.J., as well as Dallas Love Field Airport, have deployed CBRS systems to improve communications efficiency. Even more appealing to building owners, CBRS can be split up within a structure to create private networks for different tenants. And, using CBRS for those building-critical purposes frees up more space on existing Wi-Fi networks, improving the performance of existing internet infrastructure.

“The beauty is that the spectrum can be segmented,” Rudin’s Gilbert said. “It goes on and on with potential use cases.”

CBRS can also form the backbone for smart building applications. It’s ideal for transmitting high-definition video, meaning that it can be used to set up new wireless security camera systems. Its improved security and privacy features make it a good option for connecting smart building devices, digital signage, and sensor arrays.

ESG (environmental, social, and corporate governance) monitoring — such as tracking emissions, air quality, and other sustainability features of a building — will also be a big future application, added Jacobellis. The CBRS system at 345 Park, for example, will integrate with Nantum, a Rudin-developed smart building system, and allow tenants to track occupancy data, indoor air quality, lobby occupancy, and elevator wait times.

CBRS isn’t perfect. While it costs slightly less to install than traditional Wi-Fi systems — setting up such a system means installing a fiber trunk and a new system of sensors — annual operating costs are roughly double, per an analysis by consultancy and research firm Mobile Experts. Factor in installation and operation for five years for a 250,000-square-foot building, and CBRS costs between $0.63 and $0.78 per square foot, versus $0.53 for Wi-Fi. And not every single device works with CBRS — the new generation of iPhones and other smartphones work, as do certain laptops from HP and Dell.

“You provide better service to your tenants and you enhance the security of wireless networks,” Gilbert said. “I think it’s a game-changer.”