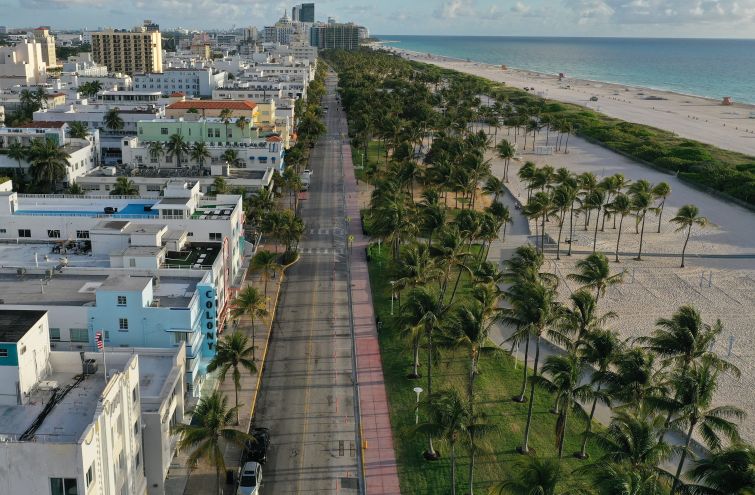 An aerial view of a desolate Ocean Drive in Miami Beach on March 24, 2020 after hotels were closed at the start of the COVID-19 pandemic. Lodging real estate investment trusts trimmed their losses in the fourth quarter to less than half of what they incurred in the second quarter when government shutdowns were in effect. Photo: Joe Raedle/Getty Images)

Real estate investment trusts (REITs) are showing signs of recovery, one year after experiencing sharp declines during the beginning of the COVID-19 pandemic.

Funds from operations (FFO) at REITs rose 11.3 percent in the fourth quarter of 2020, compared to the third quarter, and recovered nearly half of the dips experienced last spring, according to the Nareit Total REIT Industry Tracker Series report released Wednesday. The analysis noted that while FFO remains well below pre-pandemic levels, at 16 percent lower than the 2019 fourth quarter, this metric was improved in eight of the 12 REIT property sectors.

“Even before the vaccine rollout was fully underway, the REIT industry’s collective FFO had already recovered half its decline in the first half of last year,” Calvin Schnure, Nareit senior economist, said in a statement. “With broad distribution of COVID-19 vaccines on the horizon, REITs are poised for further gains in 2021.”

Net operating income for equity REITs totaled $22.8 billion at the close of the fourth quarter, 3.2 percent higher than the prior quarter, and 8.1 percent below late 2019.

The REIT asset classes that shined the most in later stages of 2021 with FFO included office, residential, diversified, health care, self-storage, timber and specialty, according to Nareit. These property types collectively recovered half of the decline they experienced in the first two quarters of 2020. As a group, their FFO was 9.6 percent lower in the fourth quarter than pre-pandemic levels, a substantial improvement from June when it was 19.6 percent below.

Data center REITs also displayed strong performance throughout the pandemic, finishing December with a 16.9 percent rise in FFO compared to the fourth quarter of 2019. FFO of infrastructure REITs and industrial REITs increased by 15.8 percent and 8.8 percent, respectively, over the same period.

The sectors most directly impacted by the pandemic, retail and lodging/resorts, trimmed their losses in the fourth quarter to less than half of what they incurred in the second quarter, when government shutdowns were in effect.  Retail REITs reported a 23.6 percent decline in FFO compared to the year-earlier period. Lodging/resorts went from positive FFO before the pandemic to negative FFO for the final three quarters of 2020.

“We believe we will see a strong recovery in those sectors that have felt the brunt of the pandemic when the vaccine distribution is widespread and shopping and travel patterns recover more fully,” Steven A. Wechsler, Nareit president and CEO, said in a statement. “These companies, along with the rest of the industry, also have the financial strength — including lower leverage, long debt maturities, and significant resources of cash, securities and access to credit — to sustain operations until their respective segments of the economy reopen further and more customers return.”

Fourth-quarter occupancy rates across all property types were 91.2 percent, up 80 basis points (bps) from the prior quarter. Occupancy rates dropped 90 bps in the office sector, but rose in retail, multifamily and industrial.