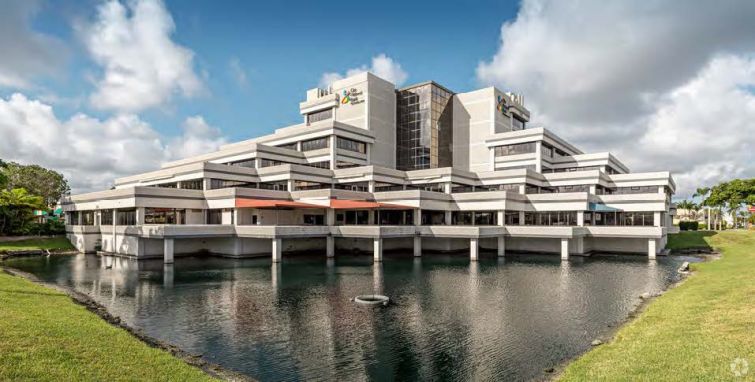 An investment entity including owner and developer TJAC Development has secured $99 million in commercial mortgage-backed securities (CMBS) debt from Citigroup and Bank of America to help recapitalize a portfolio of four mixed-use office properties in Boca Raton, Fla., Commercial Observer has learned. There was an unnamed, foreign equity provider also included in the financing.

TJAC operated under an entity called Titan General Partners, of which it is an investor, sources said. Dan Kaskel of law firm Sachs Sax Caplan represented Titan in the deal.

Meridian Capital Group’s Israel Schubert, Noam Kaminetzky and Scott Forbes arranged the financing on behalf of the borrowing party for the properties, one of which houses the massive firm’s Boca Raton regional office at a building at 7700 West Camino Real.

“Despite the multiple challenges that we faced over the loan negotiation and closing process, including the inherent complexity associated with a significantly sized CMBS deal with multiple participants, foreign equity investors, and treasuries spiking prior to closing, [we] helped to successfully bring this loan across the finish line,” Kaminetzky said in a statement. Meridian had a history with TJAC, having been involved in facilitating previous financing for some of the assets in the portfolio.

This recapitalization started prior to the onset of the pandemic in the late winter 2020, before “the financial markets came to a screeching halt,” Kaminetzky said, adding that his team created a structure for the parties involved to allow “the joint venture to proceed while mitigating COVID risks to the lending group. This was a team effort of epic proportion and took a herculean effort from all parties involved.”

TJAC, an affiliate of housing developer The Triad Group, compiled the properties through a series of acquisitions from 2012 from 2016, and has transformed them via the construction of supplemental buildings, interior and exterior renovations of existing buildings on each site, including roofing, landscaping, signage, electrical and plumbing upgrades and the resurfacing of parking lots.

Fountains Center is a roughly 15-acre site at 7000-7700 West Camino Real that houses seven mixed-use office buildings with upwards of 185,000 rentable square feet that were constructed between 1978 and 1988, according to TJAC’s website. TJAC bought the office park for $16 million in February 2012, when occupancy was at around 47 percent, and by September, following a round of capital expenditure work, it had been improved to 80 percent, per a report by Boca News Now that was posted on TJAC’s website.

The Boardwalk at 18th Street is a seven-building waterfront mixed-use development at 6909 Southwest 18th Street that includes about 108,000 rentable square feet for office, retail or restaurant uses according to TJAC’s website. It sits on and overlooks a 21-acre lake connected to a canal inlet.

City National Bank Plaza — at 7000 West Palmetto Park Road — was built in 1986 and sports three buildings situated on more than 7 acres. It includes a roughly 132,600-square-foot office complex, a 10,010-square-foot retail property that’s home to a Starbucks and a 4,120-square-foot McDonald’s outpost. TJAC bought the property for $37.6 million in August 2016, helped by a $31.5 million loan from Bank Leumi, according to a report from South Florida Business Journal.

In the spring 2019, TJAC reportedly filed plans to build a fourth building on the property, which would stand at four stories, and feature about 30,000 square feet of retail at street level and a 381-space parking lot on the upper level, per a report from SFBJ.

Built in 1983, Grove Centre at 21301 Powerline Road is a 53,000-square-foot, four-story office building that sits on 3.5 acres, with 261 parking spaces, according to online property and listing information on CommercialCafe. TJAC purchased the property for $11.5 million in early 2016 from Miami-based SF Partners.