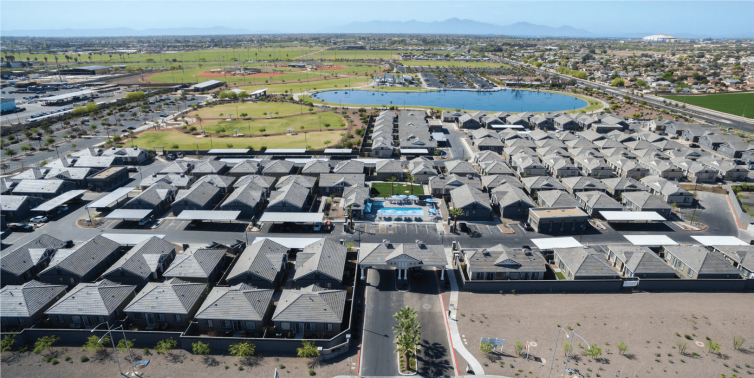 Scottsdale, Ariz.-based developer and investor Cavan Companies has nabbed $28 million in construction debt from ACRES Capital to fund its build-out of another one of its “bungalows” rental complex projects in Arizona’s Maricopa County, Commercial Observer has learned.

Long Island, N.Y.-based, middle-market lender ACRES originated the loan for Cavan to construct and subsequently stabilize Bungalows on Bowlin — a 196-unit rental community sporting an array of single-story, detached, single-family residences and multifamily duplexes — in one of the fastest growing metro areas in the country, as per information from ACRES.

Cushman & Wakefield’s Jeremy Korer arranged the debt, according to ACRES.

The project will be located on a 16-acre site at the Northwest corner of Bowlin Road and John Wayne Parkway in Maricopa, just south of Phoenix. It’s situated next to major interstate thruways in I-8 and I-10 and near local secondary schools Maricopa Elementary School, Maricopa Wells Middle School and Maricopa High School, which are all within walking distance of the site.

Once complete, the site will include a clubhouse building, a pool and spa, central park space, a dog park, ramadas with seating, and shaded walking paths, among other offerings. It will also have 426 covered and uncovered parking spaces and 60 garages, some of which will be included with residences while others will be available for rent. The developer received approvals for the project from the county in the spring.

ACRES CEO and President Mark Fogel said in a statement that the Phoenix market “is an ideal area for new multifamily development due to a sustained influx of new residents. [Its] population growth is projected to continue in the coming years, as new residents arrive from states with higher taxes and costs of living to take advantage of Arizona’s quality-of-life benefits and lower prices.”

As such, Fogel said the planned asset is “poised to benefit from the sponsor’s deep local knowledge and experience with these types of rental communities.”

Indeed, Maricopa County has seen waves of new residents in the last few years. In early 2019, it ranked for the third year in a row as the fastest growing county in the United States, as per population data and research from the U.S. Census Bureau.

And through July 2019, the Phoenix metropolitan area ranked as the 10th most populous in the U.S., just edging out the Boston metro area, which attracts businesses, such as insurance giant State Farm, the United Services Automobile Association (USAA), and financial services firms Charles Schwab, Freedom Financial Network and Northern Trust.

This plays into Cavan’s strategy targeting renewed demand that’s cropped up for single-family-type rental housing, to which the firm’s “bungalow” approach caters, while also facilitating the feel of a multifamily-style community. Cavan currently has three open and active bungalow properties in Arizona, with another five or six on the way, as per its website.