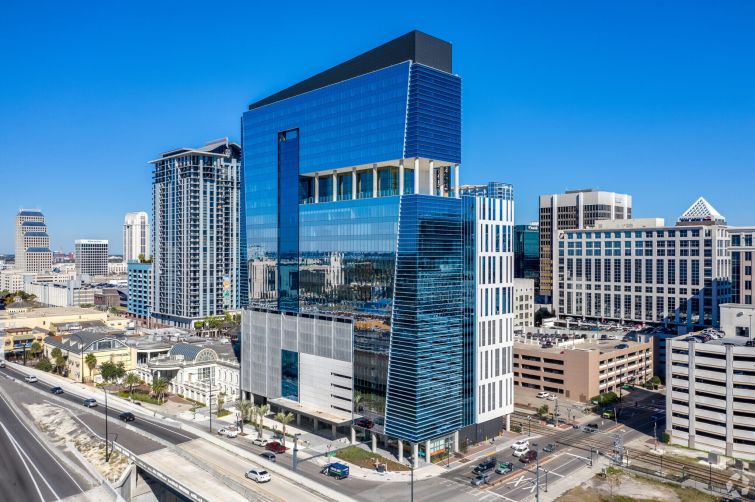 CIM Group has provided $72.9 million in debt to a joint venture between Mason Capital Partners and Lincoln Property Company to retire previous construction debt used to build SunTrust Plaza at Church Street Station, a newly opened Class A office building in downtown Orlando, Fla., according to information from Berkadia, which sourced and arranged the debt financing.

The five-year loan retired debt on the fresh 28-story, 209,000-square-foot office asset (which also includes a Marriott-branded hotel at its peak) that’s currently 84 percent leased, as per information from Berkadia. It is the largest office loan on a single property in Orlando this year and the third largest in Florida, according to Berkadia, citing information from Real Capital Analytics.

This financing did not include the Marriott AC Hotel at the top, which has yet to open but will offer 180 rooms once it does. It is scheduled to open later this year, per Berkadia.

Berkadia’s Michael Weinberg, Rebecca Van Reken and Alec Fox arranged the debt out of the firm’s Orlando office on behalf of the joint venture owners.

“SunTrust Plaza at Church Street is the preeminent asset in downtown Orlando and possesses an unmatched combination of quality, amenities and proximity to all of what the Orlando [central business district] has to offer,” Weinberg said in a statement. “The property maintains a superior rent roll and is truly the highest-quality mixed-use asset in the market.”

The $133 million tower’s office space opened in early January, according to a previous report from the Orlando Business Journal, and the asset is the first office to be delivered in the city’s downtown in almost a decade, according to Berkadia. Lincoln and Mason co-developed the asset with a firm called Pope & Land Real Estate, as per Pope & Land’s website.

Matching the property’s namesake, its anchor tenant — holding down 43 percent of its rentable office space through 2030 — is Truist Financial Corporation, a bank holding company that formed after SunTrust Bank and BB&T Bank merged in December last year. The building welcomed Truist as well as Orlando-based HuntonBrady Architects — the architect of the building — as its first two tenants in early January. As of today, the asset has just the 12th floor of the office portion — just over 29,000 square feet — and one roughly 3,000-square-foot retail box available for lease, according to Berkadia and property specs listed on a Lincoln brochure of the building.

Officials at Lincoln Property could not immediately be reached. An official at CIM Group was not able to comment prior to publication.