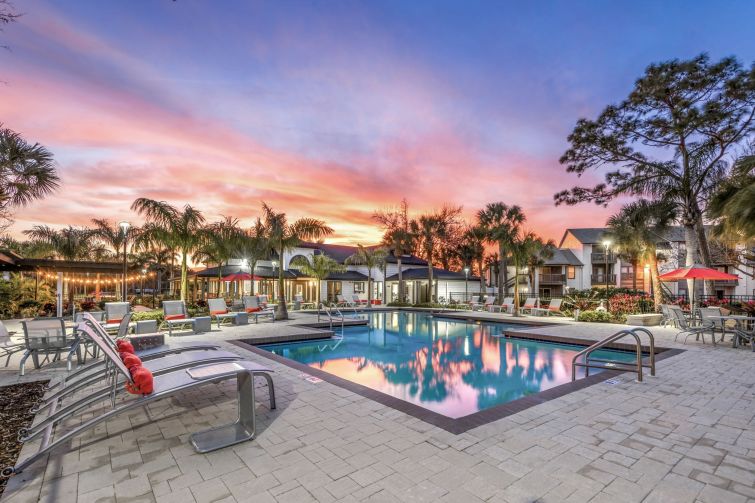 American Landmark Apartments, one of the country’s most prominent owners and operators of multifamily housing, has nabbed just under $34 million in Freddie Mac-backed debt from KeyBank Real Estate Finance to fund its purchase of The Vinings at Palm Bay in Palm Bay, Fla., Commercial Observer has learned.

The 320-unit asset will be renamed The Braxton and is located at 1000 Palm Place Drive Northeast in Palm Bay, Fla. The firm plans on injecting around $3 million for capital improvements. The acquisition adds yet another property to American Landmark’s Florida portfolio, which comprises more than 33,000 rental units, as per information from the firm.

The property’s location puts it within the popular “Space Coast” section of Florida, along the Atlantic coast, which hosts a range of aviation and tech companies such as Elon Musk’s aerospace company SpaceX; it’s also within an hour of government outposts like Patrick Air Force Base as well as the town of Cape Canaveral, which is home to the Kennedy Space Center on the nearby Merritt Island, the Air Force Space and Missile Museum and the Sands Space History Center. Cape Canaveral is also the location of the Cape Canaveral Air Force Station, which is now an installation of the U.S. Space Force‘s 45th Space Wing.

“Palm Bay and the surrounding cities of Melbourne, Titusville and Cape Canaveral are   enjoying significant job and population growth due to the area’s strong high-tech, defense and aerospace sectors, so now is an excellent time to be investing in quality rental housing in this region which will remain an important contributor to the U.S. economy for years to come,” American Landmark CIO Christine DeFilippis said in a statement.

The property was built 1987 and comprises one-, two- and three-bedroom residences that range from 595 to just under 1,400 square feet, with private patios or balconies, and in-unit washers and dryers, according to American Landmark. The complex has two swimming pools, a hot tub and sundeck, outdoor grilling areas and a playground, a “car care center,” bicycle storage, a fitness center, a tennis court and an on-site community lake, as per the property’s website.

As part of American Landmark’s planned renovation and value-add campaign, it will add granite countertops, new cabinets and stainless steel appliances, new plumbing and lighting fixtures, USB outlets and electronic locks, according to the firm. The company will also introduce a new dog park to the site and will renovate the fitness center and the clubhouse building as well as the swimming pools and the complex’s landscaping.

Monthly rents range from around $950 for one-bedrooms to about $1,400 for the three-bedroom units, according to the property’s website.