The planned 354,000-square-foot development would meld with Union Theological Seminary, which is affiliated with Columbia University 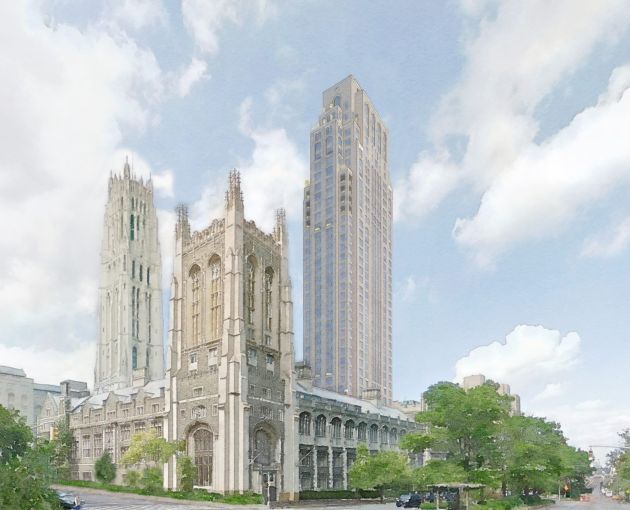 A joint venture between multinational real estate investor and developer Lendlease and developer L+M Development Partners have nabbed $250 million in construction financing from Barings to finance their planned mixed-use project at the site of the Union Theological Seminary in Manhattan’s Morningside Heights neighborhood, according to an announcement today from the joint venture.

Lendlease and L+M’s fresh construction debt proceeds will help facilitate the pair’s planned 354,000-square-foot mixed-use academic and residential project at 100 Claremont Avenue, feeding off Columbia University’s massive campus in the area. The joint venture is aiming at completing the development by the spring of 2023.

JLL’s Christopher Peck and Scott Aiese sourced and arranged the construction financing on behalf of the borrowers.

The development will essentially meld with the seminary, a non-denominational Christian seminary associated with Columbia University that has served its theology faculty since 1928. The project will feature 54,000 square feet of space for classrooms and offices for academic and administrative uses as well as apartments for faculty. In addition to that, a 42-story tower comprising 165 market-rate, one-, two-, three- and four-bedroom condominium residences is planned for the site, according to information from the joint venture. Lendlease first filed plans for the project in Dec. 2018 and demolition began last October.

“The commitment and fortitude of our financial, academic and neighborhood partnerships have enabled us to move forward with the financing and construction of this unique project, despite the many uncertainties stemming from COVID-19,” Lendlease executive general manager Melissa Román Burch said in prepared remarks. She added that the loan gives them a financial partner dedicated to the plan of delivering “much needed classrooms and housing for both the academic community and the broader Morningside Heights neighborhood, while also continuing our investment in the local community.”

Barings managing director and head of construction lending, Justin Preftakes, said his firm is eager to see out the “exciting project” — designed by Robert A.M. Stern Architects — given that it’s being led by two renown developers.

In 2018, Lendlease and L+M bought air rights from the seminary, which will eventually take up the office, classroom and faculty housing space, according to a 2018 report from The Real Deal. The new development is an extension of previous renovation efforts by the seminary, which had been trying to raise money at that time to do so, engaging in a $46.5 million sale-leaseback transaction of one of its dorms at 97-101 Claremont Avenue in Oct. 2018 in a move to capture some liquidity. Over the past year, Union, itself, has been engaged in a “phased work to comply with the City of New York’s Local Law 11 that calls for the restoration and safety of the historic campus building facades,” according to its website.

As part of their development efforts, Lendlease and L+M have also set aside $5 million to invest in the surrounding Morningside Heights area. The partnership is planning to provide $1.1 million over the next five years to support local community groups. The money will go towards a new fund called the Morningside Heights Community Fund — a partnership between the Morningside Height Community Coalition and the New York Community Trust to “identify and award grants to initiatives that make positive impacts” on the neighborhood, according to its website. The remaining $3.9 million will be doled out once the project is completed, and will “enable social justice programming to develop the next generation of community leaders,” according to information from the borrowers.