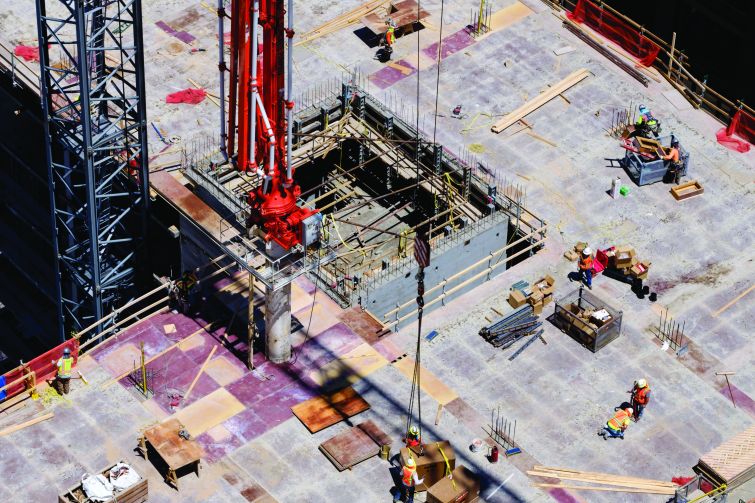 As construction sites shutdown across the city because of coronavirus restrictions, it's clear that non-union workers will be more heavily impacted. Photo: Getty Images

When Gov. Andrew Cuomo finally decided to suspend all “nonessential” construction last week amid the coronavirus outbreak in New York, it sent contractors and the workers they employ into a financial tailspin, putting thousands out of work and putting a multibillion-dollar dent in the development industry.

The shutdown has highlighted the divide between the union and non-union workforces, the latter of whom typically earn less money and have fewer benefits than their unionized counterparts. Non-union construction firms also employ an untold number of undocumented immigrant workers, who may struggle to access unemployment benefits, federal stimulus checks and medical care during the coronavirus pandemic.

As of February, 263,821 people were employed in the construction industry in New York City, according to a report from the New York Building Congress. Fifty-seven percent of those workers earn less than $50,000 a year, and another 28 percent earn between $50,000 and $100,000 a year. And 44 percent of construction workers — primarily those doing “blue-collar” labor on sites — do not have health insurance, NYBC found.

If workers are paid off the books, unemployment insurance, Social Security and other public benefits are not being withheld from their paychecks. Workers in these situations are usually not receiving health insurance, according to Coletti and other industry observers. Undocumented workers are significantly more likely to be in this position, and thus unable to access unemployment benefits when they find their sites shut down. Construction workers who lack work authorization or U.S. citizenship cannot be admitted into the union construction apprenticeship programs, which keeps them mired in lower-skill and lower-paying positions on the non-union side of the industry.

“I think in most cases, most of the non-union workers don’t have the benefits that union workers do,” said Richard Lambeck, a professor of construction at New York University’s Schack Institute of Real Estate. “If a union electrician is being paid $130 an hour, more than half of that amount probably goes toward benefits. A non-union electrician might be making $30 an hour, and there’s no benefits added onto that.”

And even workers who have paid into unemployment insurance may struggle to file claims and actually receive checks. The state Department of Labor has been so overwhelmed that its website repeatedly crashes and its phone lines are jammed. New Yorkers who want to file unemployment claims are told to call on specific days according to the first letter of their last name, in an effort to manage the unprecedented volume of laid-off people trying to get benefits.

“The site is so deluged that it keeps crashing, because you literally have hundreds of thousands of people at any time trying to get on the site,” Cuomo said last Tuesday. The state has even hired an additional 700 people to answer unemployment calls and plans to hire hundreds more, according to Eater New York.

Carlo Scissura, the president of the Building Congress, said he wanted to work with other industry groups to provide better services to undocumented construction workers. “You look at construction sites in the boroughs and you see a lot of undocumented workers doing the work,” he said during a Commercial Observer webinar this week. “It’s going to be our opportunity to connect these undocumented workers with benefits, because they have kids, they have rent payments. One thing we all agree on is ensuring that workers are safe and that they have a place to go after this. If someone is laid off we want to make sure they can get rehired again, that they have medical benefits.”

However, infrastructure and affordable housing construction work has been allowed to continue, meaning that laborers on those sites must choose between putting their health at risk to work or not getting paid.

“Our number one concern is the health of trade union workers and ensuring our sites have the appropriate safety protocols,” said Coletti. Empire State Development Corporation has mandated that any open construction sites must maintain at least six feet between workers, and sites that do not comply will face $10,000 fines for each violation and potential closure by the city Department of Buildings.

Essential construction includes utilities, hospitals, homeless shelters, public housing, any residential project where at least 30 percent of the units are affordable, and emergency work necessary to keep a site safe or to restore essential utility service. Contractors can file an appeal with the DOB to get their site re-classed as essential.

Brian Sampson, the head of the New York chapter of open-shop contractor group Associated Builders and Contractors, pointed out that all of the essential construction work that’s allowed to continue — roads, bridges, sewers, airports, public housing — is traditionally union-dominated.

“The non-union construction industry is going to take a harder hit,” he said. “A disproportionate number of minority workers are going to be out while we wait for the work to continue.”

He also claimed that few people were being paid off the books in non-union construction. “Nothing could be further from the truth,” he said. “Everybody is on the payroll; everyone is paid above board.”

Sampson claimed that undocumented workers could still be able to claim benefits if they had the New York City ID card, known as IDNYC.

“If you apply for unemployment benefits, as long as the Department of Labor can demonstrate you were employed and paying into unemployment, you can get benefits,” he said.

In addition, both the pandemic and the subsequent shutdowns are going to have widespread financial impacts on general contractors, subcontractors and workers themselves.

He argued that claims filed under New York State labor law Section 240, known as the Scaffolding Law, are going to skyrocket amid uncertainty over the safety of construction sites. Workers who are injured doing specific kinds of work can file claims under the law arguing that the site wasn’t properly secured, and the law mandates that contractors and owners are 100 percent liable.

“[Section] 240 claims are going to cause contractors to go out of business,” said Coletti. “[Workers] are going to claim they were injured working on a site that should have been closed, that the right safety protocols weren’t put in place.”

Lambeck felt that subcontractors, who are typically very small businesses, are going to suffer significantly during the construction shutdown.

“I think a lot of the smaller subcontractors are not going to survive this,” said the professor. “We were faced in New York with an escalation of costs because of tariffs. That situation is going to get even worse because of the supply chain issues. It may be a while until the whole supply chain opens up and starts bringing in material again.”

He added that contracting firms may well be forced to shoulder the cost of the shutdown, including the cost of paying security guards to watch a closed site.

He concluded, “I don’t think the construction industry is going to come back full strength right after this is over.”