Multifamily Stumbled in NYC, While the Rest of the US Did OK

What the @*$# Are You Looking At?: New York was always seen as a safe haven for multifamily investment, but thanks to tough new rent laws, the rest of the country isn’t looking too bad. 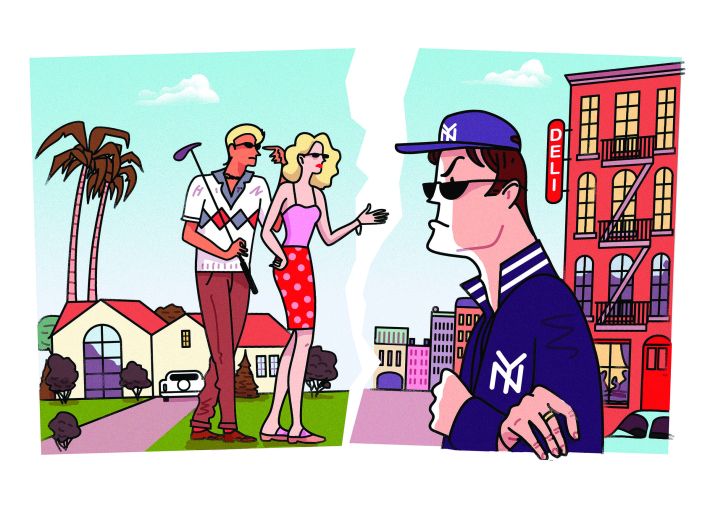 Multifamily investment in New York has stumbled thanks to new rent laws, while the rest of the country did O.K. in 2019. Illustration: Christophe Hitz

Low vacancy rate. Burgeoning population. Expensive real estate. The Big Apple’s multifamily market has always been the champion compared to the rest of the country, but the recently passed rent regulations have the city on the ropes and in danger of losing its title.

Multifamily stumbled in other parts of the country in 2019 but was still on track to pose record highs for sales volume, according to a CBRE report.

However, New York City’s multifamily investment sales had a disastrous 2019, with both dollar volume and the number of buildings sold significantly down from 2018. Numbers from brokerages, each offering their own glimpse of the market, are still being compiled for 2019, but Commercial Observer looked at the figures from several and saw a New York market in decline, compared to a relatively strong national market.

“In my 20-plus-year career I’ve never seen the type of impact from government that we are seeing now,” said James Nelson, the head of Avison Young’s tri-state investment sales team. “We all agree that affordable housing is absolutely essential here in New York; we all agree there is a housing crisis. We need more housing, no one is debating that. Unfortunately, what this rent reform did was — it did not create new housing, it froze everything in time.”

Cushman & Wakefield found that total dollar volume for multifamily sales in 2019 was $9.4 billion across New York City (excluding Staten Island), down 42 percent from 2018. The total number of buildings sold also dropped 36 percent in that same time.

That drop helped drive down the total dollar volume for all property types across New York City last year, according to Nishant Shah, an associate director at C&W’s New York research team. The total amount for all asset classes was $45.5 billion in 2019, a 15 percent drop from 2018, Shah said.

“A lot of that year-over-year decline can be attributed to multifamily,” Shah said. “Both multifamily and office are the biggest drivers in New York City. They both started the first quarter last year down. As the year went on they diverged, and office ended up seeing an uptick while multifamily kept declining.”

Shah said no borough was spared from the decrease, but Queens was “the least worst” for the year and was only down 17 percent year over year for the number of properties sold.

In Manhattan alone, total dollar volume for multifamily sales was just above $2 billion, a 31 percent decrease from 2018 and a significant drop from the $12 billion high of 2015, according to Nelson.

While New York is reeling, the rest of the country was doing relatively OK. Despite an expected dip in the total transaction volume between 2018 and 2019, multifamily sales nationwide were expected to still post a record year and had the highest level of activity among the major property types, according to a CBRE report.

In the third quarter of 2019 (the latest numbers available), transaction volume totaled $129.9 billion year-to-date across the country, a 6.4 percent increase from the same period in 2018, CBRE found.

However, in the third quarter itself, transaction volume dropped by 7.3 percent year-over-year to $46 billion, according to CBRE. The third-quarter drop, along with a really strong fourth quarter in 2019, make CBRE expect that total investments in 2019 will likely fall five to 10 percent below 2018’s record of $175.9 billion.

And while New York City’s $13.8 billion in transaction volume in 2018 put it clear above every other city in the country, others started to catch up in 2019.

Los Angeles came in third for multifamily transaction volume in 2018 with $7.54 billion, close behind Dallas-Fort Worth that had $7.55 billion, according to JLL. Avison Young numbers have L.A. — which also had new rent control laws passed in October 2019 — posting $9.1 billion total in 2019, close behind NYC’s $9.4 billion. (Numbers for Dallas-Fort Worth were not available yet.)

Investors scared off by New York City’s laws are looking at cities like Dallas, and others across the country, that lack rent regulation, said Shimon Shkury, the president and founder of Ariel Property Advisors.

“Florida and a lot of [investors] are going to Dallas,” Shkury said. “Cities that have less or no regulation and that have growth.”

Nelson said he has buyers who are looking to stay more local and considering investments in New Jersey, Connecticut and Westchester, N.Y.

Several other places are considering changes to rent laws, such as Oregon, meaning investors have to pay attention to each market’s political climate more than ever before jumping in, Avison Young’s Nelson said.

“You’ve got to pay attention to the protests that are happening in the streets,” he said. “That’s something you have to factor into the decision-making process.”

And it’s the political climate that brokers blamed the drop in multifamily sales around New York City on.

In June 2019, the newly Democratic-controlled New York State legislature passed a series of rent reforms despite outcry from powerful lobbying group the Real Estate Board of New York. The laws — which amended the state’s emergency tenant protection laws — limit landlords’ ability to raise rents for building and apartment renovation in the 966,000 stabilized apartments around the city.

The initial debate over the laws caused the multifamily investment sales market to dip slightly in the first and second quarter of 2019, but things really took a drop once they were passed, C&W’s Shah said.

A PropertyShark report found that sales volume fell 76 percent year over year across the city in the month of September 2019, totaling $284 million and the lowest figure on record since at least January 2018.

The third quarter of 2019 had a dollar volume of about $1.55 billion and saw a slight uptick in the fourth quarter, mainly due to one sale, Shah said.

The fourth quarter had a total dollar volume of $2.47 billion last year, but Shah said about half of that came from L+M Development Partners and Invesco Real Estate’s $1.2 billion purchase of five former Mitchell-Lama developments in Manhattan. Both developers plan to re-introduce more than 1,800 deregulated apartments back to affordable housing as part of the deal.

Despite the drop, experts haven’t counted New York City out as the champ yet.

“There’s still foreign investment, institutional investment, there’s still a confidence in New York, especially with this record office leasing,” Nelson said. “This is where the talent is, why do you think Facebook is taking 1.5 million square feet [in Hudson Yards]? … Investors are still very focused on this market.”

And while some buyers are scared off by the new laws and ditching the Big Apple, Shkury said he’s been in talks with plenty of new investors looking to jump into the multifamily market.

“For our company, the most important thing is seeing and interacting with the new capital that wants to invest in multifamily,” he said. “That is something that is going to be extremely interesting to see.”