J.P. Morgan, Deutsche Bank and Bank of America split the debt, which included a $275 million mezzanine piece and facilitated Blackstone’s acquisition of a controlling interest in the lodging company, Great Wolf Resorts. 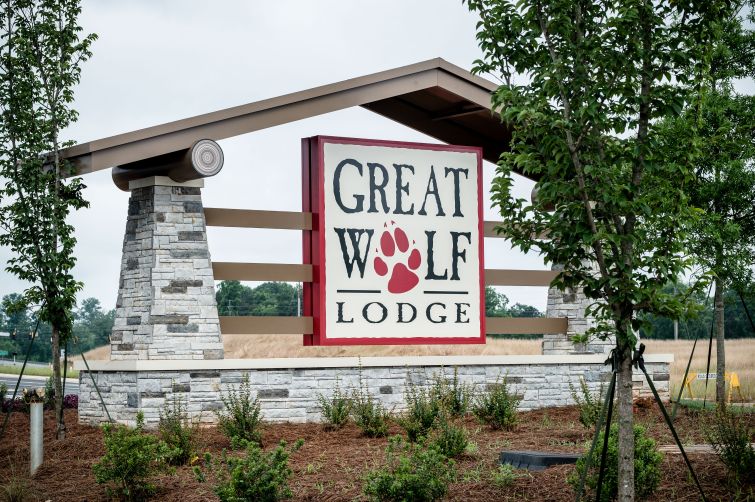 A sign outside the new Great Wolf Lodge in Lagrange, Ga., which opened in May 2018. Photo: Marcus Ingram/ Getty Images

Blackstone and Centerbridge Partners have nailed down close to $2 billion in CMBS financing from J.P. Morgan Chase, Deutsche Bank and Bank of America to refinance previous debt encumbering a portfolio of Great Wolf Lodge resorts located throughout the country, according to ratings agency reports that analyzed the transaction.

The package includes a two-year, $1.7 billion non-recourse, floating-rate loan that features three one-year extension options, according to information from Kroll Bond Rating Agency (KBRA). J.P. Morgan contributed $850 million in the deal, while Deutsche Bank and Bank of America each originated $425 million; the lenders also contributed an additional $275 million in mezzanine financing. The deal closed on Nov. 21, and the $1.7 billion first lien mortgage is in line to be securitized in the Great Wolf Trust 2019-WOLF single-borrower commercial mortgage-backed securities (CMBS) transaction.

The $1.7 billion proceeds, along with $431 million of equity pumped in by Blackstone and just under $229 million of retained equity from Centerbridge, retired about $1.5 billion of existing debt, took out around $242.7 million of previous construction debt and paid closing costs, per KBRA’s analysis.

As part of the deal, Blackstone acquired a 65 percent controlling ownership stake in Great Wolf Resorts from its partner Centerbridge, which retained a 35 percent stake, forming a roughly $2.9 billion ownership venture of the family-focused lodging and resort company. Blackstone announced the purchase in October.

“We have been very impressed by the evolution and growth of the company under Centerbridge’s ownership,” Tyler Henritze, Blackstone Real Estate’s head of U.S. acquisitions, said in a prepared statement in October, following the announcement of their purchase of Great Wolf. “With the leadership of its talented management team, Great Wolf has enriched the guest experience and opened seven new lodges since 2015. We look forward to investing in these properties to further deliver for guests and grow the company.”

The collateral behind the fresh financing package is a collection of 14 Great Wolf Lodge indoor water park and resort properties wholly owned by the sponsors and totaling 5,345 keys, which equates to just under $320,000 per guest room, according to KBRA. The deal also includes minority equity interests in two joint venture entities that each own a resort as well as a licensing agreement on a third property that’s owned and managed by a third party. Blackstone and Centerbridge’s 14 owned properties that make up the CMBS deal are spread throughout 13 states and were built between 1989 and 2018, with the very first Great Wolf Lodge property opening in Wisconsin Dells, Wis., in 1997.

Along with the main water park concept, the resorts feature a range of restaurants and food and beverage options as well as amenities such as arcades, full-service spas, fitness centers, meeting space and retail offerings. Twelve of the 14 properties in this new deal had previously been securitized in the Great Wolf Trust 2017-WOLF CMBS deal, which was paid off as part of this transaction.

In the previous 12 months ending this October, the 14 resorts were nearly 77 percent occupied and registered just over $195 in revenue per available room, per KBRA’s analysis. Of the 14 properties that make up the bulk of the transaction, two were just opened — near Atlanta and Chicago — in the summer 2018, and two others — near Colorado Springs and Minneapolis — opened in December 2016 and December 2017, respectively. The financial performance for the entire portfolio climbed considerably after these most recent additions, with cash flows jumping just over 8 percent from 2015 to 2016, to more than $132.5 million. In the previous year ending in October 2019, the portfolio’s cash flows had leaped to just under $199 million, as per KBRA’s analysis.

In a move to try to further increase net cash flow and revenues across the portfolio, Blackstone and Centerbridge are aiming at implementing new strategies such as the sale of water park day passes to customers who aren’t staying in guest rooms and adding fresh sources of revenue in the form of Build-A-Bear workshops and Great Wolf Candy Company stores.

Centerbridge bought Great Wolf Resorts from Apollo Global Management for nearly $1.4 billion in 2015, just three years after Apollo spent over $700 million to take the company private. Centerbridge has launched seven new Great Wolf Lodge resorts since it took the helm, now pairing with Blackstone to ramp up the expansion of the brand.

“We are enthusiastic about partnering with Blackstone to continue accelerating the growth of the company,” William Rahm, a senior managing director and global head of real estate at Centerbridge, said in prepared remarks in the announcement of the sale in October. “Blackstone is one of the most experienced and successful investors in the hospitality and leisure industries, and is highly supportive of Great Wolf’s growth potential and each lodge’s ability to provide unparalleled experiences for families.”