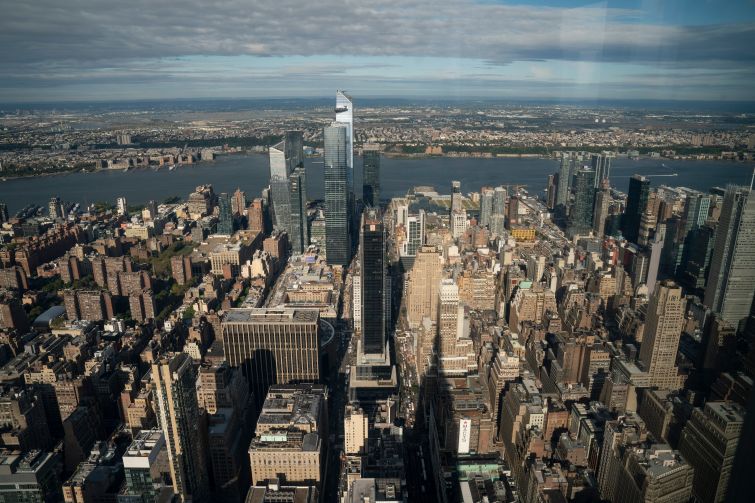 Wells Fargo is jump-starting Rockrose Development‘s planned residential skyscraper near Hudson Yards with a $255 million round of construction financing, according to New York City Department of Finance records filed this week.

The San Francisco-based lender originated a $218.7 million building loan and a $36.3 million project loan on Rockrose’s rental project, at 555 West 38th Street, in a deal that closed a week before Christmas and was filed with the city yesterday. Plans for the building, drawn up by Pelli Clarke Pelli Architects, call for a 52-story glass tower at the site, between 10th and 11th Avenues.

The lot is two blocks north of Hudson Yards — the massive commercial development from Related Companies and Oxford Properties whose first phase opened earlier this year — and just across the street from the Javits Center.

Excavation on the site has already kicked off, according to New York YIMBY, which paid a visit to the project in late October. At its planned completion in 2022, the building is set to bring 598 rental units to a neighborhood that, thanks to Hudson Yards’ residential component, has already added hundreds of apartments in the last few years.

Rockrose began buying the underlying land as early as 2001, The Real Deal reported, and added additional parcels in 2007 and 2012. It first filed land-use review applications in early 2016. Renderings of the project released by Rockrose show two tower trunks rising from a common base.

The building’s apartments will be a mix of studios and one- and two-bedroom units, the developer has said. Rockrose’s plan also includes about 1,600 square feet of ground-floor retail space.

Representatives for the development company and Wells Fargo did not immediately respond to inquiries.

Residential rents in Midtown West grew at 3 percent between November 2018 and November 2019 — a figure that lagged behind stronger performance in most of the borough’s other neighborhoods, according to residential brokerage MNS Real Estate.

Still, the neighborhood’s rental units have fared better than its condominiums. At Related’s 15 Hudson Yards, nearly half of the building’s condo units remain unsold three years after marketing began, The New York Times reported today. And buyers who have closed on units of late have paid, on average, rates discounted 7 percent from the building’s peak in 2017.

Related has also walked back earlier promises that it would finish Hudson Yards’ second phase by 2024, the Times said. A spokeswoman for Related did not immediately respond to an email seeking comment.