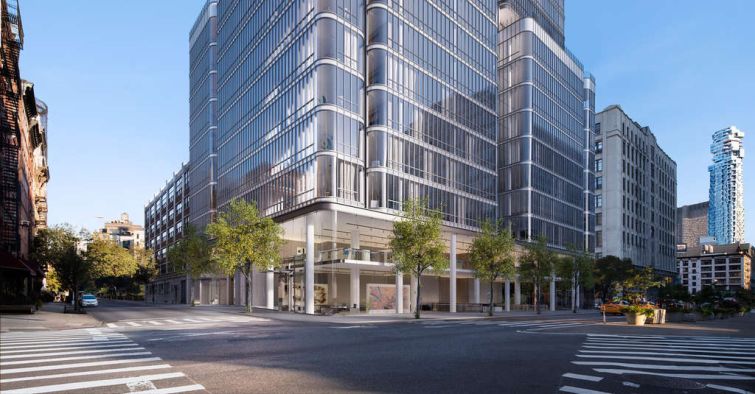 A rendering of the base of 565 Broome Street. Photo: CoStar Group

Halpern Real Estate Ventures and Bizzi & Partners Development have locked in a $166 million condominium inventory loan from Bank of China for their mixed-use residential condominium and retail building at 565 Broome Street in Soho, Commercial Observer has learned.

Construction on the project wrapped just a couple of months ago. Bank of China had previously supplied the developers with $320 million in construction debt in 2016 to build the $750 million, 330,000-square-foot luxury mixed-use property.

In January 2014, the developers — led by Halpern, according to its website — acquired the multi-parcel site at 565 Broome for $152 million. The developers broke ground on the project in December 2015.

Aronov Development was involved in the project’s construction alongside Bizzi and Halpern, while developer Michael Shvo and Cindat Capital Management, a U.S.-based Chinese private equity investment firm, are a part of the ownership group, according to the project’s website and information from CoStar Group.

In January 2016, the development partners got just over $450 million in financing for the project. The capital included Bank of China’s $320 million construction loan and a $135 million equity stake that was sold to Cindat, according to a report at the time from Crain’s New York Business.

Cindat had originally provided a $135 million loan to the development group to fund a transition from its acquisition of the site to Bank of China’s construction debt, according to Crain’s; Cindat’s loan was then converted into an ownership stake following the closing of the construction financing.

The 290-foot tall property — which was designed by famed architect Renzo Piano as his firm’s first residential project in the U.S. — comprises 115 residences spread across two 25-story towers that stand parallel to one another, with the first several floors connected by a transparent, glass internal “floating park” atrium that leads to outdoor terrace space, according to Shvo’s website. The interiors were done by Parisian designer Rena Dumas Architecture Interieure.

The property has around 26,000 square feet of retail space and 10,000 square feet of residential amenities. Those offerings include a 55-foot indoor lap pool, a fitness center, a yoga studio, a sauna and steam room, a children’s playroom and a clubhouse with a library, kitchen and bar. There are also 40 automated parking spaces that come with electric charging stations.

The property made a splash in September when the New York Times reported that billionaire Uber co-founder and former CEO Travis Kalanick bought a 6,734-square-foot duplex penthouse at 565 Broome called “Penthouse North” for over $36 million.