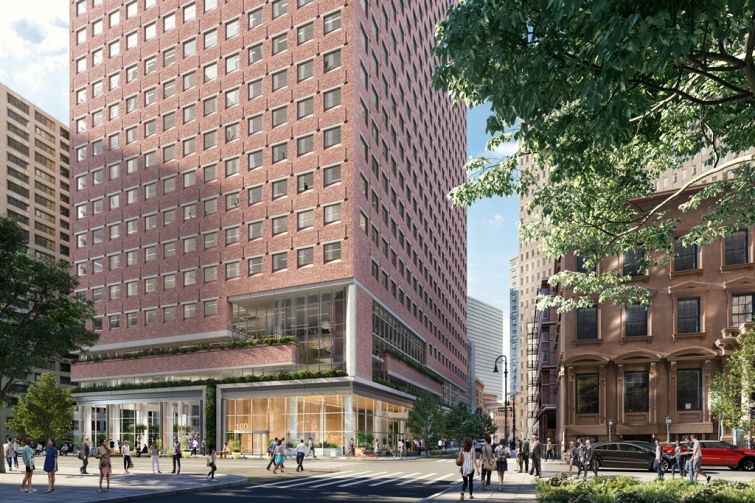 Square Mile Capital Management provided a $430 million construction loan to GFP Real Estate and Northwind Group for their redevelopment of 100 Pearl Street in the Financial District, according to the developers.

The owners will use the loan on the 970,000-square-foot property, formerly known as 7 Hanover Square, to modernize the more than 30-year-old building with a new lobby, mechanical equipment and infrastructure, according to GFP. The Real Deal was the first to report the news.

“We have always believed in the re-emergence of downtown as a place where tenants want to be,” Brian Steinwurtzel, the co-CEO of GFP, said in a statement. “We are thrilled to commence construction next week and add 100 Pearl Street to GFP’s growing portfolio.”

“The downtown office market continues to thrive with nearly six million square feet leased year to date,” Spies said in a statement. “GFP has clearly taken advantage of this momentum with an incredibly redesigned asset that will no doubt attract top tenants.”

GFP and Northwind Group went into contract to buy the 27-story building for $308.5 million in early 2018. Guardian Life Insurance, its biggest tenant in the building, had an option to buy the building, but GFP purchased their option. (Guardian moved its headquarters to 10 Hudson Yards last month, as CO previously reported.) GFP and Northwind have since restructured the deal with a total capitalization of $620 million, with $190 million in equity from GFP and Northwind. The owners plan to rebrand the property into two separate entities as 50 Water Street and 100 Pearl Street.

The 50 Water Street component will stretch from the ground-level to floor 17, and NYC Health + Hospitals inked a 25-year lease in January to take the entire 526,552 square foot section, as per CO. Owners plan to turn the 100 Pearl Street section into 400,000-square-feet of Class A office space with a 48,000-square-foot duplex penthouse.

“The 100 Pearl Street redevelopment has all the hallmarks of an outstanding project,” Square Mile’s Reimer said in a statement. “It is strategically well located in a very desirable submarket of Manhattan, with extremely strong sponsorship and an anchor tenant already committed.”

Guardian Life occupied the majority of the building since 1998 and had an option to take over the property from Milstein Properties, Weiler Arnow Management Company and Swig Company according to GFP. GFP purchased the option for around $150 million and assumed another $130 million in debt, plus other obligations, per Steinwurtzel.

Update: This story originally said that Guardian had exercised their purchase option over the property which GFP subsequently told CO they never did; and the closing was originally reported as having happened in September. This was also updated to include additional figures.