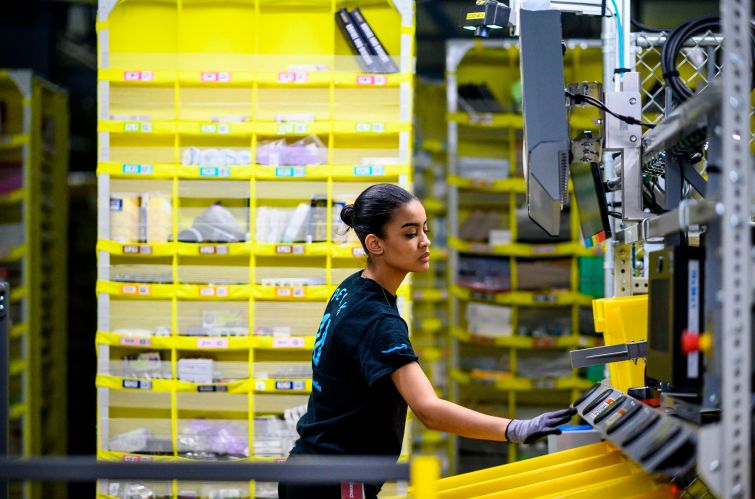 A woman at work in a logistics center. Photo: Johannes Eiselle/Getty Images

GIC, a Singaporean sovereign wealth fund, is the lender behind $1 billion of mezzanine debt in the financing for Blackstone‘s biggest-ever industrial acquisition, Commercial Observer has learned.

The loan is part of an overall $8.5 billion financing of a portion of the massive portfolio Blackstone purchased earlier this year from GLP, another Singaporean firm. GIC’s mezz loan funds the acquisition of a subset of that portfolio consisting of 406 properties in 18 different states, according to DBRS Morningstar, which analyzed the transaction.  Blackstone is buying the assets as part of a larger deal to take over 170 million square feet of U.S. industrial space.

Two industry sources, speaking anonymously because they weren’t authorized to talk about the transaction, confirmed GIC’s role as the mezzanine lender.

Good statistics on mezzanine debt are difficult to come by, but because such subordinate loans rarely exceed 10 percent to 20 percent of the capital stack, GIC’s loan is sure to go down as one of the largest commercial real estate mezzanine loans in history.

The industrial acquisition deal that secures the debt has nearly doubled Blackstone’s industrial holdings to 356 million square feet from 186 million, and boost the company past Prologis as the world’s largest industrial landlord.

Blackstone’s announcement of the acquisition in June described it as “the largest-ever private real estate transaction globally.”

“Logistics is our highest conviction global investment theme today, and we look forward to building on our existing portfolio to meet the growing e-commerce demand,” Ken Caplan, Blackstone’s co-head of real estate, said in a statement at the time. “Our global scale and ability to leverage differentiated investment strategies allowed us to provide a one-stop solution for GLP’s high quality portfolio.”

GIC’s loan is part of a financing package that supports a portion of that landmark acquisition, a group of properties representing 65.7 million square feet. The centerpiece of the debt deal is a $5.6 million commercial mortgage-backed securities loan from six lenders: Citigroup, Bank of America, Barclays, Deutsche Bank, Goldman Sachs and J.P. Morgan Chase.

The CMBS portion of the debt is itself the largest securitization of a single commercial real estate loan since at least the financial crisis, according to Asset Securitization Report. It well surpasses Blackstone’s previous largest CMBS deal as a borrower, supplanting a $3.5 billion debt package it received in 2014.

The new deal also has a $1.9 billion balance-sheet component, according to DBRS Morningstar. The lender behind that slice of the capital stack wasn’t immediately clear.

GIC is a minority owner of GLP, the seller in Blackstone’s acquisition. The pair have collaborated on real estate deals in the past: Last year, they worked together on a $2 billion fund to invest in value-add logistics projects in China, as The Straits Times, a major Singaporean newspaper, reported at the time. The year before, GIC approved of a Chinese firm’s acquisition of a majority interest in GLP.

Blackstone paid $10.55 billion for the 406 warehouses that secure the new financing, contributing $2.60 billion in equity to the transaction. The largest share of the properties are in Texas (94), California (79) and Florida (27). But the most valuable individual assets are elsewhere: the Woodinville Center in Woodinville, Wash., a pair of distribution centers in Cranbury, N.J. and another warehouse, called Lehigh Valley 13, in Breinigsville, Pa.

The two-year CMBS debt comes with three one-year extension options, and the loan’s floating coupon rate is set at 155 basis points above the 1-month Libor. The portfolio serves hundreds of tenants, and no one lessee accounts for more than 2.6 percent of the overall space. But some of the largest are The Home Depot, which rents 1.7 million square feet; Petco, which accounts for an even million; and Allied Beverage Group, a New Jersey liquor distributor, which rents 489,000 square feet.

Amazon, which rents space in six of the warehouses, accounts for about 1 percent of the portfolio’s rent roll.

Warehouses have become ever more crucial to the global economy as more consumption shifts to goods bought online that must be delivered to homes and workplaces. Quarterly U.S. internet retail sales have increased more than fourfold over the last decade to more than $584 billion, according to U.S. Census Bureau statistics.

A spokeswoman for Blackstone declined to comment. GIC did not immediately respond to an inquiry.