Under Construction: Admiral’s Row and Building 127 at the Brooklyn Navy Yard 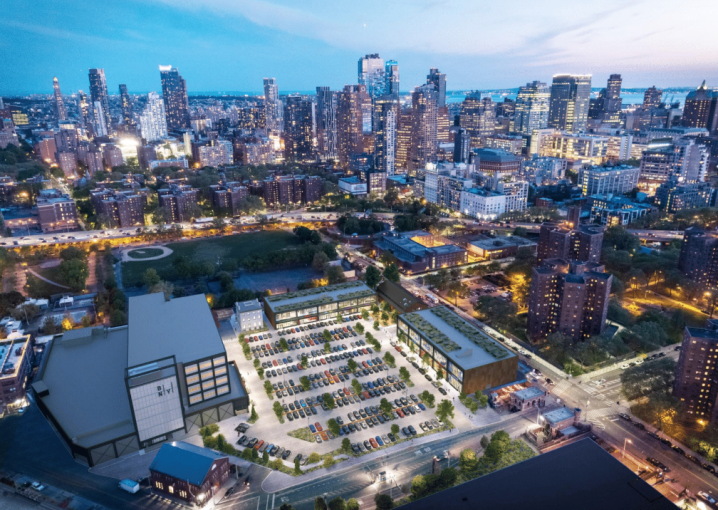 An overhead rendering of the planned Admiral's Row complex at the Brooklyn Navy Yard, which will include retail, industrial and office space. Rendering: S9 Architecture 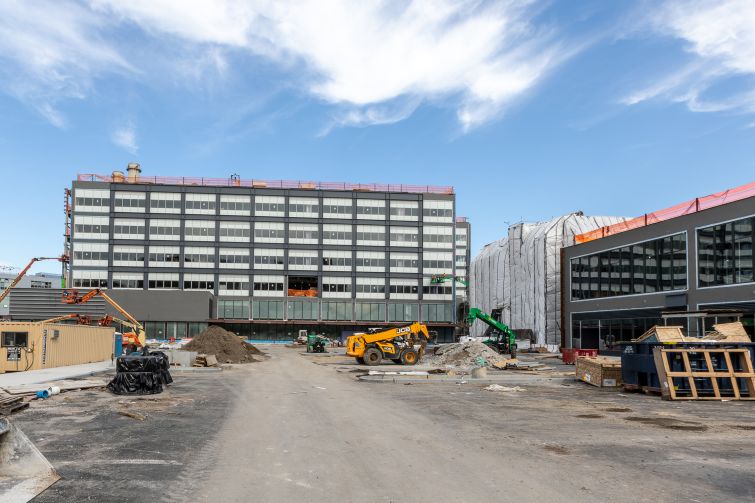 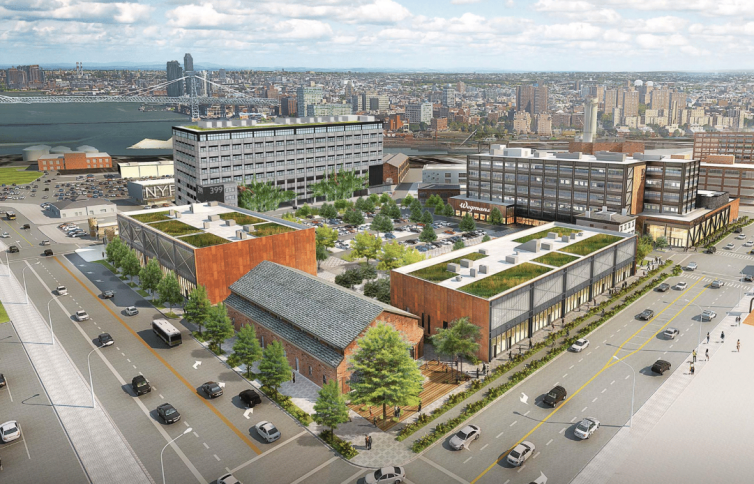 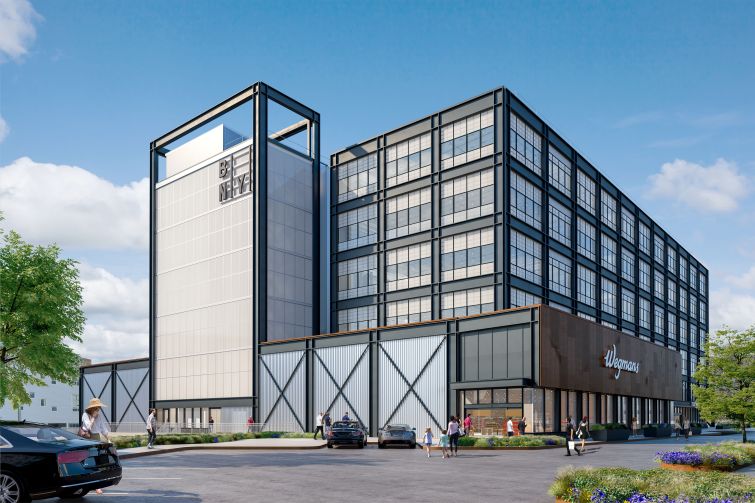 A rendering of the finished industrial and office building at 21 Flushing Avenue, which will include the ground floor Wegman's. Rendering: Volley Studio 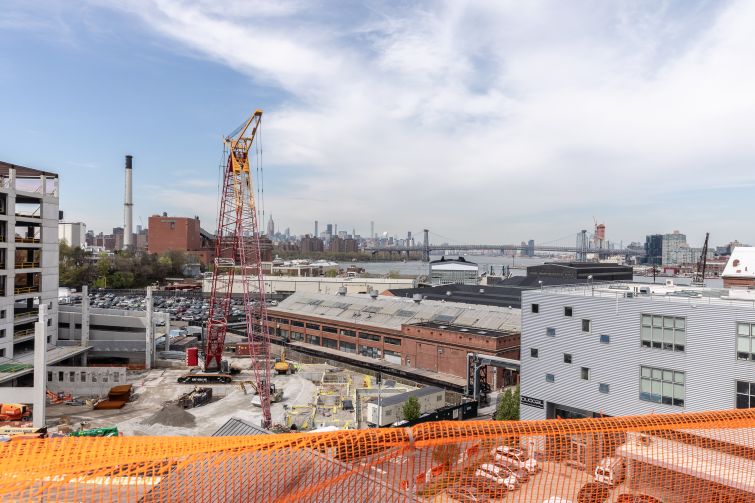 Views of Manhattan from the 4th floor of the new retail and office building in Admiral's Row. Photo: Melissa Goodwin/For Commercial Observer 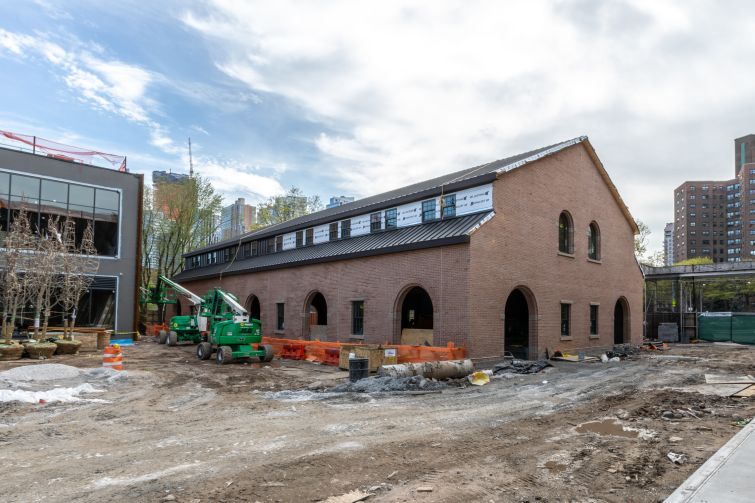 The Timber Shed, which was once used for curing ship masts, will become part of the retail complex at Admiral's Row. Photo: Melissa Goodwin/For Commercial Observer 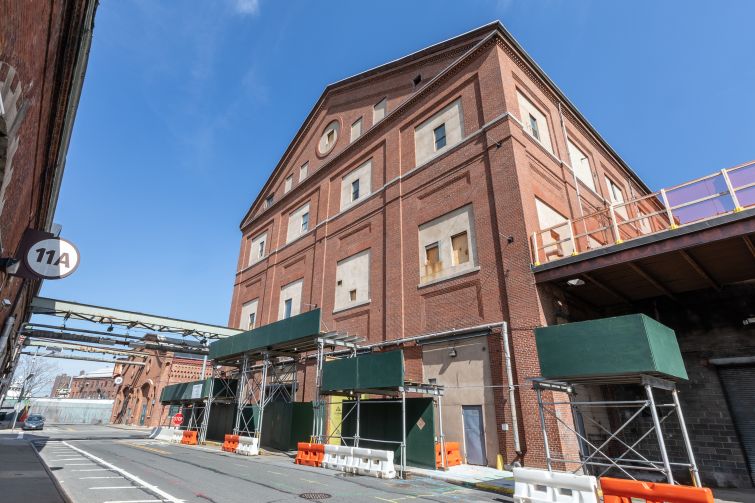 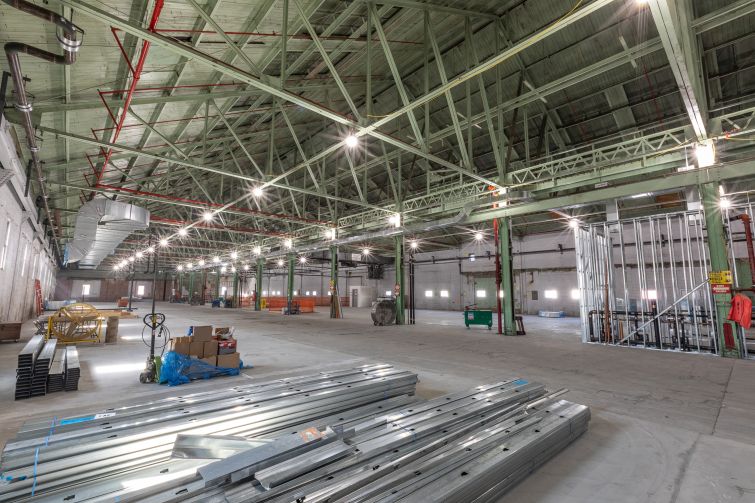 The historic catwalk and other details on the top floor of building 127 at the Brooklyn Navy Yard will be preserved and turned into a new office space. Photo: Melissa Goodwin/For Commercial Observer 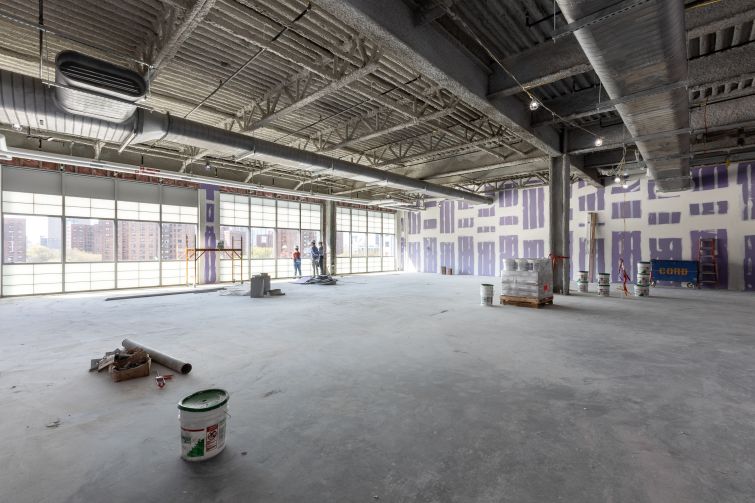 A large west facing office space on the 5th floor of the Wegman's building in Admiral's Row at the Brooklyn Navy Yard. Photo: Melissa Goodwin/For Commercial Observer
Previous Next

When the Brooklyn Navy Yard decided to tear down a row of decaying, 19th century wood frame homes along Flushing Avenue in 2009, local preservationists were outraged.

Mayor Michael Bloomberg pledged to redevelop the collection of properties, which were known as Admiral’s Row because they once housed naval officers, in 2010. But one developer was ensnared in a bribery scandal and another failed to insure the homes before they were hammered by Superstorm Sandy. Several years passed before the National Guard, which controlled the houses, officially transferred the property to the Brooklyn Navy Yard Development Corporation (BNYDC), a nonprofit created by the city in 1981 to manage the 5-million-square-foot former shipbuilding complex.

Eight of the 10 houses finally bit the dust in 2016, following years of back and forth between the Navy Yard, the federal government, activists and developers. When Doug Steiner’s firm, Steiner NYC, was tapped to take over the swath of land five years ago, the developer quickly landed upstate grocery store chain Wegmans as an anchor tenant. The rest of the project began to take shape around the 74,000-square-foot grocery store—85,000 square feet of additional retail divided between two other two-story buildings, a 266-space open parking lot, and a nine-story parking garage and light industrial building at 399 Sands Street that will have room for 435 cars on the first four floors.

Wegmans will occupy the ground floor of a six-story building, known as 21 Flushing Avenue, that will have 130,000 square feet of light industrial and office space. And 399 Sands will host another 220,000 square feet of commercial space on its upper floors. S9 Architecture designed all of the Admiral’s Row buildings except for 399 Sands, which was done by Dattner Architects. Two historic structures, the Timber Shed and a home dubbed Quarters B, are being preserved as a restaurant and community space, respectively.

For the Timber Shed, developer Doug Steiner said his construction team disassembled the old structure and rebuilt it with new bricks that resembled the historic ones. The original bricks will be used to clad the interior walls, and the new version will feature arched windows and wood trusses just like the original, 19th century version. At Quarters B, a Greek Revival home that had been abandoned for half a century, “the level of structural deterioration was frightening, so it was hard to stabilize,” Steiner said. “We are spending a lot of money—too much, in my opinion—to preserve it, but that’s the cost of doing the project.”

When Commercial Observer toured the project last week, the retail buildings were nearly complete; their glass storefronts had been installed and the sides of the buildings had been outfitted with rust-colored corten steel. The manufacturing-and-Wegmans structure had gotten the majority of its windows and dark gray facade paneling reminiscent of steel, and workers had installed some of the corten steel paneling on the sides. Much of Admiral’s Row is expected to be complete this fall, with 399 Sands Street scheduled to wrap construction in 2020.

The Navy Yard has just begun marketing the five stories of commercial space at 21 Flushing Avenue. The floors have been split up into relatively small sections—roughly 1300 to 10,000 square feet—to accommodate little industrial and office tenants. Asking rents are in the $20s for the industrial space and in the $40s for offices, according to David Ehrenberg, president of the yard’s development corporation.

“This is really the sweet spot for industrial companies,” Ehrenberg explained. “It’s hard to find smaller units. We’ve recently been leasing larger square footage spaces in different buildings because of the building layout. But this isn’t a particularly wide building. And we can kind of subdivide to much smaller units without it starting to feel like a bowling alley.”

And a couple hundred feet away from Admiral’s Row, BNYDC has just begun revamping a turn of the century brick manufacturing property known as Building 127. The three-story, pitched roof structure is getting new but historically accurate windows and upgraded mechanical systems, including new freight elevators. The 95,000-square-foot building was originally used to build smaller ships, said Ehrenberg, and the shipbuilding company’s engineering department likely occupied the top floor. The building’s incredibly high ceilings—which reach close to 30 feet on the top floor—along with its unique historical features, like suspended catwalks and cranes along the ceiling, will remain. The property has been vacant for the past two years, but its most recent tenant was Sweet N’ Low manufacturer Cumberland Packing.