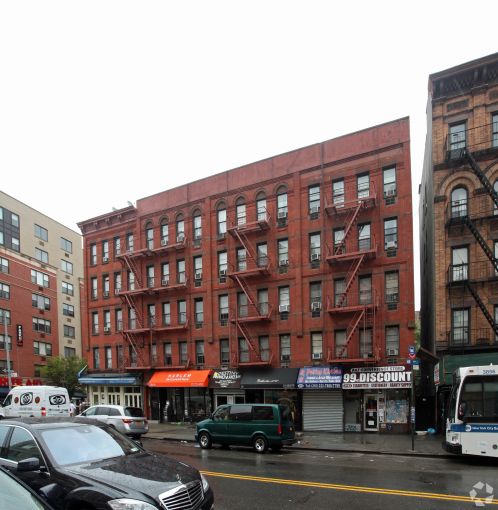 Landlord Michael Aryeh has locked down a $22.8 million refinancing from J.P. Morgan Chase for a quartet of adjacent rental buildings he owns in Harlem, according to city property records.

The debt deal, which closed on April 11, backs Aryeh’s properties at 276, 278 and 280 West 117th Street, as well as 2162 Frederick Douglass Boulevard, all four of which stand side by side on the block of West 117th Street between Frederick Douglass Boulevard and St. Nicholas Avenue. The transaction partially refinances a larger $37.5 million deal from People’s United Bank that closed last May. That deal was additionally secured by three of Aryeh’s other Harlem buildings: 272 and 274 West 115th Street, and 1 Convent Avenue, at the corner where Morningside Avenue meets West 127th Street.

The four buildings in the new deal are a group of five-story walk-ups built in 1910, according to CoStar Group. The slender West 117th Street properties have just one apartment per floor, while the stouter building on Frederick Douglass Boulevard has 66 units. In all the refinanced buildings sum up to just over 60,000 square feet of living space.

In a contract signed this month, a three-bedroom unit at 276 West 117th Street was rented for $3,025, according to StreetEasy. And in the Frederick Douglass Boulevard building, someone rented a studio this week for $2,000 per month.

Rents in Harlem have roughly held steady over the last year, according to MNS, a real estate brokerage. In March, the average cost of a one-bedroom apartment in a non-doorman building was $1,2,269—almost exactly unchanged from the level in March 2018. Rents for studios ticked up a hair over that period, while the monthly price of two-bedroom units actually declined slightly.

Representatives for Reliance Realty—the Aryeh-associated company that manages the buildings—did not immediately respond to an inquiry, nor did a spokeswoman for J.P. Morgan Chase.