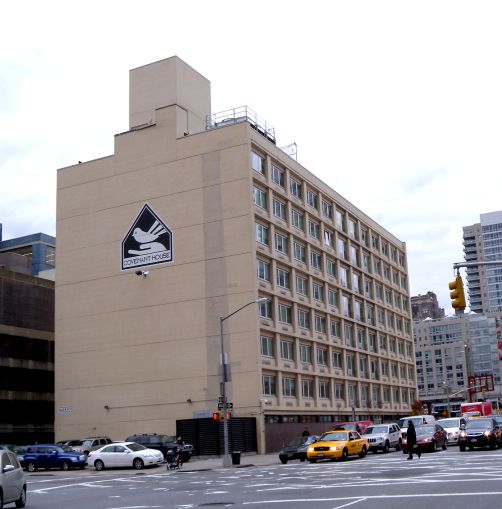 One of Covenant House's current buildings on the West Side. Photo: Wikicommons

A charity that helps homeless young people is getting a $61 million loan from Goldman Sachs’ urban investment group to renovate its shelter on the West Side, Commercial Observer can first report.

The aid group, Covenant House, will use the funds to demolish part of its existing facility at 550 10th Avenue between West 40th and West 41st Streets, in order to build a new 12-story building there. Gotham Organization has been tapped to lead the development of the 80,000-square-foot property, which will have space for temporary housing, a health-care operation, counseling and job training.

“For the first time in our history, we’ll be designing and building a new residential facility from the ground up,” Sister Nancy Downing, the charity’s executive director in New York City, said in a statement. “The new Covenant House facility will be designed to the particular needs of our youths, allowing us to provide robust services and coordinated care, expanding the scope of our work and the number of young people we can serve.”

When construction on the new Covenant House facility is through, the organization will pay back Goldman Sachs by selling additional land it owns along 10th Avenue to Gotham, which will build a 40-story apartment building there, according to Bryan Kelly, Gotham’s executive vice president for development.

“Our purchase price will enable [Gotham] to pay off the construction debt as well as to purchase, in our future building, offices for Covenant House,” Kelly said. “It really is a cradle-to-grave type of development.”

The organization’s current complex is a hodgepodge of outdated buildings that include a former motel and a structure that used to be a detention center. Working with Gotham to finance a redevelopment which will allow the charity to stay in one place was critical, Kelly said, because any other plan would have threatened the organization’s services.

“If Covenant House was to just try and sell the entire site, where would they be able to identify a location in the interim to house their youth?” Kelly said.

Any given day, the charity’s West Side crisis center houses around 120 homeless people ages 16 to 21, most of whom are originally from the New York City area, Downing told CO. A staff of 250 works around the clock to care for them and provide education and medical and legal services.

Some of the program’s residents participated in designing the new building, which will include protected outdoor space and a gymnasium below street level. It will also allow services to be organized more sensibly.

“The health clinic has been on the fifth floor at the back of one building, but now it will be right next to the intake and welcome center,” Downing said. The legal counseling room, which had been in a separate building, will be brought closer as well.

Groundbreaking is planned for September, with construction scheduled to finish by summer 2021.

A representative for Goldman Sachs did not immediately respond to an inquiry.