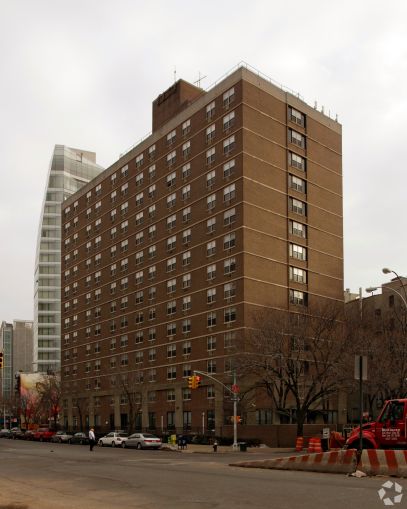 A nonprofit dedicated to seniors’ housing and health has obtained a $50 million refinancing on an apartment complex for the elderly in the East Village, according to city property records.

The group, Jewish Association Serving the Aging, nabbed the debt from Orix Real Estate Capital, a Texas investment firm that lends on real estate nationwide. The loan, which closed on February 14, is insured by the Department of Housing and Urban Development (HUD), according to the deal documents.

Orix’s loan refinances prior government-backed lending on the building, known as the Evelyn & Louis A. Green Residence, at 200 East Fifth Street—with an alternate address of One Cooper Square. Running the full block along The Bowery between East Fourth and East Fifth Streets, the 110,000-square-foot building houses elderly people in 150 units in a 14-story building that went up in 1985, according to CoStar Group data.

To qualify for a spot, would-be residents must be at least 62 years old and earn low or moderate levels of income. Disabled people can also qualify, but being Jewish isn’t a prerequisite, according to the organization’s website. Demand is so high for an apartment, JASA reports, that all its units citywide are full, and so is its waiting list.

The organization’s other Manhattan senior-living facility is about a mile east, on East Third Street between Avenues C and D. The nonprofit also runs three housing sites for the elderly in Queens—all in Far Rockaway—and a trio in Brooklyn, clustered on the peninsula shared by Brighton Beach and Coney Island.

HUD has two programs, Section 232 and Section 232/223(f), that insure loans on seniors’ facilities: the former for construction and major repairs, and the latter for simple refinancings. Representatives for the lender and the borrower didn’t immediately respond to inquiries about the purpose of the new debt on the Green Residence.

The Section 232 programs allow for debt of at least 35 years, and at loan-to-value ratios as high as 90 percent for nonprofit sponsors—far more generous executions that the private market would likely bear.Between 2005 and 2015, the number of people older than 65 in New York City rose by nearly 20 percent—to over one million from 947,000, according to a report by the City Comptroller’s Office. Sixty percent of seniors rent their apartments and the majority of those renters pay landlords more than a third of their income each month, making seniors especially sensitive to affordable-housing concerns, the comptroller, Scott Stringer, said.