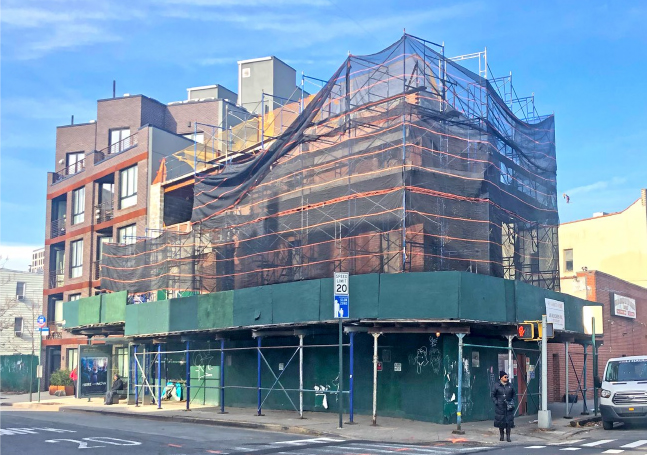 “We’ve been retained to restructure the portfolio, [Brookland’s] debt and the equity position, as well as potentially dispose of it as well,” Marc Shulman, a principal at Icon Realty, said. The package contains around 15 properties in various stages of development, per Shulman.

“Ideally, we want to recapitalize the projects and help Boaz see them to the finish line,” he said, though they’re exploring selling the properties as well.

Gilad has been shopping around a number of his properties over the last few months. TerraCRG is marketing several Brookland properties, as Commercial Observer first reported last month, and SME Capital Ventures is reportedly in contract to buy 691 Marcy Avenue, a Brookland rentain Bedford-Stuyvesant, according to The Real Deal. A spokeswoman for TerraCRG confirmed that two of the properties it’s marketing, 807 Washington Avenue in Crown Heights and 658 Washington Avenue in Prospect Heights, are still on the market.

Brookland’s troubles came to light in November 2018, when Gilad first reported to bondholders in Tel Aviv that he would not meet approaching payment deadlines. The company was juggling a large number of small and medium-sized condo developments, and had fallen behind schedule, and into default on a number of them.

Those problems have since intensified. Brookland has been sued by several lenders and investors in both Israel and New York, and Goldman Sachs has initiated a foreclosure proceeding on one of Gilad’s properties. Today, a group of Israeli investors filed suit in a Brooklyn court to try and recoup their $2 million investment in a Brookland project at 56 East 21st Street in Flatbush that never materialized.

Earlier this month, Goldman Sachs moved to foreclose on 929 Atlantic Avenue, a 19-unit condo building in Clinton Hill, which launched sales in late 2018. Brookland borrowed $11.4 million from the investment bank in August 2018, and hasn’t made any payments since, according to the complaint. In addition, at least 10 of the project’s contractors have placed mechanic liens on the property in the last several months.

In January, another lender, Hirshmark Capital, sued over the property next door, at 925 Atlantic Avenue, which appears to be a part of the same development. Hirshmark bought a $5.4 million note on the property in November 2018 after it was already in default.

Also last month, a group representing the Israeli bondholders whose bonds are backed by Brookland’s properties, sued over their losses in Tel Aviv. But this week, a judge granted the company a 90-day injunction, so it has time to work out the network of competing claims on the properties without further complicating the matter.

In January, Gilad resigned from Brookland Upreal, the subsidiary overseeing Brookland’s affairs in Israel, and the company is now in the hands of a special overseer.

Any sale here however would impact the bondholders, and Gilad continues to be in contact with his colleagues in Israel, Shulman said.

The properties Icon is marketing range in size from six to 60 units. “They’re currently set up as condos, and part of the exploration of the options is if there’s potentially a way to make these work as rental buildings,” Shulman said. He said that there are groups expressing interest on all levels of the deal, and that the exit value should be roughly $260 million.

Hirshmark Capital and Boaz Gilad did not respond to requests for comment, and a spokesman for Goldman Sachs had no immediate comment.