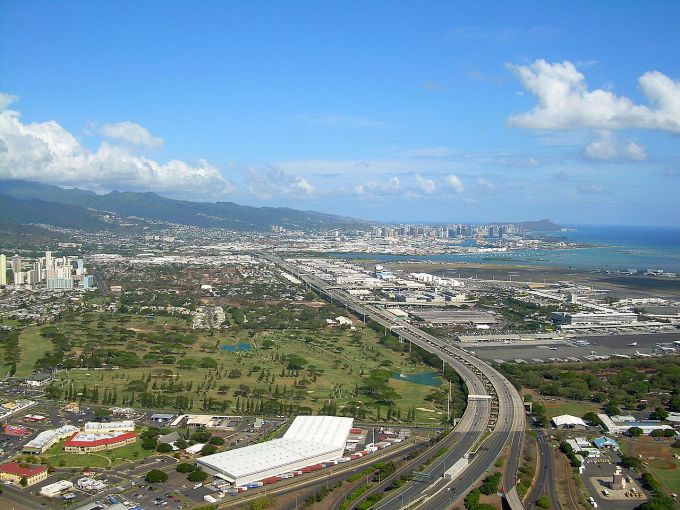 A view of Oahu. Photo: Wikicommons

A set of four big banks has lent $650 million to Industrial Logistics Properties, secured by a portfolio of assets it owns on the Hawaiian island of Oahu, the landlord announced this week.

The debt, which included contributions from Morgan Stanley, Citigroup, UBS and J.P. Morgan, comes at a 4.31 percent interest rate over 10 years—tailor-made, it would seem, for inclusion in a CMBS transaction.

Securing the loan are 186 properties, including a mix of ground leases and owned buildings. Occupancy is nearly 100 percent, and the average remaining lease term is nearly a decade and a half.

Industrial Logistics, a real estate investment trust, trades on the Nasdaq as ticker ILPT, and shares climbed about 2 percent after the deal was announced yesterday. The properties backing the new loan—about 9.6 million square feet in all—account for just over half of the company’s Hawaiian footprint.

The company didn’t specify in the announcement which of its Oahu properties it was mortgaging in the deal. Its biggest holdings on the island—Hawaii’s most populous—are 129 ground leases in Mapunapuna, an industrial district of factories and logistics buildings near Honolulu’s Daniel K. Inouye International Airport.

It also controls a set of eight industrial buildings on Sand Island, a small island at the entrance of Honolulu’s harbor.

John Murray, the REIT’s CEO, said the debt is a vote of confidence in Industrial Logistics’ portfolio.

“We are pleased to term out our floating rate debt with attractive long term fixed rate debt and to demonstrate the tremendous value of these unique Hawaiian assets,” he said in a statement. “While the underlying assets had a net book value of less than $500 million at year end 2018, this loan provides us with $650 million of capital to fund value-enhancing external growth opportunities. We believe that with a loan-to-value ratio of less than 50 percent, this transaction further demonstrates the value of ILPT’s high quality properties, which are leased to a diversified tenant base and produce stable cash flows from long term leases.”

Eastdil Secured brokered the debt on behalf of the REIT, which is headquartered near Boston in Newton, Mass.

The company hasn’t released year-end results for 2018 yet, but net income for the year’s first nine months was $56.1 million, down from $64.8 million in 2017. The REIT, formed in early 2017 as a subsidiary of Select Income REIT, has industrial properties in more than two dozen states.

A spokeswoman for J.P. Morgan declined to comment. Spokesmen for the other three lenders did not immediately respond to inquiries.