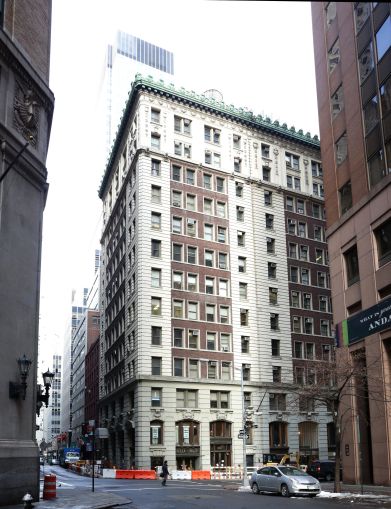 Otto Gerdau Company has controlled the building, at 88 Wall Street, since, at latest, 1970, according to New York City Department of Finance data, although the company transferred ownership to a special-purpose holding company earlier this year.

Built in 1903, the 13-story building—which is also referred to as 80 Wall Street—hosts 50,000 square feet of office space, including the offices of the building’s ownership group. Other entries on the varied tenant roster include logistics companies, small financial offices, an auto-towing firm and alternative-medicine clinics—the vast majority of which lease less than 2,000 square feet.

Otto Gerdau Company traces its roots to 1872, when a German immigrant of that name founded an import operation in New York City. Following Gerdau’s death in 1920, his son Allan, who had joined the company in 1917, helmed its operations for more than 65 years before he died in 1986. His will passed control of the company to a trio of New York City religious groups, which have since sold it to a Florida industrialist, according to research published by the Smithsonian Institution.

The Otto Gerdau Company could not be reached. A representative for G4 Capital, which lends primarily on commercial and residential projects around New York City with debt balances below $50 million, did not immediately respond to a voicemail.