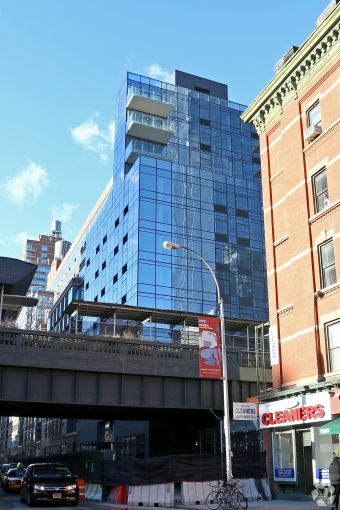 Lalezarian Properties, a Long Island-based commercial developer, has nabbed $220 million in financing from the New York State Housing Finance Agency to refinance a residential project in Chelsea, according to documents filed in city property records today.

The deal, which closed on September 7, refinances construction debt from 2013 lent by a partnership of the HFA, Wells Fargo and New York City, records show. The HFA’s role is to promote affordable housing by financing projects that include apartments set aside at below-market rents. A spokesman for the agency did not immediately respond to an inquiry.

Lalezarian’s buildings, at 507 and 509 West 28th Street between 10th and 11th Avenues, directly abuts the High Line, a park built atop an unused elevated railway spur. Since it opened in 2009, the park has been the focal point of a residential renaissance on the far West Side along its length, a trend that includes Lalezarian’s building, which went up in 2017.

The property is part of a three-building multifamily campus totaling 375 apartments. Its largest building is the tower at 507 West 28th Street, which includes 291,000 square feet of living space as well as a 16,000-square-foot ground-floor retail store, offers a pool and a roof deck. A squat one-story commercial building built in 1930 was demolished to make way for the new 35-story tower’s construction.

All three buildings were designed by Avinash K. Malhotra Architects, a firm led by its eponymous principal from an office in Chelsea.A Lalezarian employee declined to comment on the transaction, saying only the company’s owners were “very private.” A New York Times wedding announcement from 2007 stated that the company was controlled by Flora and Frank Lalezarian of Great Neck, N.Y.

Update: This article was amended to include additional debt that was also part of the transaction.