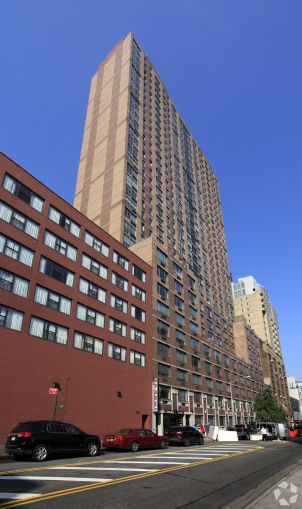 The Dermot Company, a Manhattan-based developer, has landed an $120 million mortgage from HSBC to fund its purchase of a Hell’s Kitchen residential building, according to property records filed today.

Dermot went into contract to buy the skyscraper, 520 West 43rd Street, in April, The New York Post reported at the time. According to New York City Department of Finance records, the final sale price was $193 million, implying a 62 percent loan-to-value ratio. Both the sale and the financing that supported it closed on Aug. 1.

Gotham Organization built the 35-story tower in 1998, setting aside 20 percent of its 375 apartments for affordable housing. AEW Capital Management, the seller in Dermot’s acquisition, purchased the building, known as The Helux, in 2013 for $170 million.

The Helux, which stands between 10th and 11th Avenues, includes amenities such as an indoor basketball court, a parking garage and a playroom for children, according to its website. A 476-square-foot studio in the building was rented this month for $3,000 per month, while a 850-square-foot two-bedroom unit was leased for $4,700 in the middle of August, as per data from StreetEasy.

Representatives for Dermot and HSBC did not immediately respond to inquiries.