The Plan: Herald Towers Goes Back to Its Hotel Roots 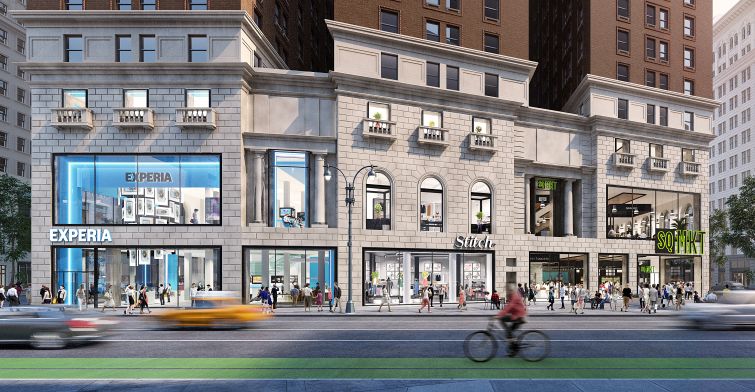 It was billed as the world’s largest hotel by room count—with about 1,000 keys—when it was built as Hotel McAlpin in 1912. It was then converted to 700 rental apartments in 1980.

JEMB Realty acquired the building at 50 West 34th Street at the corner of Broadway for $150 million in 1999. And now two decades after purchasing what became the Herald Towers apartment building, JEMB is overhauling the property to, ironically, make the rental building hotel-like by loading it up with amenities for a younger demographic.

“Younger people don’t want to be in their apartments for too long,” Louis Jerome, a principal at JEMB, told Commercial Observer during a recent tour of the building. “They want areas to socialize—they want areas to connect with other people. They want almost like a hotel feel. With this building we’ve taken that concept to heart and we have incorporated that into the amenity spaces that we are building out.”

In the first part of the renovation, which is estimated to cost more than $60 million, JEMB converted old locker rooms into a full gym on the 24th floor last fall. The locker rooms were part of a New York Sports Club, which moved out of the building eight years ago.

Later this year, JEMB plans to renovate the common areas—corridors and elevators—and add a tenant lounge and library on the top of the building. JEMB will also add some penthouse units and make an outdoor terrace for those apartments out of a setback on the 25th floor. Fogarty Finger is the project’s architect.

Currently, JEMB is completely renovating apartments as they become available. (The building is 97 percent occupied.) In some cases, the landlord plans to turn larger units into smaller ones, like making a 1,000-square-foot one-bedroom unit into a two-bedroom unit or carving it into two studios.

In addition to amenities inside the building, JEMB is working with city agencies to widen Greeley Square Park, which is adjacent to Herald Towers, by shutting down Broadway at West 33rd Street to vehicular traffic. And JEMB will relocate the building’s lobby from the busier West 34th Street to West 33rd Street so residents can exit the building at the entrance to the public park.

The new lobby will feature soaring double-height ceilings, plants and a new security desk. JEMB representatives also said they are building a nearly 1,000-square-foot mailroom (50 percent larger than the size of the current one), since residents are using more online delivery options, like Amazon and Jet.com.

Putting the 2,000-square-foot lobby on West 33rd Street also has the benefit of giving the building more retail space on the main corridor. And the West 34th Street retail space comes with the building’s canopy, which could be used for branding.

“This lobby…it’s got incredible value to us as a retail space and 33rd Street is a much sleepier block,” Jerome said.

Herald Towers boasts a total of 110,000 square feet of retail on the lower level, first, second and third floors. It is occupied by Forever 21, which is relocating nearby, Gap until 2020, and a few smaller retailers. JEMB has started marketing the space with an RKF team led by Peter Whitenack and Robert Futterman as all of the leases are soon due to expire. It was not clear if Gap intends to renew. (A Gap representative declined to comment.)

JEMB plans to move a staircase to free-up more space in the retail area. And the developer will widen windows and restore the limestone facade of the building, which is mostly intact save for a greenish-granite that was placed on the lower levels of the building on the West 33rd Street side decades earlier. That greenish stone base will be reverted to match the rest of the limestone base. Work on the retail side will commence, Jerome said, as soon as new transactions are signed.