Silver Lining: Projects to Watch Along the Silver Line in Tysons 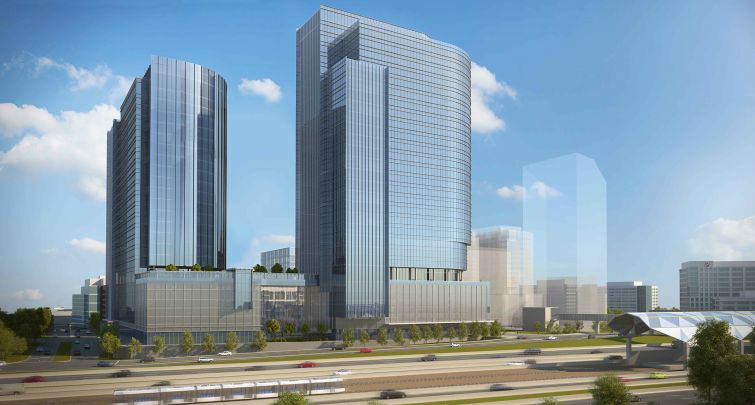 Since the Washington Metropolitan Area Transit Authority opened the Dulles Corridor Metrorail Project—also known as the Silver Line extension—in July 204, developers have been competing to carve out walkable neighborhoods in the Virginia communities of Tysons Corner and Reston.

Tysons, the larger of the two areas, is being developed in pieces, according to Greg Trimmer, an executive vice president at JBG Smith Properties—a developer in the region. “It has five or six distinct neighborhoods that stand on their own,” Trimmer told Commercial Observer. Reston is a more cohesive town, he noted. “It’s tied to parks, trails and a lot of open space.”

For decades before Metrorail hit this end of Northern Virginia, Reston was known for its eponymous town center, which Trimmer called “the preeminent suburban town center in the county.”

In anticipation and arrival of the new transit outposts, Reston Town Center began to get some company. Between 2013 and 2016, 118 commercial buildings and 14.6 million square feet of rentable space (office, retail, industrial, flex, healthcare, religious, educational, utility, and some government properties) were completed near stations along the entire Metrorail system (which includes 91 stations in D.C., Maryland, and Northern Virginia), accounting for 35 percent of all square footage of construction during that time in the region, according to a report published by the Metropolitan Washington Council of Governments in April.

For varying reasons, it’s clear to D.C. commercial real estate insiders that development along the Silver Line is only picking up.

“They’re trying to change Tysons from just being car-centric and split up to bridging the gap to the Metro,” said George Vogelei, the executive vice president of tenant advisory services at Transwestern.

Besides transportation use, “the other really big driver [of development there] is the belief that ‘if I put my office near the Metro, that’s going to be the center of the universe and tenants see that,’ ” according to David Gast, an executive vice president at Colliers International.

Both Gast and Vogelei point to The Meridian Group’s development The Boro in Tysons as a project that’s bringing prime amenities near Metro in an effective way.

The 4-million-square-foot development, which is currently under construction within walking distance of Greensboro Metro station, will feature three residential buildings and approximately 2 million square feet of office and retail space anchored by a 15-screen ShowPlace Icon theater and a 69,000-square-foot Whole Foods—the grocer’s largest outpost in the D.C. region. Both venues are slated to open in summer 2019.

Boro Tower, Meridian and Rockefeller Group’s 20-story trophy office building that is part of The Boro, will be completed this October. Media company TEGNA has pre-leased 46,200 square feet in the 437,000-square-foot tower, according to a Meridian spokeswoman. Hogan Lovells, an international law firm, has pre-leased 44,520 square feet.

The development’s office spaces are renting in the mid-$50s per square foot, the spokeswoman said. That’s slighter higher than average rents, according to a recent Transwestern report that found asking rents for offices in Northern Virginia are $45 per square foot for locations within 0.25 miles of Metro stations, about $37 for areas between 0.25 to 0.5 miles away and $35 for properties outside of 0.5 miles.

Less than a mile from the McLean Metro station, Vogelei said that CityLine Partners’ Scott’s Run South is another project to watch. The 6.6-million-square foot mixed-use development will feature 17 buildings, including residential, office and retail, according to the website for the design firm on the project, SmithGroup JJR. The Washington Business Journal reported in February that a hotel from boutique brand Archer is also coming to the site.

Vogelei also anticipates great outcomes for Clemente Development Company’s The View at Tysons, a mixed-used development near the Spring Hill Metro station. The project’s tower would reach 615 feet—60 feet higher the Washington Monument, InsideNova reported in August 2017. The project is slated to include a performing arts center, retail, hotel, luxury condominiums and office space, according to Clemente’s website. The project is currently still in zoning stages.

Commercial development has even stretched to Northern Virginia stations that aren’t open yet, including Reston Town Center—part of the second phase of the Silver Line, expected to open in 2020.

In February, Boston Properties announced that Fannie Mae pre-leased approximately 850,000 square feet of office space at its Reston Gateway development, which is being built in walking distance of the forthcoming station. The mortgage association will occupy 85 percent of office space planned for the property, according to Pete Otteni, Boston Properties’ senior vice president for development.

Otteni said the project should be cleared for zoning by the end of July. At full buildout, it will feature 4 million square feet of office, residential and retail space.

Joe Ritchey, the executive vice president of agency leasing at Transwestern, said Fannie Mae’s decision to relocate to Reston Gateway is an example of how companies are trying “to attract, retain and maximize the productivity of a world-class workforce.”

Fannie Mae’s facility in a more suburban area of Reston “is quite nice, but they’ve elected to go near rail in a well recognized development and pay the additional rents associated with that,” said Ritchey, whose firm was not part of the deal. “I would say generally that’s an example of corporate tenants saying that attracting talent is more important than paying a low rent.”

Dan Pettine, an account executive at Bulldog Public Relations, serving residential and commercial clients, is also struck by Reston and the forthcoming town center station. “For commuters and those who travel for work, Reston is a town of convenience,” Pettine said. “It’s also an ideal location for thrill seekers who want a break from a busy city life in favor of an active, more bucolic lifestyle,” he continued, noting attractions such as the Reston National Golf Course and hiking and biking options on Lake Thoreau and the Washington & Old Dominion Railroad Regional Park.

Near the forthcoming Reston Town Center station, RH Reston Parkway I, LLC.’s VY / Reston Heights development is on Pettine’s radar. The development will include 89,000 square feet of ground-level commercial space, according to Trimmer (JBG Smith is managing the property). Multiple retailers including Super Chicken, Signature Thai, Allure Nails, Reston Kabob and the region’s first WillPower Functional Fitness, are expected to open this summer, according to a JBG press release from February.

Pettine points out that the complex’s residences—which range from $1,800 to $3,320, per month, as per the JBG Smith release—“is great for young adults who want to live alone or amongst friends or for young, growing families.”