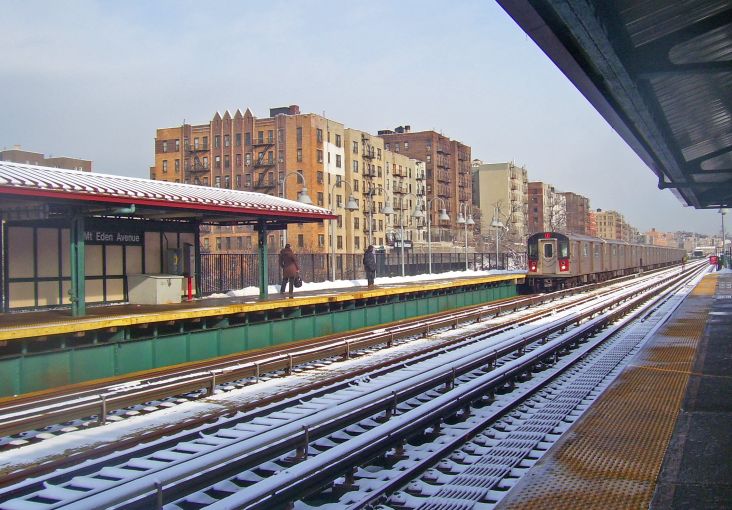 The elevated 4 train station at Mount Eden and Jerome Avenues, which is in the rezoning area. Photo: Daniel Case/Wikicommons

After nearly three years of meetings, protests and negotiations, the City Council has unanimously voted to approve the Jerome Avenue rezoning, which will transform 95 blocks of the central and southern Bronx.

The rezoning will pave the way for 4,600 units of new housing—including 1,150 permanently affordable ones—along Jerome Avenue in the next decade. The new land use framework will change the heavy commercial and industrial zoning along Jerome to mixed-use residential zoning that encourages the development of new mid-rise apartment buildings, community facilities and retail. The Jerome Avenue district will run from McClellan Street in the south to 184th Street in the north, passing through Highbridge, Concourse, Mount Hope, University Heights and Morris Heights. Jerome is the fifth of Mayor Bill de Blasio’s 15 planned neighborhood rezonings, following Far Rockaway, Queens, East Harlem, Midtown East and East New York, Brooklyn.

The area’s two city council members, Vanessa Gibson and Fernando Cabrera, negotiated a number of benefits from the city in exchange for the controversial rezoning. The de Blasio administration has committed to building two 458-seat elementary schools, launching a Southwest Bronx Housing Task Force that will preserve 2,500 units in the neighborhood over the next two years, and creating a preservation program that will develop anti-tenant-displacement strategies, backed by $200,000 for tenant organizing. Under the city’s Mandatory Inclusionary Housing program, any developer who builds along the Jerome corridor will have to set aside at least a quarter of their units as below-market housing, with at least 10 percent of the development’s units going to families earning 40 percent of the area median income ($34,360 for a family of three).

“After decades of broken promises and under investment, the Jerome Avenue neighborhood plan will bring lasting investment in the West Bronx and its people,” Gibson said in a statement. “I am proud to say the final plan includes significant investment in creating and preserving affordable and deeply affordable housing units, funding for two new schools in our overcrowded school districts 9 and 10, over $60 million for our parks—including two brand new parks in Community Board 4—and funds to fortify our small businesses and their workforce, especially the auto industry along the Jerome corridor.”

Activist groups like the Bronx Coalition for Community Vision—which filled the upper balcony with chants of “No rezoning!” and “Whose Bronx? Our Bronx!” during the council vote—have been pushing for the city to reduce the size of the rezoning and to include more low-income housing requirements for new development. And community advocates fear that low-income tenants and the many immigrant-owned auto shops along Jerome will be displaced by redevelopment in the wake of the rezoning. To quell those concerns, the city’s Department of Housing Preservation and Development is rolling out a certificate of no-harassment program, which will force landlords who want building permits to prove that they haven’t harassed their current or previous tenants in the last five years. And for the repair shop owners, city Department of Small Business Services agreed to develop training programs for auto workers, hire a workforce development coordinator that would work with auto-related businesses, and administer a $1.5 million grant pool to help displaced business with relocation costs.

As part of the deal, the city is kicking in $189 million for parks and streetscape improvements. That funding includes $25 million for a new park at Grant Avenue and East 149th Street and $50 million for pedestrian upgrades, crosswalks, lighting under the elevated subway tracks, bus stops and new New York Police Department security cameras.

“It is fitting that the council has adopted the Jerome Avenue Neighborhood Plan on the two-year anniversary of Mandatory Inclusionary Housing, a program that will bring a meaningful measure of permanently affordable housing to the Jerome Avenue corridor,” she said in prepared remarks. “In addition, the neighborhood plan paves the way toward a safer, healthier and more vibrant community.”