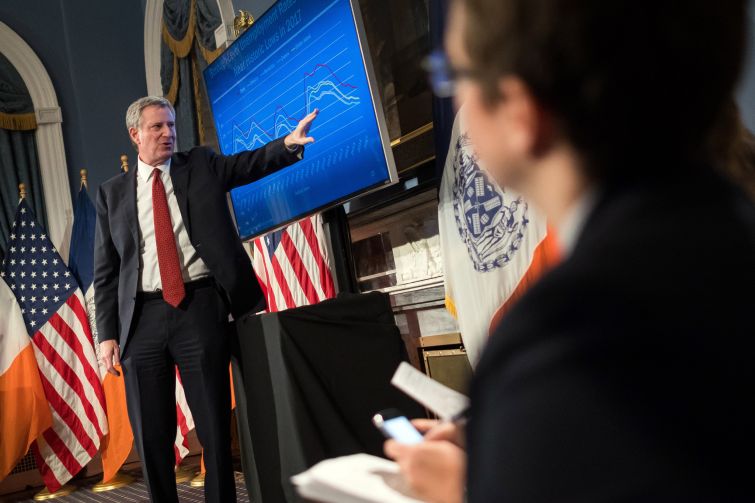 In documents released yesterday, the city revealed that it would increase spending by $2.6 billion over this year’s budget, which was adopted by the city in June 2017. The mayor’s office declared that President Donald Trump’s federal tax legislation—which was passed in December 2017 and spelled trouble for high-tax Democratic states like New York—was the “most draconian tax law in recent history.”

“While the city is still analyzing the budgetary impacts, the facts are clear: middle- and lower-class New Yorkers will pay,” de Blasio said in a press release. “This budget continues to provide the services New Yorkers rely on, while preparing for potential hits to New York City.”

Cuts in federal funding and the decline of corporate tax rates pose a $700 million financial risk to New York City, the mayor’s press release continues. The city faces an estimated loss of $100 million annually because it lost the ability to refinance with tax-exempt bonds this Jan.1. And the Trump administration’s decision to slash corporate tax rates has hurt the value of Low Income Housing Tax Credits, which help finance hundreds of millions in affordable housing development in the city every year.

Despite the cuts, the city is launching a handful of pro-tenant initiatives. The new budget includes $5.7 million for a pilot program to help homeowners legalize basement apartments in East New York, Brooklyn. The Department of Housing Preservation & Development will offer low-cost financing to help subsidize basement conversions as part of the program, which will begin next month. As a condition of accepting city subsidies for the basement work, landlords will have to sign a regulatory agreement with HPD and keep the newly legalized units rent stabilized. The city expects to spend $12.5 million over three years on the initiative, which includes the costs of retrofitting basements as well as relocation costs for existing tenants. During a press conference yesterday, the mayor predicted that the program could unlock up to 5,000 basement apartments citywide.

Chhaya Community Development Corporation, a nonprofit that advocates for South Asian communities in Brooklyn, Queens and the Bronx, has pushed for a basement legalization program since 2008.

“We’ve always viewed this as kind of a straightforward, cost effective way of bringing over 100,000 units into the affordable market,” Chhaya CDC’s director, Annetta Seecharran, told Commercial Observer in a recent interview, “without investing hundreds and hundreds of millions in building new units, when you already have these new units like this that can be legalized with some administrative and code fixes in the city. Many of them are elderly homeowners who are banking on the income of basement apartments to keep their homes. It’s of tremendous benefit for keeping folks in communities they want to be in.”

The city is also injecting $7 million into the DOB budget so that inspectors can enforce a new package of anti-tenant harassment laws that protect renters from hazardous or illegal construction.

And after 15,000 public housing tenants lost heat in their apartments during a winter storm last month, the mayor made a public commitment as part of the budget to upgrade boilers in New York City Housing Authority buildings. The plan promises $200 million to replace and repair heating systems at 20 NYCHA developments, and an additional $9 million in capital funding for rapid response teams to handle boiler failures in public housing. The administration also pledged an additional $300 million in capital funding for NYCHA over the next nine years.