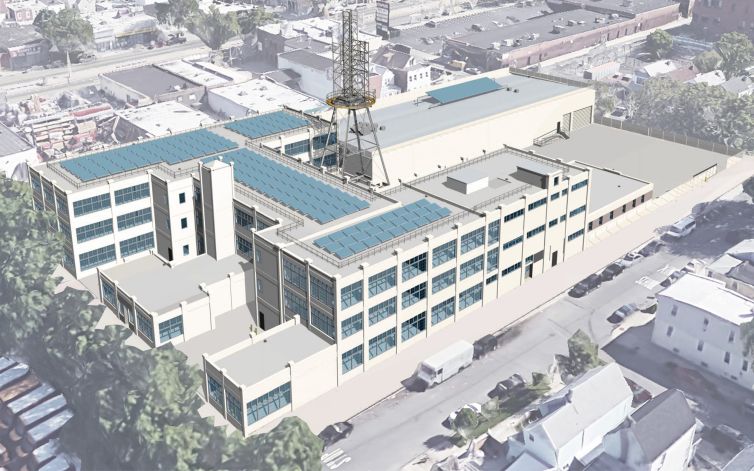 A rendering in Revit. Image: Greenpoint Manufacturing and Design Center

Greenpoint Manufacturing and Design Center, led by chief executive officer Brian Coleman, has inked financing totaling $40 million from three lenders to acquire and redevelop an industrial project in Ozone Park, Queens, according to documents filed today with the city.

The intricate accounting behind the project, at 94-15 100th Street, also includes public grants and tax breaks. The deal was arranged in-house at GMDC, which has a development staff of only three people, without the help of a broker.

Drawing on financing from Sterling Bank, Chase Bank and the Partnership Fund for New York City, Coleman’s nonprofit purchased and plans to redevelop the 85,000-square-foot bicycle factory into a multi-tenant manufacturing building. The project, slated for completion in spring 2019, will feature units from 1,200 to 9,000 square feet, which tenants will be able to subdivide or combine to accord with their needs, GMDC said.

The group, founded in 1992, purchased the former Worksman Cycles factory last month after a nearly yearlong closing process. A $14.6 million loan from Chase funded the acquisition, while the additional financing from other sources will go towards the gut renovation, documents filed with the city show.

“The building is in poor shape right now,” Coleman said. Tax credits for preserving historic structures will aid in the rebuilding, but eligibility for those programs requires meeting strict standards. National Parks Service, which oversees one of the tax credits granted to the development, demands that developers go to great lengths to preserve buildings’ historic character.

“The NPS requires we do an extensive, detailed renovation of the facade,” Coleman said, adding that he plans to spend over $1 million just to replace the building’s windows. “We’ll also have all new elevator and electrical system. And there’s site work to be done,” he added.

According to the New York City Economic Development Corporation, which late last year awarded a $10 million grant and a $3.7 million loan to the project, the factory may spur as many as 80 new “living-wage” jobs.

“The average job in one of our buildings is $50,000 a year,” Coleman said, adding that these typically full-time positions offer benefits far beyond those available in competing service-sector jobs.

That result has endeared GMDC to the Partnership Fund for New York City, a private fund backed by corporate sponsors with a mission to spur employment in the five boroughs.

“We’ve worked with [GMDC] a couple of times because their mission is aligned with what we’re trying to achieve,” said Maria Gotsch, the president and CEO of the fund. “They’re charging rents that are at market and slightly below. And they’re only signing for these kinds of tenants” who will create manufacturing jobs.

Asking rents at the factory space will be between $13 and $18, Coleman said.

The new manufacturing complex, which the GMDC said will host 15 to 20 small firms, will be the organization’s eighth such venture in New York City, five of which it still owns and operates. At 1102 Atlantic Avenue near Prospect Heights in Brooklyn, the group’s most recent completed project, tenants include an electronic manufacturer, a woodworker and a special-effects design studio. Its building at 7 St. Nicholas Avenue, in Bushwick, Brooklyn, hosts an apparel company and a furniture restorer.

Attracting tenants means creating flexible spaces, Coleman said, and targeting them towards small firms looking for digs in a crowded and expensive market.

“The industrial market has been under siege,” the GMDC founder said. Because their success requires coordinating multiple avenues of government support, “our deals are typically very complicated. But we’ve been doing this for a while now. We know what types of spaces the market is looking for.”

Before its tenure as a bicycle factory, the building served as home to a soap manufacturer and a candle company. Gov. Andrew Cuomo suggested adding the building to the state’s list of historic properties only in early November. Ed Wendell, a Queens historian interviewed in Queens Chronicle, voiced skepticism at the site’s value as a landmark, but said that he was “very happy when anything in Queens gets considered.”

Representatives from Chase, Sterling Bank, the Partnership Fund for New York City and the Empire Development Council did not immediately respond to requests for comment.