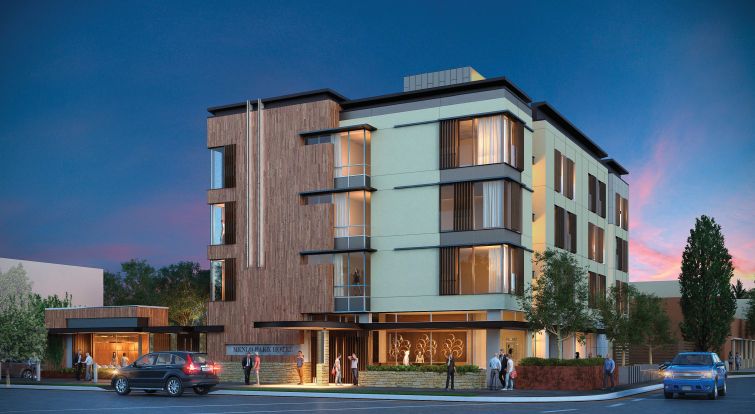 Park James Hotel will be constructed at 1400 El Camino Real, on the main thoroughfare that connects cities up and down the San Francisco peninsula. HSF expects the hotel to open for business in May 2018, according to the announcement.

The project “presented us with the opportunity to finance a high-quality, luxury boutique hotel product that is in high demand in Menlo Park, minutes from Stanford University and the headquarters of some of the world’s most influential companies in neighboring Palo Alto,” Mike Jaynes, president of HSF, said in a statement. “The hotel market in Menlo Park is currently very strong and we are confident that the Park James will be a great success.”

Once a placid hamlet that was home to Joan Baez and Jerry Garcia, Menlo Park has developed along with the tech industry that has sprung up in every direction around the city’s central Silicon Valley location. Facebook moved to town in 2011 to set down roots on the former Sun Microsystems campus. And Stanford attracts 150,000 visitors per year, according a visitor-services representative.

That brisk market is augmented by a phenomenon Berean described as “compression.” When hotels in San Francisco, 25 miles north, fill to capacity during conventions or sporting events, other guests are forced to seek rooms farther afield, boosting demand as far away as San Jose—nearly 20 miles south of Menlo Park.

Lodging competitors in the city include a string of chain and independent motels, as well as the Stanford Park Hotel, a four-star, 162-room inn. Rosewood Sand Hill, a five-star resort, occupies seven acres in the city’s far southwest, about three miles from the business district. Park James, on the other hand, will be just a five-minute walk from downtown.

That location will make it something of a swanky pioneer among a broad population of budget accommodations, Berean said. But the trend towards pricier rooms doesn’t surprise him.

“We’ve started to see some of these economy, budget hotels go to boutique branding,” Berean said. “They’re getting good rates, they’re getting good occupancy. They’re betting they can still thrive while they drop franchise fees.”

Facebook’s headquarters occupies a 200-acre campus in the city’s extreme north along San Francisco Bay, and venture-capital offices dot the sunny, tree-lined stretch of Sand Hill Road that abuts Stanford University to the southeast. But residents of Menlo Park have been split on the question of future development.

A vocal citizens’ group championed a ballot measure in 2014 that would have set a strict cap on commercial zoning, but the law was voted down 61-39 after a lively campaign.