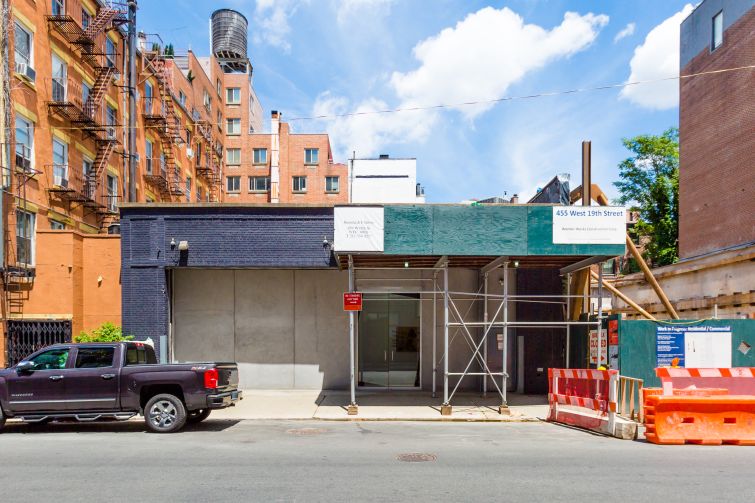 A former associate of the Gambino crime family who was convicted of inflating trash collecting costs in New York City 20 years ago has sold the Chelsea property where he ran his garbage-hauling business.

Joseph Francolino Sr. unloaded 459 West 19th Street between Ninth and 10th Avenues for $20 million, according to public records filed with the city today. The single-story commercial building was home to Francolino’s trash pickup business, Duffy Carting and Recycling Company, from 1974 until 2000, according to state records. However, the building’s most recent occupant was a gallery called Postmasters, which recently relocated to Tribeca.

It’s unclear who bought the property from Francolino. The entity listed on the deed is an LLC registered in Delaware, and the authorized signatory is Sharon Gray. The real estate attorney who handled the sale declined to comment. Francolino did not return a request for comment.

The squat, gray building is only 3,800 square feet, but zoning would allow a 22,800-square-foot residential building to be constructed there. At one point, Cushman & Wakefield was marketing the property for an undisclosed asking price. The listing touted the site’s proximity to the High Line, which is just west of 10th Avenue, and noted that it would be an ideal place for a luxury condo project. The brokers on the listing, Billy Simons and Brock Emmetsberger, did not return requests for comment.

In 1997, Francolino was found guilty of violating the state’s Organized Crime Control Act, The New York Times reported. Prosecutors reportedly called Francolino “a soldier in the Gambino crime family” and an “organized crime chieftain in the carting industry.” Then-District Attorney Robert M. Morgenthau estimated that Francolino, as well as other executives in the private trash-removal business, inflated garbage collection costs for 200,000 commercial customers by up to $400 million a year. As the head of the disbanded Association of Trade Waste Removers of Greater New York, Francolino helped Mafia bosses set prices and prevent outside companies from threatening their monopoly on the trash business, according to the Times.

Update: This post has been updated to include details about the LLC that purchased the property.