The Playmaker: Savills Studley’s David Carlos Is the Go-To Guy for NYC’s Nonprofits 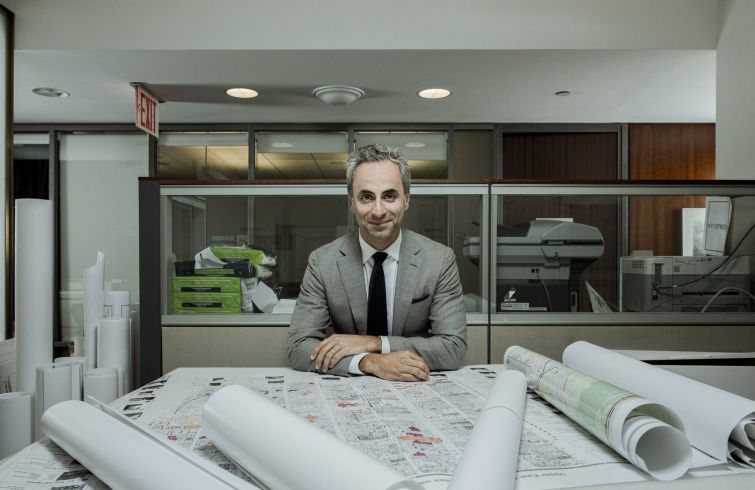 For most commercial real estate brokers, the idea of working on a single deal for years on end would be unpalatable. In a demanding, intense business where time is money, expediency and prolificacy are highly valued.

But for David Carlos, that’s just not how things work.

Over the past decade, the Savills Studley senior managing director has built one of the top-producing teams at the brokerage by taking the opposite approach. Working predominantly with not-for-profits like hospitals, universities and religious organizations, Carlos advises those clients—who are usually far from familiar with the intricacies of zoning, land use and development—on often-convoluted transactions that frequently take years to come to fruition.

“We do more work in this area—helping nonprofits solve complicated real estate problems—than anybody else in the city,” Carlos told Commercial Observer earlier this month at Savills Studley’s offices at 399 Park Avenue in Midtown. “It’s an area that we’ve chosen to focus on; New York State leads the country in not-for-profit entities, and half of those entities are in New York City.”

That focus on the nonprofit sector has reaped sizable returns for Savills Studley, which specializes in tenant representation, as well as industry acclaim for Carlos himself. In 2016, Carlos and his team closed $336 million in nonprofit investment sales alone, a haul that helped earn him the firm’s top producer award last year (given annually to the highest-producing Savills Studley broker who has not already won it twice in the past).

And in April, Carlos and his partner Ira Schuman received their second Most Ingenious Deal of the Year award in three years from the Real Estate Board of New York for their work with the Jewish Theological Seminary (JTS). The pair advised the religious-based academic institution for nearly three years on a series of transactions that generated more than $131 million in real estate sales and helped finance JTS’ transformation of its Morningside Heights campus via a new 100,000-square-foot building. (Carlos and Schuman previously received the REBNY award in 2015 for their work helping Congregation Habonim find a new home on the Upper West Side.)

The 40-year-old Carlos, who lives in the Westchester County town of Larchmont, N.Y., with his wife and four children (ages two-and-a-half through seven), took a relatively unorthodox path to his career as a commercial real estate broker. The youngest of eight children born to Portuguese parents who immigrated to the U.S.—“They had a tough go of it and sacrificed their lives to give us a better shot,” Carlos said of his parents—he grew up in Waterbury, Conn., and was the only one of his siblings born in the States. He went to Cornell University, where he majored in consumer economics and was captain of the varsity soccer team. (He also had a brief stint playing professionally for a second-division side team in Portugal, where he says he “warmed the bench.” Carlos, whose wife is Jewish, will represent the U.S. at the Maccabi Games in Israel this summer as a member of the over-35 soccer team.)

Soon after graduating from Cornell, Carlos found a job at branding and marketing consultancy Landor Associates, a subsidiary of advertising and communications firm Y&R, formerly known as Young & Rubicam. His work as a branding consultant at Landor led to a three-year stint helming the firm’s Asia Pacific region operations out of its offices in Hong Kong—where, as Carlos put it, he was “a 23-year-old kid telling Malaysian CEOs what they should be doing” with regards to their branding strategy.

Carlos eventually returned to New York with Landor and in 2003 found himself working with a new client: Julien J. Studley Inc., as the brokerage was then known. The firm had recently undergone a significant change in management (a group of brokers had just completed an internal takeover of the business after buying out founder Julien Studley and his partners), and Julien J. Studley had retained Landor to help it reposition the brokerage’s brand and image.

“It became very apparent right away that the person driving the project was [Carlos],” Michael Colacino, the president of Savills Studley, recalled. “His rebranding efforts for the company really propelled us to where we are today—that we should think of ourselves as only doing the most complicated projects and let the simple things go to our competitors.”

Before long, Studley had persuaded Carlos to join the firm and lead its branding and marketing efforts internally (he played a role in the company’s name change to Studley Inc.). But Carlos said it soon became obvious that, if he really wanted to make an impact at the brokerage, it wouldn’t be through branding. “Very quickly, I realized that in order to be successful long-term at this company, you really needed to be on the front lines—the brokerage side, the revenue-generating side,” he said.

After two years as Studley’s branding director, Carlos made the transition to a career as a broker at the firm in 2006. He began working with Schuman, an executive vice president at Studley who has been with the company since 1978 and has mentored some of the firm’s top executives. (“Ira is a remarkable guy; he trained me,” Colacino said of Carlos’ now partner.)

Carlos described his switch into the brokerage business as “a big transition” as far as picking up on “the nuts and bolts of leasing and investment sales.” While Schuman echoed that sentiment—“When he started, he didn’t know anything,” he noted with a chuckle—he cited Carlos’ work ethic and smarts as critical to his ability to eventually learn and adapt to the new role.

“To a very large degree, David’s success is attributable to his hard work and brains,” Schuman said. “Nobody is born knowing anything about how to be a good real estate broker. [But] you’ve got to have the right raw material.”

Together, Carlos and Schuman have built a brokerage operation catering to not-for-profit clients (previous clients include the New York Public Library, the City University of New York, Brooklyn Law School and New York–Presbyterian Hospital) that goes far beyond the traditional leasing and investment sales platform that constitutes most commercial brokerages’ core business.

The pair and their team of six work with nonprofit clients on deals—usually involving property sales and purchases—that are often made complex by those clients’ specific space use requirements. That could entail an educational institution that needs dormitories, classrooms and dining halls in close proximity to each other, or a religious organization that needs to accommodate places of worship alongside offices and community spaces.

“There are more complicated zoning, land use and legal restrictions, and clients have needs in all different areas,” Schuman said. “To a large degree, the solutions don’t exist in [property] listings and can be crafted in any number of ways. You never know what you’re going to be up against when you do a project.”

And in addition to having stricter financial considerations than for-profit businesses, nonprofit organizations are usually organized differently in a manner that can prolong, if not derail, transactions.

“With a private sector company, the CEO can make a decision and that’s it—you go and you do it,” Carlos said. “With a nonprofit, it’s much more complicated; there’s leadership, there’s a board [of directors], and you have to build consensus. From that perspective, they’re completely different animals.”

According to Carlos, the typical transaction involving a nonprofit client takes two to four years to complete from start to finish, and he cited one pending deal for an undisclosed client that Savills Studley has spent 11 years on. “These are more esoteric deals that are extremely complicated and require a level of attention and stick-to-it–iveness that most ordinary deals don’t,” he said.

Despite those challenges, many New York City-based nonprofits find themselves holding valuable real estate assets that can make any property sale a lucrative proposition capable of bolstering their coffers—and so they turn to Carlos and his team to help them capitalize on the situation.

Marc Gary, the executive vice chancellor and chief operating officer of JTS, said that he met with Carlos and Schuman after seeking a closer examination of the organization’s real estate assets and “whether we were using them in the most beneficial way.”

After expressing his concerns about the institution’s outdated campus library—which JTS had initially planned to upgrade through a $20 million capital improvement plan—as well as its lackluster residence halls, Gary said Carlos returned with a comprehensive “options book” of numerous different approaches the organization could take in addressing its issues.

After narrowing the choices down and fleshing them out further, Gary said he was most drawn to a plan that would see JTS build an entirely new library as well as new residence halls that would create more of a 24/7 campus environment.

It would take almost three years, but Carlos and his team eventually spun a web of transactions that included the $96 million sale of a portion of the JTS campus at 3080 Broadway and an off-campus dorm building on West 120th Street—plus more than 250,000 square feet of air rights—to developer Savanna (which has since planned residential condominiums on the former campus parcel, at 543 West 122nd Street). In addition, JTS offloaded another dorm building, at 3060 Broadway, for around $35 million to Esplanade Partners.

The deals also included several leaseback agreements as well as a city-issued tax-lot subdivision that allowed the transaction with Savanna to go through. The arrangement was the first time that the city allowed a tax-lot subdivision on a nonvacant property, according to Carlos, who said Savills Studley had to persuade the city that the zoning change was imperative to sealing the transaction and insulating JTS from risks associated with sharing a tax lot with a private developer.

All things considered, JTS ended up monetizing its real estate assets to the tune of more than $130 million and is using that capital to help fund a new, 100,000-square-foot campus building that will give the institution its desired state-of-the-art library, as well as an on-campus student residence hall, an auditorium and conference facilities. Work on the new building broke ground last week with the development slated for completion in 2019.

“To shepherd a transaction of this size, scale and complexity to an outcome that allows both the buyer and seller to end up in what they feel is a terrific place is quite a feat,” Nicholas Bienstock, the co-managing partner of Savanna, said of working with Carlos on the JTS transactions. “David understood the complexity of the project, and that allowed [his team] to intermediate and be creative problem-solvers to get a deal done.”

Gary provided a similarly rapturous assessment of his experience working with Carlos, describing him as a “calming influence” for clients like JTS. “You always understand that he’s not trying to change what’s important to you,” Gary said. “He accepts that, and says, ‘How can we achieve that?’ He’s one of those people who you just enjoy having in the room.”

Somewhat ironically, given the fairly nontraditional career arc that led to his becoming a real estate broker, Carlos attributes his success in working with clients to his start in the consulting field. “That’s how I view my job here: I’m a consultant,” he said. “Previously, I was helping [clients] make decisions about branding and marketing; now I’m helping them make smart decisions about real estate.”

And while he does also have clients who are not nonprofit organizations, like your more traditional law or financial services firms, Carlos appears to take genuine pleasure in helping schools and community organizations find solutions that mean they’ll be better off in the future.